With Disney Parks around the world closed for the foreseeable future, WDWNT is dipping into our archives of vintage parks materials for a look back into parks history! Only today, we’re visiting a park that never was: Disney’s America! 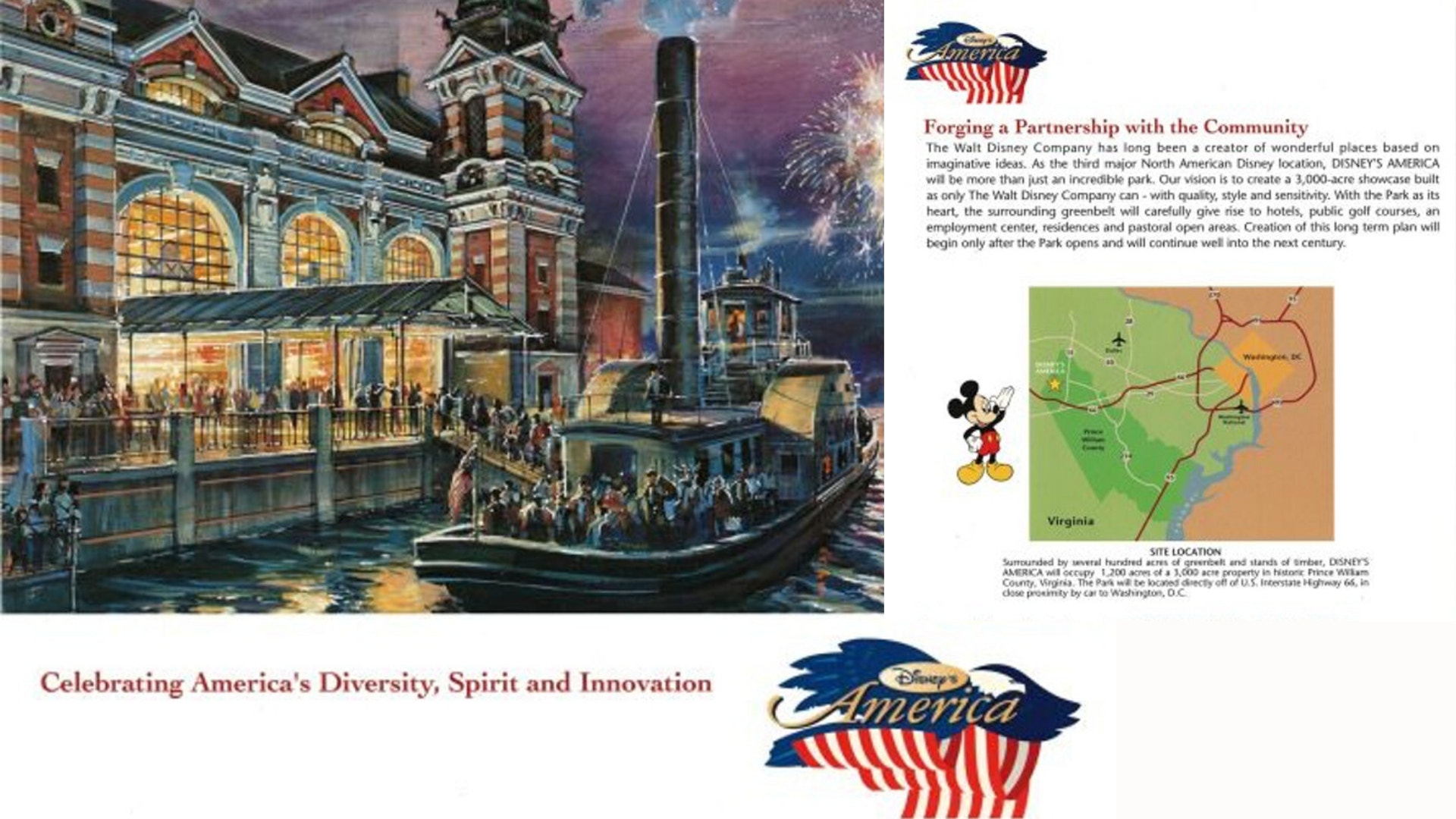 Note: This article will detail the brochure page by page, but WIGS Members will have access to download a full-resolution PDF of the entire thing. Head on over to Patreon.com/wdwnt to join WIGS, the WDWNT Inner Globe Society, for as little as $2 a month and unlock access to great content like this, and much more! 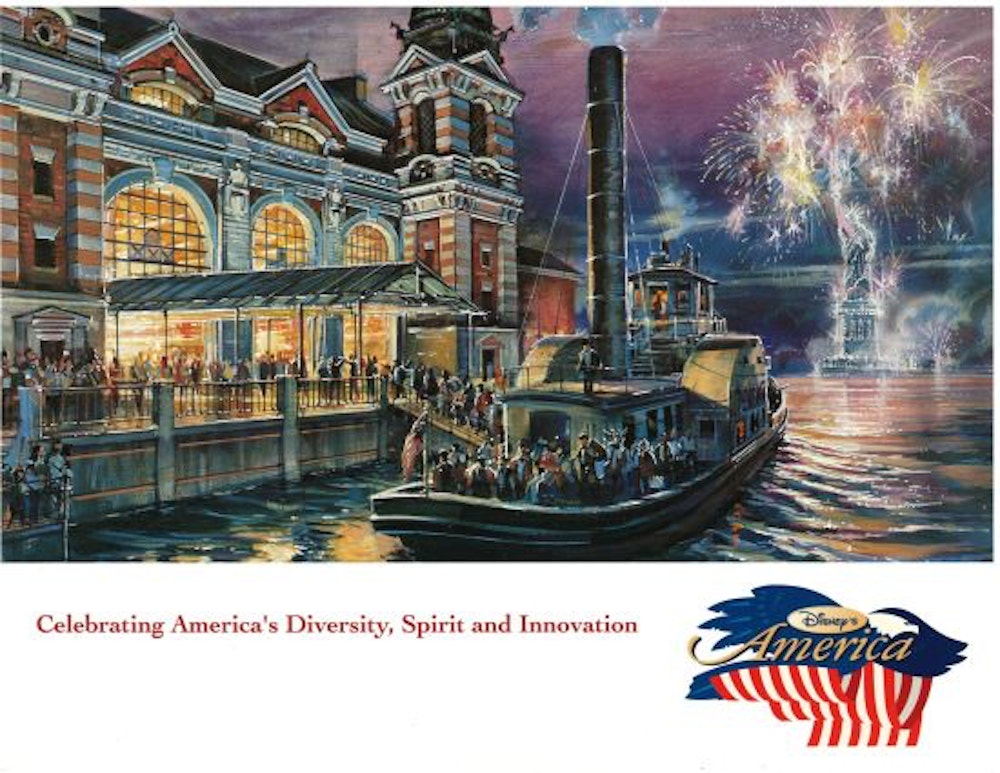 If you were following our WDWNT March Madness tournament this year, you may recognize the above image as the entrance to We the People, a widescreen 3-D attraction featuring the story of immigrants arriving at Ellis Island, all told through the perspective of the Muppets. 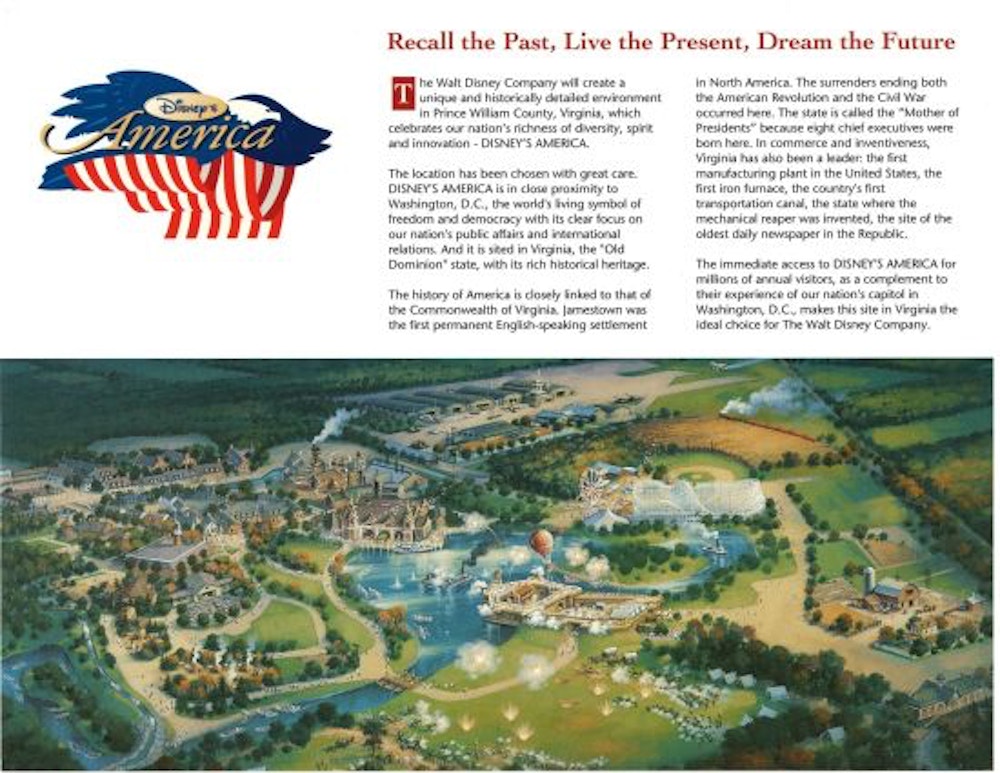 Originally planned to be built in Prince William County, Virginia, just a few miles from Manassas National Battlefield Park, Disney’s America would’ve explored American history and the cultures that make up the nation. Unfortunately, due to push-back from historians and grassroots citizens’ groups, the park was officially abandoned in September 1994, less than a year after it was announced. Still, it is fun to read this brochure and wonder what could have been. 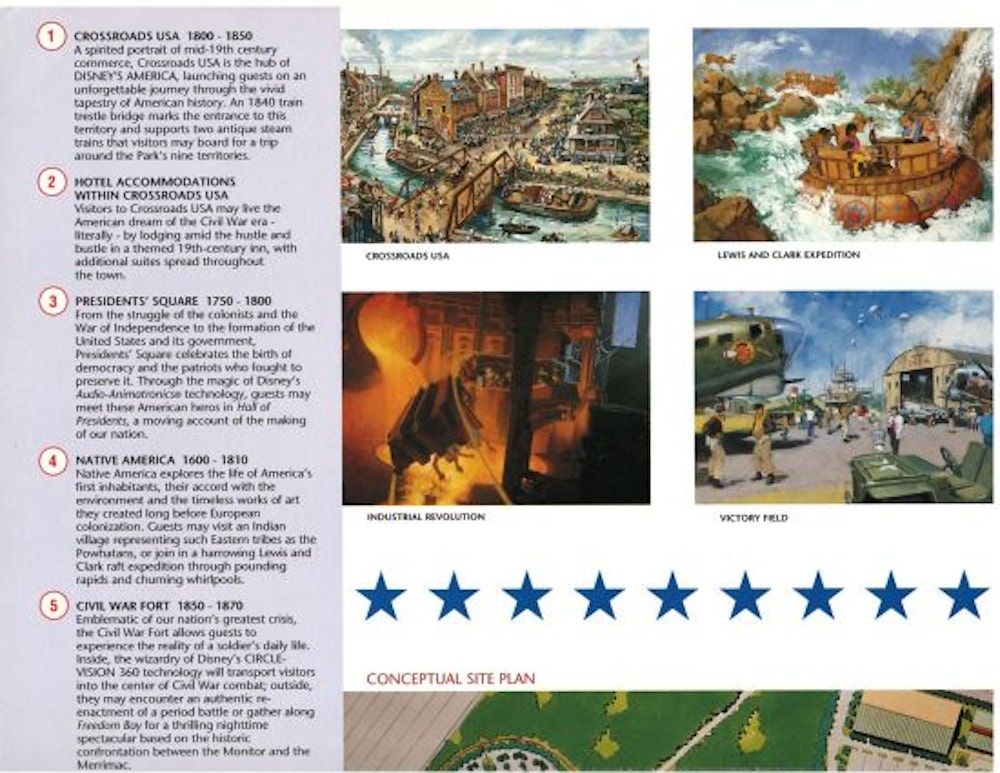 The above and below pages offer descriptions of the park’s nine lands and the eras they represent, covering over three centuries of American history, including Crossroads USA, Presidents’ Square, Native America, Civil War Fort, We the People, Enterprise, Victory Field, State Fair, and Family Farm. An interesting thing of not was that Disney was planning a new Hall of Presidents for the park, though its unknown if it would’ve been a copy of the Walt Disney World staple or a new interpretation of the attraction. Even more fascinating is that Disney was planning to have hotel accommodations within the park itself at Crossroads USA, a concept that would be revisited in Tokyo DisneySea Hotel MiraCosta. You can also see concept art for Crossroads USA, the Lewis and Clark “raft expedition” ride that would’ve been located in Native America, Victory Field, and the Industrial Revolution roller coaster at Enterprise. 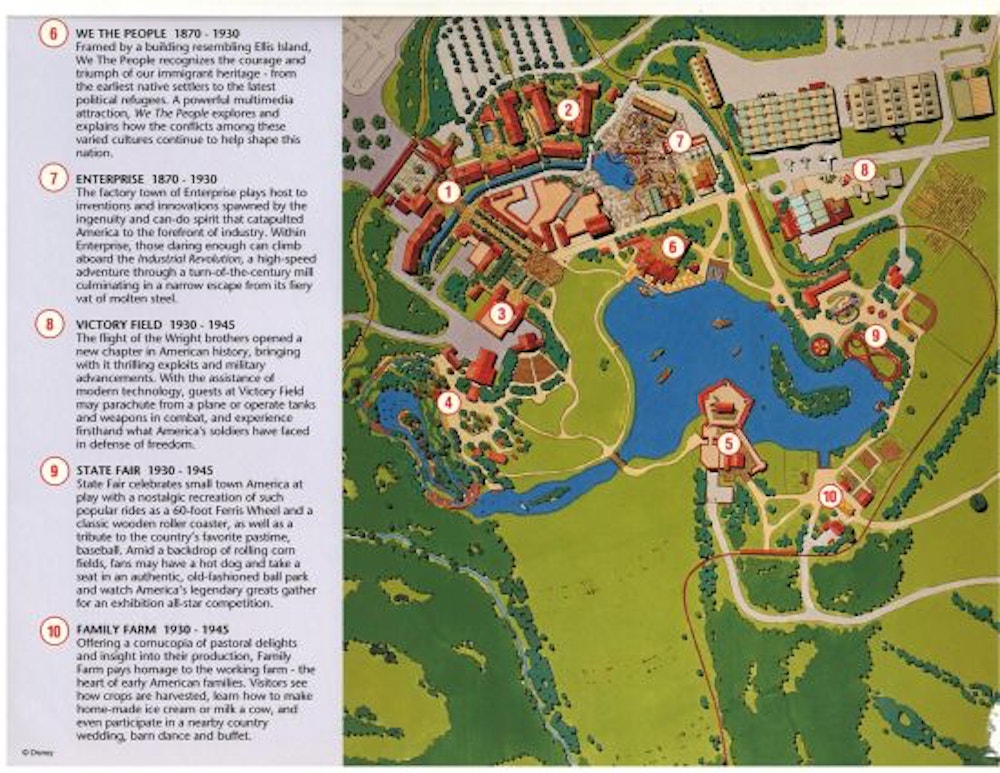 The above page shows how the park would have been laid out around a lagoon. 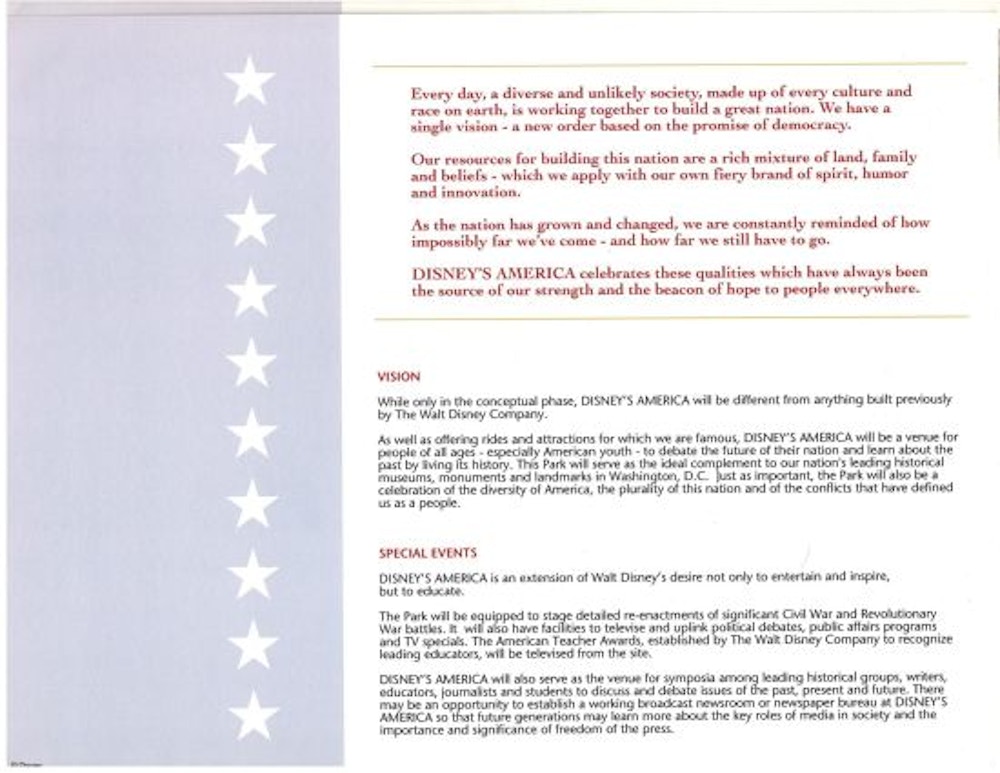 There are two passages on this page that I think sum up what Disney’s America was all about:

“Every day, a diverse and unlikely society, made up of every culture and race on earth, is working together to build a great nation. We have a single vision – a new order based on the promise of democracy.

Our resources for building this nation are a rich mixture of land, family and beliefs – which we apply with our own fiery brand of spirit, humor and innovation.

As the nation has grown and changed, we are constantly reminded of how impossibly far we’ve come – and how far we still have to go.

DISNEY’S AMERICA celebrates these qualities which have always been the source of our strength and the beacon of hope to people everywhere.”

I think this passage speaks to the high-minded ideals (and perhaps its hubris) behind the park:

“While only in the conceptual phase, DISNEY’S AMERICA will be different from anything built previously by The Walt Disney Company.

As well as offering rides and attractions for which we are famous, DISNEY’S AMERICA will be a venue for people of all ages – especially American youth – to debate the future of their nation and learn about the past by living its history. This Park will serve as the ideal compliment to our nation’s leading historical museums, monuments and landmarks in Washington, D.C. Just as important, the Park will also be a celebration of the diversity of America, the plurality of this nation and of the conflicts that have defined us as a people.” 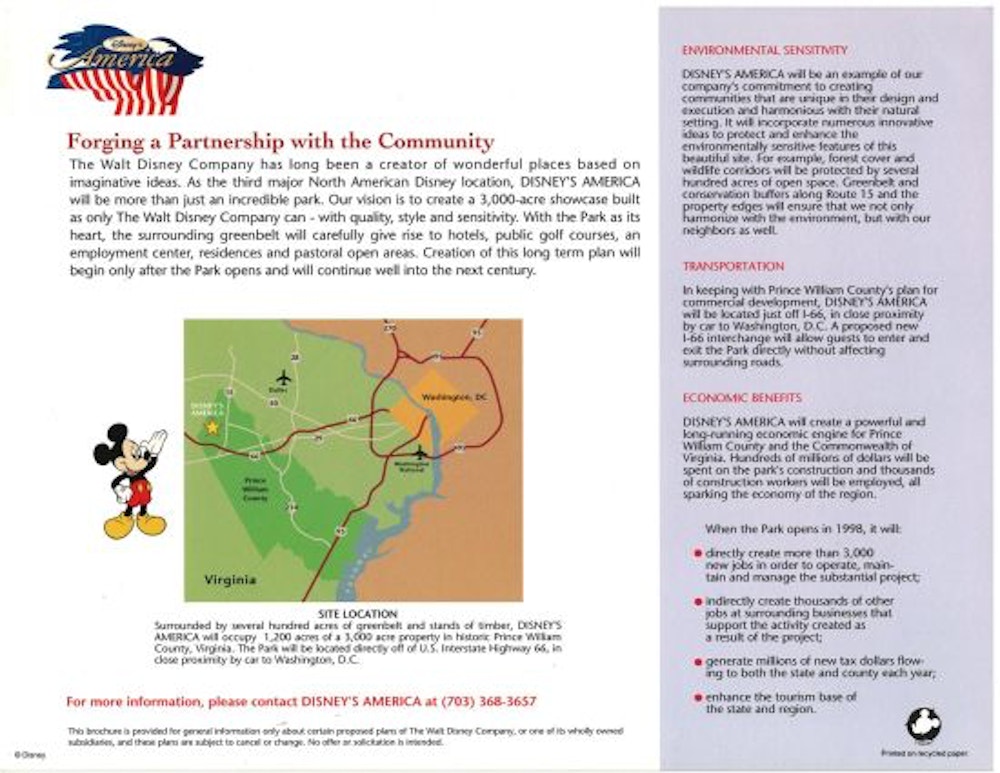 It certainly is interesting to consider how the park would have embraced the often solemn and complicated history America has in a tasteful but still entertaining fashion, or how it might have fallen short. Even though the park may have never happened, Disney’s America can still inspire debate and discussion on the balance between entertainment and respectfulness. And that’s not a bad legacy at all.

Next
New “Prop Culture” Series on Disney+ Will Venture Into Disney Archives, Attractions, and More; Full Series Debuts on May 1