With the Coronavirus (COVID-19) pandemic shutting down most events and theme parks throughout the country for an even lengthier period of time, Walt Disney World Resort and Disneyland Resort have announced that they will temporarily extend closures “until further notice” out of an abundance of caution for their Cast Members and guests. 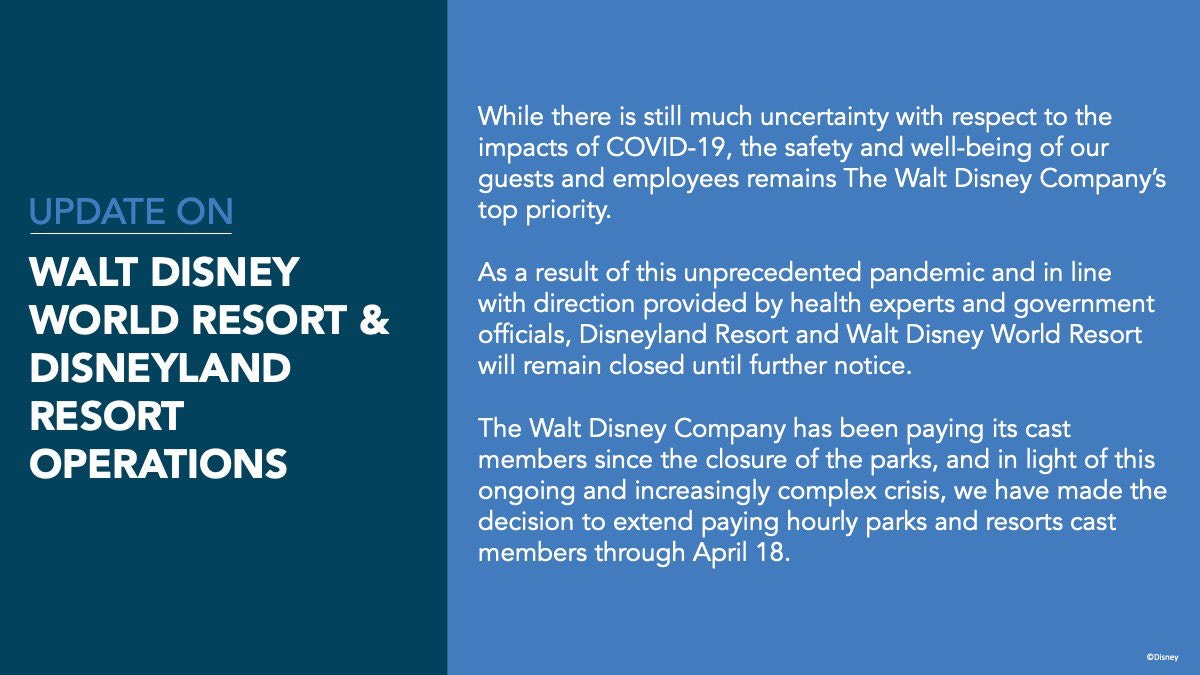 The closure was originally stated to only last through the end of the month, but Disney officials have noted that they are monitoring the developments. Hourly parks and resorts Cast Members will continue to be paid through April 18.

Walt Disney World and Disneyland hotels remain closed at this time, as well as Disney Springs and the Downtown Disney District. This is the advisory currently posted on the Walt Disney World website. If calling in to cancel or modify your reservation, do be patient as phone lines are experiencing lengthy waits, and online portals are also glitchy from increased traffic.

Walt Disney World Resort was the last Disney resort to close for the ongoing pandemic. Shanghai Disney Resort was the first to close, but has recently opened up areas of the resort, not including Shanghai Disneyland itself. Currently, Hong Kong Disneyland Resort and Tokyo Disney Resort remain closed. Disneyland Paris was also announced closed alongside the original Walt Disney World closure announcement, but also extended the closure due to further lockdowns across France.

Guests with packages booked through the Walt Disney Travel Company may currently reschedule for a “future date in 2020” without having to pay the $50.00 change fee.

Previous
Keeping the Disney Magic Alive with #DisneyAtHome – Send Us Your Submissions!

Next
SHOP: New Mulan and Mushu Pandora Charms Bring Honor to Us All on shopDisney