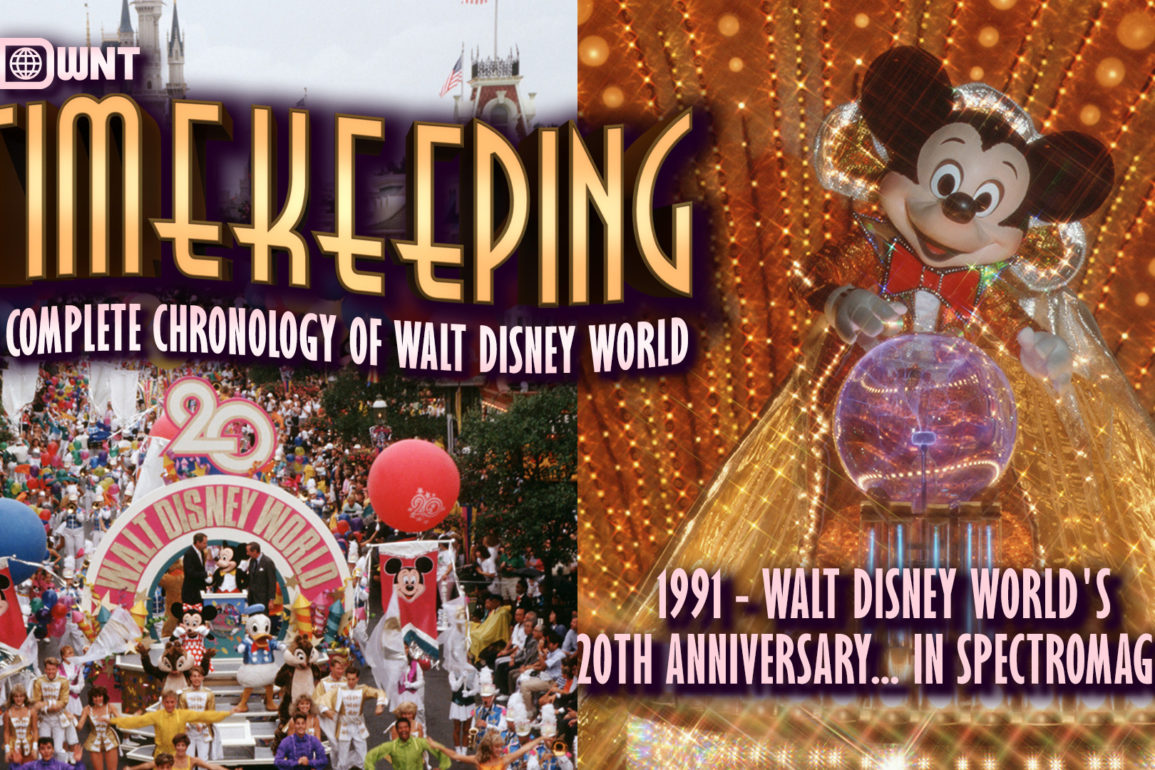 1991 was another year of expansion at Walt Disney World. While the older portions would see some minor changes, the resort also saw some new and memorable additions. New parades rolled down Main Street U.S.A, new shows debuted at Disney-MGM Studios, and new hotels greeted guests for the first time. These new offerings would see varying levels of success. Some only lasted six weeks, while others continue to operate today, 30 years later.

On Main Street, the Emporium underwent a remodel, and the Fire Station was temporarily turned into a gift shop. In Frontierland, changes began in preparation for Splash Mountain. The Frontierland Railroad Station, which closed in November 1990, reopened in its current location in December 1991. During that period, the Railroad was not closed, but instead ran in a shuttle mode forward and backwards.

The original Briar Patch store closed and would reopen December 16 in its new location as part of the Splash Mountain area. Bearly Country closed to become Prairie Outpost & Supply on February 25. The Tricornered Hat Shoppe was renamed the Trail Creek Hat Shop. In Tomorrowland, the Film and Glow cart was removed, and on June 28, Mickey’s Mart became Mickey’s Star Traders.

As part of the 20th Anniversary celebration, the Magic Kingdom debuted not one, but two new parades. The afternoon Surprise Celebration parade began September 22, and SpectroMagic replaced the Main Street Electrical Parade on October 1.

Based on Disneyland’s Party Gras Parade, Surprise Celebration featured characters in traditional Mardi Gras masks and inflatable floats. Pinocchio characters kicked off the parade, followed by a giant Roger Rabbit float ridden by the rabbit himself. Stilt walkers and dancers were interspersed between all the major floats. Other floats and features in the parade included:

The final float was King Mickey, featuring the mouse himself flanked by Cinderella and Snow White.

SpectroMagic was the first-ever replacement for the Main Street Electrical Parade at any Disney theme park on the planet. Fiber optics supplemented the more traditional Christmas style lights and the synthesizer soundtrack gave way to a classical-style score more in line with the Disney animated films.

After an introduction by Jiminy Cricket, a group of masked trumpeters (SpectroMen) heralded the rest of the parade. The next units were spinning balls, piloted by more SpectroMen. These were colorful clown-looking figures who also rode a large float with a screen displaying the SpectroMagic name.

Next came Mickey riding a large float “conjuring” over a plasma ball. The back of the float was made to appear as an extension of his cape, connected to his back and flaring out into a huge cape of lights. Next, Roger Rabbit conducted a drumming Goofy and the golden harp from a float carrying a large metronome. Chip and Dale playing a piano followed, sliding all along the bench in a cartoonish fashion.

Next came a peacock float that flowed into a garden featuring Fauna, followed by garden floats featuring Flora and Merryweather, the three fairies from Sleeping Beauty. Illuminated dragonfly and butterfly dancers flanked the gardens.

The Little Mermaid unit, led by a large fish with spinning eyes, came next. Smaller fish floats followed behind it. Next came a large spinning Ursula. Ariel trailed her on a shipwreck float, with Sebatian conducting a fish orchestra, and King Triton in a chariot bringing up the rear.

Spinning, blinking fish came before the next unit: Fantasia. First was the Dance of the Hours with Ben Ali Gator spinning Hyacinth Hippo and ostrich Madame Upanova. More ostrich dancers accompanied a Bacchus float. Next was another train float representing the Pastoral featuring the pegasi. A giant opening and closing Chernabog float closed out the Fantasia unit.

For the incredible finale, the Big Bad Wolf prowled ahead of the Three Little Pigs. The float also featured Jaq and Gus at the helm of Cinderella pumpkin coach, and Alice and the White Rabbit in the Queen’s garden with the Queen of Hearts walking just a few steps behind.

Mary Poppins walked ahead of a working carousel, with the horses replaced with fanciful animals such as frogs, roosters, and even Dumbo the Flying Elephant. Peter Pan, Mr. Smee, Snow White, and 6 of the 7 Dwarfs lead the final float. The Evil Queen and Captain Hook, Dopey, Pinocchio, and Gepetto, and finally Donald, Minnie Mouse, and a puppet of Jimmy Cricket closed out the parade on a lengthy triple-float.

To really put the magic in Spectromagic, all of the finale units, and the characters on them, changed from black and white into color via a cascading effect timed perfectly to the music.

EPCOT Center saw few noticeable changes in 1991. However, a new lagoon show, Surprise in the Skies, debuted September 30 to run as part of the 20th Anniversary celebration.

Large, inflatable characters emerged from the rooftops of the World Showcase Pavilions:  Donald Duck in a sombrero and poncho in Mexico, Viking Goofy in Norway, Chip and Dale climbing each other in China, Daisy in a flower wreath in Germany, Pinocchio playing the accordion in Italy, Minnie Mouse in a kimono in Japan, Tigger in Morocco, Pluto with a beret in France, Robin Hood in the UK, Pooh in a Mountie Uniform in Canada, and finally, Uncle Sam Mickey Mouse at The American Adventure. The paragliders and more dancing kites then returned with more fireworks.

The 20th festivities, and even the Carnivale/Mardi Gras theme, also extended to a character show where the gang arrived via Omnibus and held a Mardi Gras-style celebration on World Showcase Plaza. The characters would then be available to guests as a meet and greet for a few moments.

Here Come the Muppets would close on September 2nd. However, MuppetVision 3D would already be open by May 16. This 3D film would be the first to utilize extensive in-theater effects including water, bubbles, wall projections, animatronics and live actors.

The show would feature a pre-show across multiple screens, highlighting the typical Muppet sense of humor. Once in the theater, the Muppets would introduce us to their new technology, Muppet Vision. Of course, everything goes wrong, as a sentient 3D effect called Waldo is created, disrupting the show and leading to the destruction of the theater. For a deeper dive on MuppetVison 3D, check out our recent show on the complete history:

Also in the area, the Studio Showcase attraction would open on September 29 in the building that is now PizzeRizzo. This would feature props and costumes from different films. The Studio Pizzeria opened on June 15, but soon became Mama Melrose on September 26. This same day the Dinosaurs Live! Show premiered.

The Sci-Fi Drive-In Diner opened April 20 and allowed guests to dine in a car at a drive-in movie theater as clips, trailers, and ads representing science fiction of the time ran on a big screen.

Muppets on Location opened on September 16. This allowed guests to meet the Muppets while Electric Mayhem played music.

Across the park, the Soundstage Restaurant underwent its first major theme change to coincide with Beauty and the Beast. The Theater of the Stars saw Hollywood’s Pretty Woman open on September 24 only to close November 3rd. This short-lived show featured Roger Rabbit attempting to recruit other Disney characters to Maroon Studios.

The show was quickly replaced with Beauty and the Beast – Live on Stage on November 22, the day the film was released in theaters. The show was much the same as it is today, a short retelling of the film focusing mainly on the musical numbers. However, the order of songs was different. Oh, and there were bats…

The show opened with Be Our Guest rather than all the songs being in order.

Port Orleans opened on  May 17, but only the section that we know today as the French Quarter. 432 rooms were available opening day, though it reached its full 1008 rooms soon after. The resort featured the Doubloon Lagoon pool, and guests could dine at Bonfamille’s Café table-service restaurant or Sassagoula Floatworks and Food Factory food court. The resort featured a gift shop as well, Jackson Square Gifts and Desires.

The first Disney Vacation Club resort opened on December 20, 1991. Then called the Vacation Club Resort, we now know it as Old Key West.  The accommodations include kitchen facilities and a laundry room. The rooms are designed in a Key West, Florida, theme. Olivia’s Cafe restaurant and the Conch Flats General Store opened along with the resort.

Over at the Contemporary, the new convention center opened, making its Fantasia ballroom the largest on property. The lobby and port cochere were altered as part of this expansion.

1991 was a landmark year as it was the 20th anniversary of the Vacation Kingdom of the World. A late arrival in 1992, however, would make a big splash.