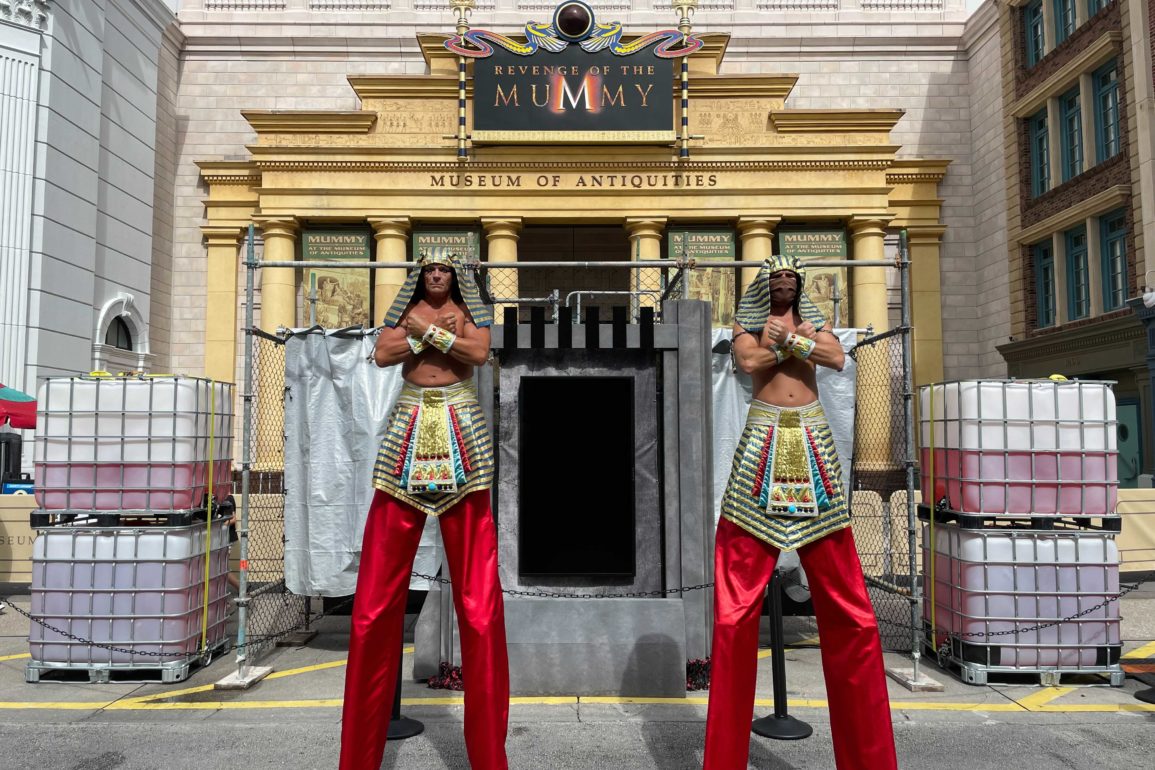 We are three weeks away from the start of Halloween Horror Nights 30 Years 30 Fears. While we still have to wait to experience all of the thrills of the haunted houses, we are able to get some sneak peeks of the event’s scare zones as they are constructed throughout Universal Studios Florida.

Outside of Revenge of the Mummy, the stilt-performers seemed to be guarding elements of the Seek & Destroy scare zone.

This structure has a screen mounted on the front of it.

Ominous eyes stare down at us from banners on this stage.

In the Hollywood area, a new structure is taking place at Lights Camera Hacktion: Eddie’s Revenge.

Right now, this is just scaffolding wrapped in black tarps, so we’re curious to see what final form it will take.

Another mini stage has been themed to Treaks and Foons, a scare zone that debuted in 2002.

Another stage has ominous open gates leading to what looks like a tomb.

Another backdrop says “Invasion!” next to a flying saucer. Invasion was a fan-favorite scare zone from Halloween Horror Nights 27.

A car front has been added to the Vamp ’55 stage. The mini-stages are “film sets” for Eddie Schmidt’s horror film. Each set features a scare zone from Horror Nights past.

Next to the lagoon, Gorewood Forest is coming together.

Giant horns emerge from bloody holes on this stage structure.

A new gear wheel has been added to the stage.

Large wooden poles have been erected, possibly to hold a sign later on.

In the Crypt TV Scare Zone, we’re keeping a close eye on this mysterious bathroom and the socked feet emerging from beneath that tarp.

Today we noticed what seems to be bloody writing on the mirror, hidden beneath burlap.

It appears to read, “If you yourself cannot release, then it will come to take a piece.” This poem references The Look-See, a monster from the series of the same name.

Another trap is covering something on this spider structure from “Itsy Bitsy Spiders.”

Next
PHOTOS: More Halloween Merchandise Creeps Into the Magic Kingdom