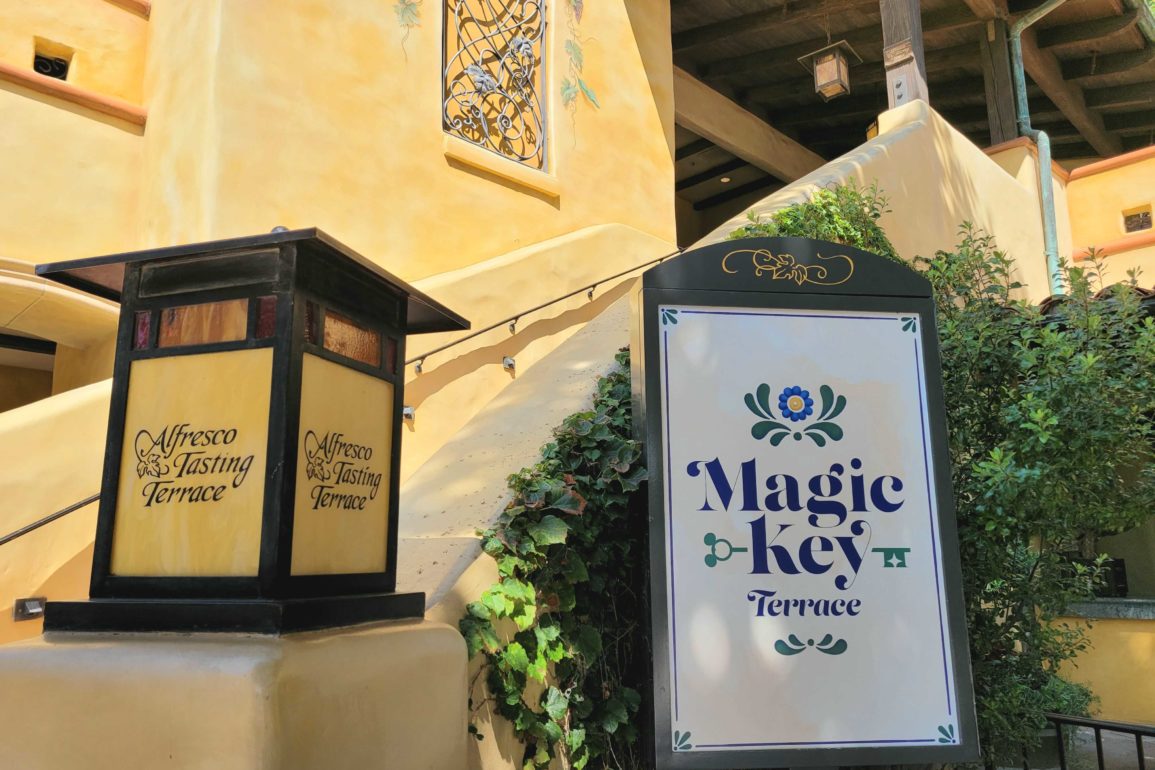 The Alfresco Tasting Terrace in Disney California Adventure has reopened as the Magic Key Terrace, exclusively for Magic Key Holders. The attraction themed menu is identical to the one available earlier this year, so let’s take a look back at some of these fun plates and drinks.

Overall, the food was good, but we don’t think there is anything kids would like.

Named for the former Condor Flats land that was home to Soarin’ Over California and Taste Pilot’s Grill. The duck was tender, and the sauce tasted like a balsamic reduction.

The goat cheese didn’t add much, and if you don’t like goat cheese, it’s easy to pick off. The arugula gave some freshness and crunch to the grapes and fig jam.

Overall, it wasn’t a life-changing dish, but it was fresh and tasty.

Chef’s Selection of Cheeses and Meats

Named for the now-gone Bountiful Valley Farm land, this was phenomenal. It has a nice selection of cheese for every palate, including blue cheese and brie.

The meats (salami and dried aged beef) were great, and they brought us more crostini to try everything. We highly recommend this.

Named for California Screamin’, this is a great choice if you’re vegetarian. It comes with tortilla chips and a spicy sauce on the side. They warned us not to mix in the sauce right away and to do it slowly. We put a tiny bit, and it was way too much spice for us, especially mixed in with jalapeño.

That being said, it was a refreshing dish with the fresh avocado, even though we probably wouldn’t get it again.

These were okay, but again, there is a spicy sauce. This tomato sauce with heat may be enjoyable for those who like spice, but we found it to be too much.

The meatballs were tender and juicy. The broccolini was super charred and had a weird smell. A bit steep for $16, but if you really like meatballs and a bit of spice, it’s worth a shot.

Named after the Burger Invasion on Paradise Pier, this sure ain’t McDonald’s. These were excellent. The beef tenderloin was high quality and cooked a nice medium rare, so it wasn’t tough at all. It reminded us of the sliders from the “Cluck-A-Doodle-Moo” booth at the festivals.

The chimichurri sauce and pickled red onions added a nice touch of acidity to the meat. The bun was tender and didn’t overwhelm the sandwich with bread. We would get these again for sure.

Named for the former Orange Stinger, this drink has a kick (thus, the sting). It’s spicy but still drinkable, with a strong orange aftertaste. If you don’t like spicy or jalapeño flavors, skip it.

There is a bit of a sugary syrup texture from the orange-habanero syrup. The aftertaste is nice. The more we drink, the more we like it.

This martini is named after the The Twilight Zone Tower of Terror.

The included cherry mix can be “dropped” into the drink to turn it a sweet red.

This was good. It’s gin-based, but doesn’t taste too much of gin, which can be strong to the point of being off-putting.

Cast Members suggested we mix in the cherry drop and let it sit for a bit, which we did. It was fun to pour it and swirl it around.

It made for a refreshing drink with a slight cherry aftertaste.

This drink is named for the launch sequence on California Screamin’, and it’s delicious. It tastes like being on a beach in Mexico, if that makes sense.

It’s a bit sweet but won’t wreck you for the rest of the day. There’s a kick of coconut from the pineapple-coconut cream that we would suggest mixing in. Otherwise, it’s a nice combination of tropical fruits and a hint of coconut. It’s very drinkable for those who don’t like something overly boozy.

Of all the locations that used to exist at DCA, it’s astonishing the Pizza Oom Mow Mow was used for a drink theme. This Bloody Mary is exactly as it’s described. We’re not Bloody Mary fans, but this is drinkable.

It’s not too boozy or too spicy. The toppings are fun, and the tiny slice of pizza was actually good. It had a crispy crust and wasn’t soggy, for a solid tiny slice of cheese pizza.

This watermelon drink is a nod to Heimlich’s Chew Chew Train.

The watermelon is cut to look like it’s already been chewed on.

It’s a giant sugar bomb geared towards kids. We couldn’t taste the apple syrup. It tastes like sugary watermelon water.

In review, the Alfresco Tasting Terrace has some hits and some misses, but the fun themed offerings are worth a visit for nourishment, refreshment, and a very cute photo.