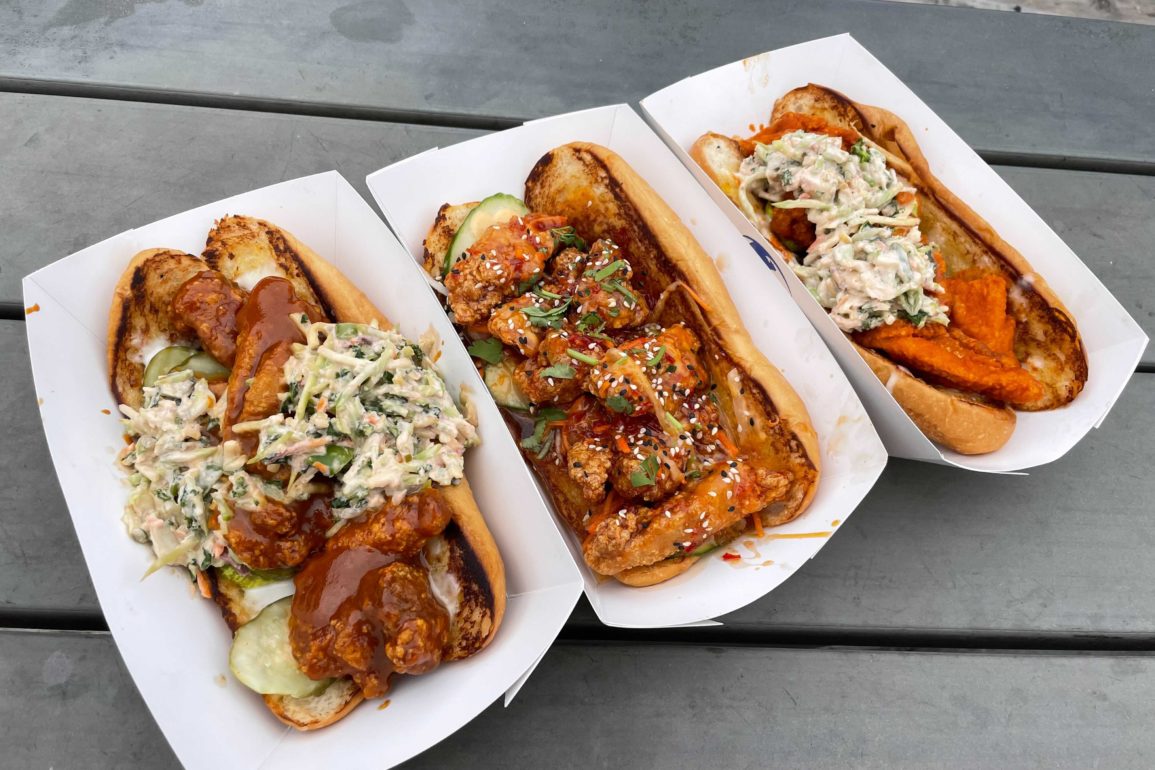 Two of the Halloween Horror Nights food trucks in Universal Studios Florida have unexpectedly opened early, so we switched up our lunch plans to give them a try.

One truck is next to Chez Alcatraz in the San Francisco area of the park.

It serves three different types of chicken sandwiches: Buffalo Hot, Banh-Mi, and BBQ. There are also some beverage options.

In general, all these sandwiches are great. They’re served on the same amazing soft roll as the tripleta from the summer food festival. The sandwiches are massive, with huge chicken tenders. There were about five or six chunks of chicken in each sandwich, so they make for a filling meal.

Based on looks and smell, we expected the Banh-mi to be our favorite. It was good, but unfortunately, drowning in the sweet Thai chili sauce.

If it wasn’t so soggy, it might have been our favorite, but the sauce ruined the bread.

That said, the sauce does have a nice sweet and spicy kick to it. The cucumbers and carrots in the Asian slaw are excellent.

We would order it again, but ask them to go light on the sauce.

This sandwich was awesome. It was sauced perfectly, with each tender well coated.

The sauce is perfect for someone who likes spicy food.

It’s not too overwhelming because the chicken is the only thing sauced. The plentiful serving of slaw and pickles helped cut the heat.

The dill pickles and garlic mayonnaise stood out and brought the whole sandwich together.

The bread stayed fluffy on the outside and slightly grilled on the inside.

You can’t go wrong with this order.

The BBQ, surprisingly, was the winner here. The flavor was sweet and mild.

The slaw was crunchy and cool.

The garlic mayo and pickles paired with it perfectly.

This one has more sauce than the Buffalo Hot, but it’s not drowning in it like the Banh-mi.

These three sandwiches filled us up, but we can’t stop eating the rolls, so you might just see us still chewing on them in San Francisco. These will make great options during your Halloween Horror Nights visit.

The Chicken Sandwich food truck is located in San Francisco near Chez Alcatraz, as indicated by the orange star on the map below.

Next
‘The Lion King: Rhythms of the Pride Lands’ to Return to Disneyland Paris on October 23