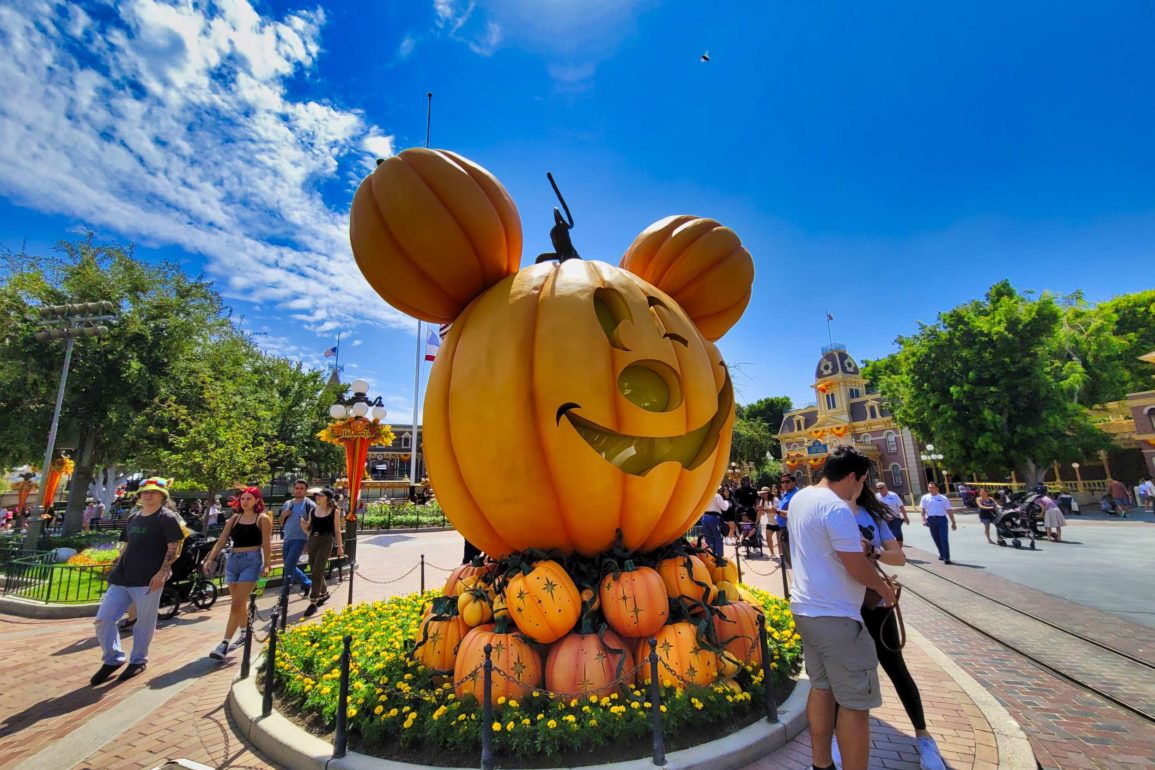 Hey there, hi there, ho there! Welcome to another beautiful day at the Disneyland Resort. We park hopped from Disney California Adventure to Disneyland today, and we want you to come along for the ride.

We found some really cute animated window displays along Buena Vista Street featuring spooky scenes of Mickey in various scenes from the 1929 short, “The Haunted House.”

With Halloween fast approaching, we are finding more and more festive merchandise all the time. These Mickey pumpkin additions, along with some new Nightmare Before Christmas merchandise, are the most recently released.

There’s also some new Haunted Mansion apparel, for both kids and adults. We found these pieces in Elias & Co., but they’re available resort-wide.

Over in Cars Land, Radiator Springs continues to gear up for Haul-o-Ween with decorations all over. Flo’s V8 Café has added some oil can pumpkins to the entrance behind the spider car.

Luigi’s Casa Della Tires has transformed their leaning tower of tires into a festive decoration with fall-colored lights running to the building.

The Cozy Cones have been outfitted as giant Jack-CONE-lanterns, each one with a different face.

And we found a cute little Pixar Easter Egg in the office of the Cozy Cone Motel that we’ve never noticed before.

Buzz Lightyear is hiding in among the cones.

As we head out of Cars Land, Grizzly Peak can just barely be seen towering over the trees.

At the Backlot Premiere Shop, we found some cool new Marvel merchandise like this Funko Loungefly backpack featuring The Avengers.

With the release of Shang-Chi and the Ten Rings just days away, there was plenty of new Shang-Chi merchandise to be found. This is Morris, a six-legged, winged, furry animal without a face.

Morris is also available on a phone case at the maDe kiosks nearby. There’s a ton more Shang-Chi merchandise, and you can see it all right here.

While making our way around Paradise Bay, we spotted an Oogie Boogie shirt that we hadn’t seen in any other stores.

After all that walking in the warm California sun, we decided to stop in for some ice cream at Ghirardelli Soda Fountain. We tried the Magical Sundae, seen above, and the Ocean Beach Sundae, seen below. You can read our full reviews of both sundaes right here.

Big Al waves goodbye to us as we head over to the other park. But first, a quick stop off at

We spotted the first of the Halloween decorations going in near the fountain. These will likely take over the whole district by this Friday, when the Halloween season officially commences.

In World of Disney, we found a couple of Loungefly crossbody bags honoring the characters from “The Nightmare Before Christmas.”

And we found this adorable Mickey card wallet in World of Disney, as well as a new Minnie one.

These Bauble Bar Minnie ears from World of Disney are pearlescent and perfectly pink. A perfect compliment to…

Also in The Disney Dress Shop, we found the Princess loungewear collection that debuted at Walt Disney World a few weeks ago.

Ok, time for the main event. This is what we’ve all been waiting for. Halloweentime at Disneyland really begins when this guy arrives. The giant Mickey pumpkin has returned to Main Street, U.S.A., for the season, and we couldn’t be more excited.

Up at the Hub, the Partners statue is surrounded by Jack-o-lanterns representing characters from each land of the park. You can see them all side-by-side below.

Even the baddies are happy that Halloween is back. Cruella deVil was out on the Main Street Train Station and only too happy to show off her “good” side.

This Harveys bag was found at the Fortuosity Shop on Main Street, but they are usually available only at The Dress Shop in Downtown Disney District.

Down in New Orleans Square, some walls and scrim have gone up near the dock for the Rafts to Tom Sawyer Island.

The pathway is blocked off, and traffic is being rerouted.

Notably, the Harbour Galley is still open for business.

The Monorail sign has received yet another new paint job. When it was unveiled earlier in the week, it was pinkish purple, and now it has been darkened to a royal purple.

There’s nothing new here, but it’s nice every once in a while to notice the smaller details that we so often take for granted, like this iridescent paint that changes color when the sun catches it just right. It’s so beautiful. If we only run from one place to the next to hit rides and grab merchandise, we miss a lot of the beauty that makes this place magical.

Okay, back at it. These new “toothpick holders” from Droid Depot in Star Wars: Galaxy’s Edge feature some of the biggest droid manufacturing companies. And, of course, you’d only ever use these small glasses to keep your toothpicks in, right?

A pair of new hats at Droid Depot feel very futuristic, despite being from “a long, long time ago in a galaxy far, far away.” A rechargeable light-up astromech droid hat and a light-reflective Droid Depot ballcap are just unique enough to justify their hefty price tags.

That’s it for us here at the Disneyland Resort. We’ll see ya real soon!