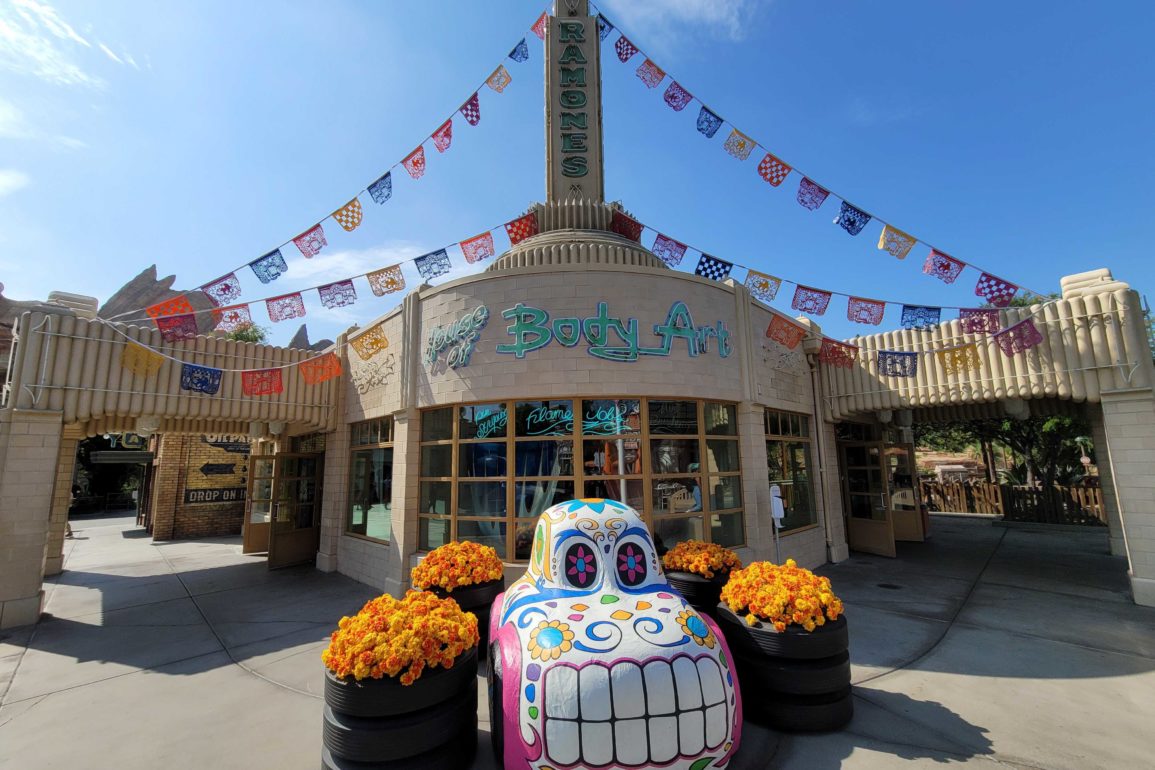 “Haul-o-ween” is taking over Cars Land at Disney California Adventure. Plenty of decorations went up this weekend—and we took a tour through them at night—but even more have been added since.

We already saw the signature scary faces grinning down from from the telephone wire.

You might notice some black cone witch hats atop a few poles.

This is complete with a “graveyard” of homemade road signs.

We spotted this ghost springing up amongst the flowers.

Sarge’s garden has been overrun.

More decorations have also been put up outside Flo’s V8 Cafe.

This includes a freaky-looking spider car.

These are in front of the planters on either side of the front door.

The silhouette of a witch car flies across the shop’s main sign. Other signs advertise “tarot cars”, “shrunken hoods,” and more.

In front of the shop, we saw this skull and crossbones on a barrel.

This car has apparently had an unfortunate accident.

This billboard reminds you to “get your hex on route 66.”

Ramone’s body shop is dressed up for Día de Muertos (Day of the Dead).

The display includes a car outside painted like a sugar skull and surrounded by the traditional marigolds.

Car-themed papel picado is hung from the body shop’s roof.

Orange stripes have been added to the leaning tower of tires outside Luigi’s Casa Della Tires.

This “Honkin’ Haul-O-Ween” sign features Luigi and Guido as Dr. Frankenstein and his assistant Igor.

More spiders can be found in window displays throughout the land.

Spiders are made from distributor caps and spark plug wires.

Over at the Cozy Cone, all of the cones have different spooky faces.

The main building is lined with orange cone garland.

Finally, this building has posters advertising classic Halloween movies with a car-themed twist.

Here we have “Blackout on Route 66” and “Hocus Spokus.”

What’s your favorite Haul-o-ween decoration? Let us know in the comments.

Entrance of Tarzan's Treehouse Almost Completely Demolished for New Theme at DisneylandMay 21, 2022
'We Don't Talk About Bruno' to be Performed Live at Oscars on March 27March 16, 2022
Disney's Typhoon Lagoon Closing February 9 and 10 Due to Cold WeatherFebruary 8, 2022