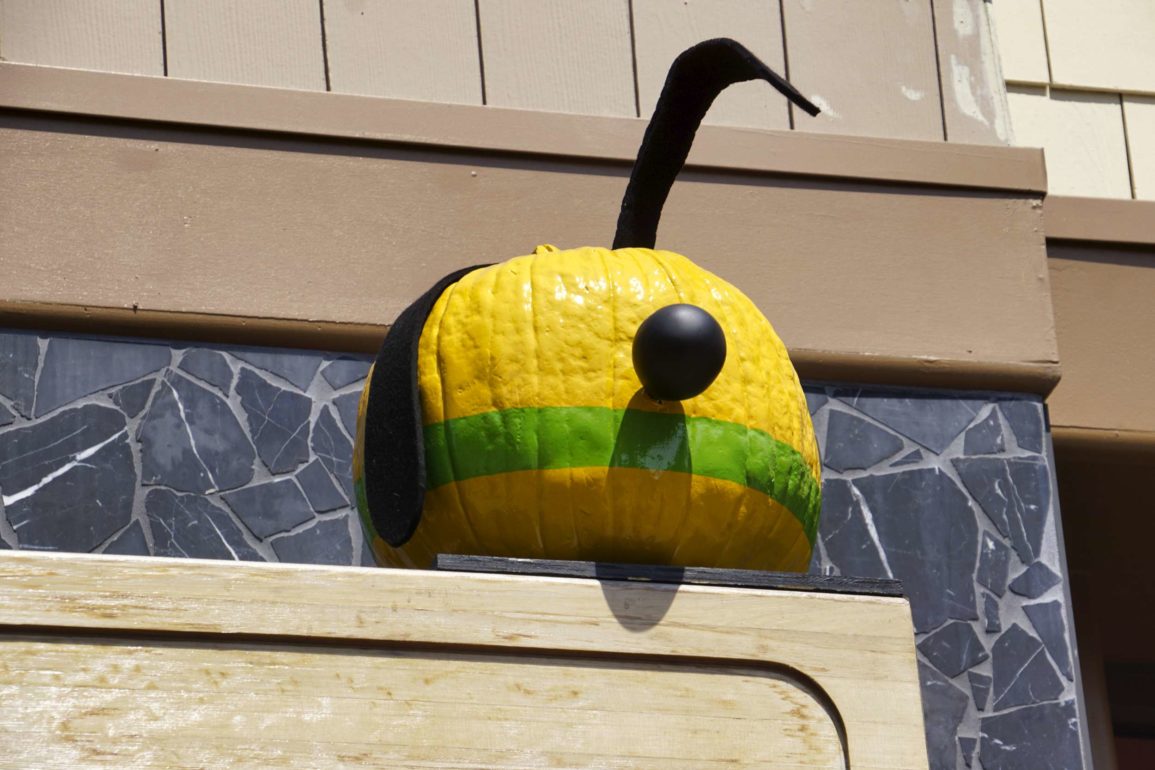 In this brand-new scavenger hunt, guests will need to purchase a game board (limit five per guest) and stickers at World of Disney, Pin Traders, Disney Home, The Disney Dress Shop, or WonderGround Gallery. The game boards retail for $9.99 each. Then, they’ll explore Downtown Disney District looking for pumpkins so they can place the corresponding stickers in the correct spot on the map.

We found a few of the character pumpkins ourselves while visiting Downtown Disney District. (Spoilers ahead!)

If you buy your game board at Pin Traders, don’t wander too far. Look up, and you’ll spot your first pumpkin.

A Pinocchio pumpkin is sitting next to the Pin Trading sign.

Daisy Duck’s pumpkin can be found sticking off of the roof of the Disneyland Monorail station.

Here’s the eponymous Pluto pumpkin, complete with one ear sticking up, at Salt & Straw.

How far will you go to look for these pumpkins? Make sure to go to this waterfall to find a Moana-inspired pumpkin.

A polka-dot Minnie pumpkin is sitting on the Disney Home sign.

While it’s hard to see through the glare, the window display of Marceline’s Confectionery is home to Donald Duck’s pumpkin.

Be sure to look up when you stop by Splitsville, or you might miss the pumpkin for San Fransokyo’s biggest hero, Baymax!

Of course, the scavenger hunt wouldn’t be complete without a Mickey pumpkin.

He can be found at World of Disney.

There are a lot of pumpkin decorations that aren’t part of the scavenger hunt. While you’re appreciating them, make sure to look up…

We spotted this Goofy pumpkin in a tree.

The Tiana pumpkin is right at home on the balcony of Ralph Brennan’s Jazz Kitchen.

Pick up some tea at Starbucks, and then search for Disney’s famous teapot, Mrs. Potts.

Over by the fountain near La Brea Bakery, the pumpkins for Lilo & Stitch hang out in a tree.

Keep your eyes peeled at Star Wars Trading Post for a droid-inspired pumpkin.

BB-8 makes for a perfect white and orange pumpkin.

When you’re done playing, return your game board to World of Disney or Pin Traders to get your prize: one of these spooky souvenir cups.

Completed game boards can be brought to Pin Traders or a station outside World of Disney to obtain their prize.

We went with the tumbler featuring Chip and Dale having some fun with Jack-o’-lanterns.

Overall, this was fun. They definitely made it easier by telling you which shops to find them at. It’s a cute activity that a lot of people were doing. The cup is pretty neat, and we can think of worse ways to spend $9.99. Magic Key holders also receive a discount.

One nitpicky thing was that the stickers were a little hard to peel off, but that’s relatively minor. It’s a pretty affordable activity that doesn’t require you to enter the theme parks, and one we’d recommend.