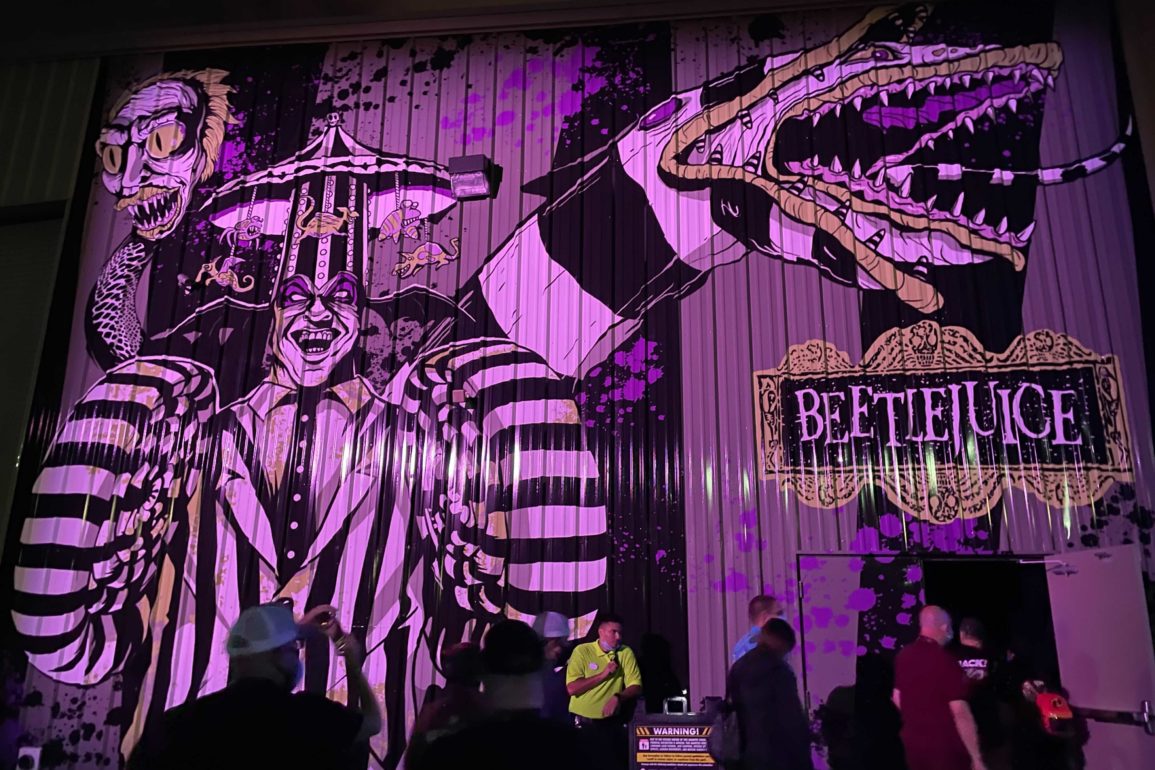 The ghost with the most is back at Halloween Horror Nights! Beetlejuice has been a staple of the event since its debut as Fright Nights in 1991, so it seems fitting to have a house in his honor during the 30th anniversary.

Lucky guests were able to preview this house for two days only last fall.

The façade features artwork of Beetlejuice and the sandworm.

The artwork is very impressive and eerie!

The façade at night is cast with an eerie purple glow.

Beetlejuice himself greeted us as we entered the attraction. Like a macabre carnival barker, he hypes up guests as they enter.

After meeting the star, we walked through a massive black and white spiraled tunnel. HHN fans will recognize the infamous spinning tunnel, often used to disorient guests, making it easier for Scareactors to catch them unaware.

Emerging from the tunnel, we basically entered the movie. The set pieces are amazing recreations of some of the movie’s most memorable scenes. We saw ghoulish creatures waiting for eternity in the waiting room scene. The dinner party scene was also there, complete with monster shrimp cocktail. Yes, “The Banana Boat Song” was blasting!

Lydia is seen in a foggy corner, saying, “I too am strange and unusual.”

Beetlejuice makes multiple appearances in various forms throughout the attraction. We see him as a slithering snake. The rolling arms Beetlejuice from the wedding scene is also here.

Similar to 2019’s Ghostbusters house, the Beetlejuice house showcases amazing set design over screams. We felt as if we were walking through the movie’s story arc, from the first encounter with Beetlejuice, to the wedding scene, to the waiting room, and every spooky part in between.

Fans of the film and character should get to Universal Studios Florida before Beetlejuice returns to the underworld.

The entrance for “Beetlejuice” is in Woody Woodpecker’s KidZone, as indicated by the orange star on the map below.