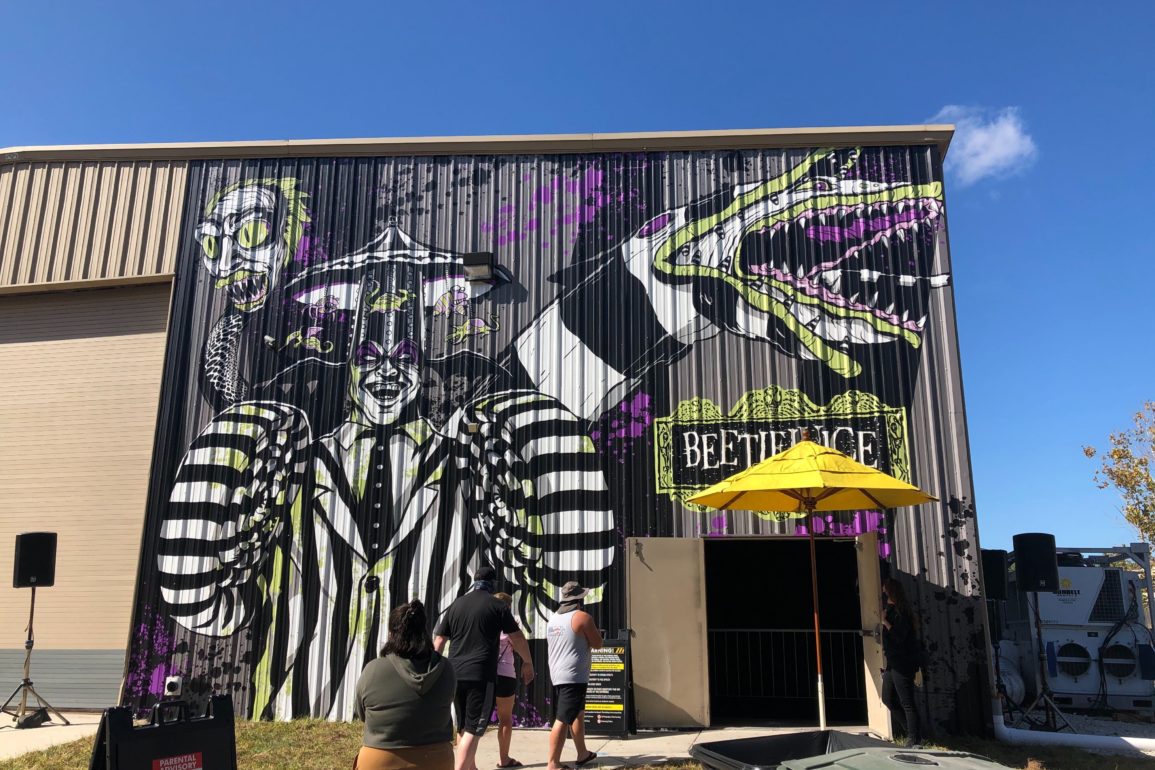 After rumors of a Beetlejuice haunted house swirled, we confirmed that the ghost with the most was indeed coming to Universal Studios Florida on Halloween. We secured a spot in the virtual line this morning to check out the new haunted house experience.

The Beetlejuice haunted house is open from 10 AM until 6 PM. It is operating with a virtual line only.

Like the Revenge of the Tooth Fairy and Universal Monsters: The Bride of Frankenstein Lives houses, the Beetlejuice haunted house sign features numerous warnings. The attraction is not recommended for children under the age of 13.

Guests waiting for their virtual line return times waited near the attraction’s entrance.

The queue follows a backstage street. Social distancing markers have been added to the pavement.

Nearby, we saw Mardi Gras floats under roof. They are temporarily displaced while the Beetlejuice house is in operation. The attraction is housed in a parade storage warehouse.

The entrance features artwork of Beetlejuice and the sandworm. The artwork was added to the building just a few days ago. A temporary public address system has also been set up outside the entrance.

The artwork is very impressive and eerie!

The artwork foreshadows what we will see inside.

The dreaded sandworm towers over the entrance.

Beetlejuice himself greeted us as we entered the attraction. He was on an elevated facade, wearing a face covering for safety. Like a macabre carnival barker, he hypes up guests as they enter.

After meeting the star, we walked through a massive black and white spiraled tunnel. The tunnel is similar to what is used at Poseidon’s Fury, replacing water with spooky Beetlejuice designs.

Emerging from the tunnel, we basically entered the movie. The set pieces are amazing recreations of some of the movie’s most memorable scenes. We saw ghoulish creatures waiting for eternity in the waiting room scene. The dinner party scene was also there, complete with monster shrimp cocktail. Yes, “The Banana Boat Song” was blasting! It looked like the dining room set was built for additional performers to dance along, but those performers were absent.

Once inside, like Revenge of the Tooth Fairy and Bride of Frankenstein Lives, the Beetlejuice house uses plexiglass to keep performers separated from guests.

Lydia is seen in a foggy corner, saying “I too am strange and unusual.”

Beetlejuice makes multiple appearances in various forms throughout the attraction. We see him as a slithering snake. The rolling arms Beetlejuice from the wedding scene is also here, but seemingly deactivated—again, opening a house during a pandemic means that a lot of effects suffer.

Similar to last year’s Ghostbusters house, the Beetlejuice house showcases amazing set design over screams. We felt as if we were walking through the movie’s story arc, from the first encounter with Beetlejuice, to the wedding scene, to the waiting room, and every spooky part in between.

Fans of the film and character should get to Universal Studios Florida before Beetlejuice returns to the underworld. The house will be open today and tomorrow until 6:00 PM.

Are you planning to check out the latest Universal Orlando Resort haunted house? Which is your favorite? Use the comment feature to share your thoughts.