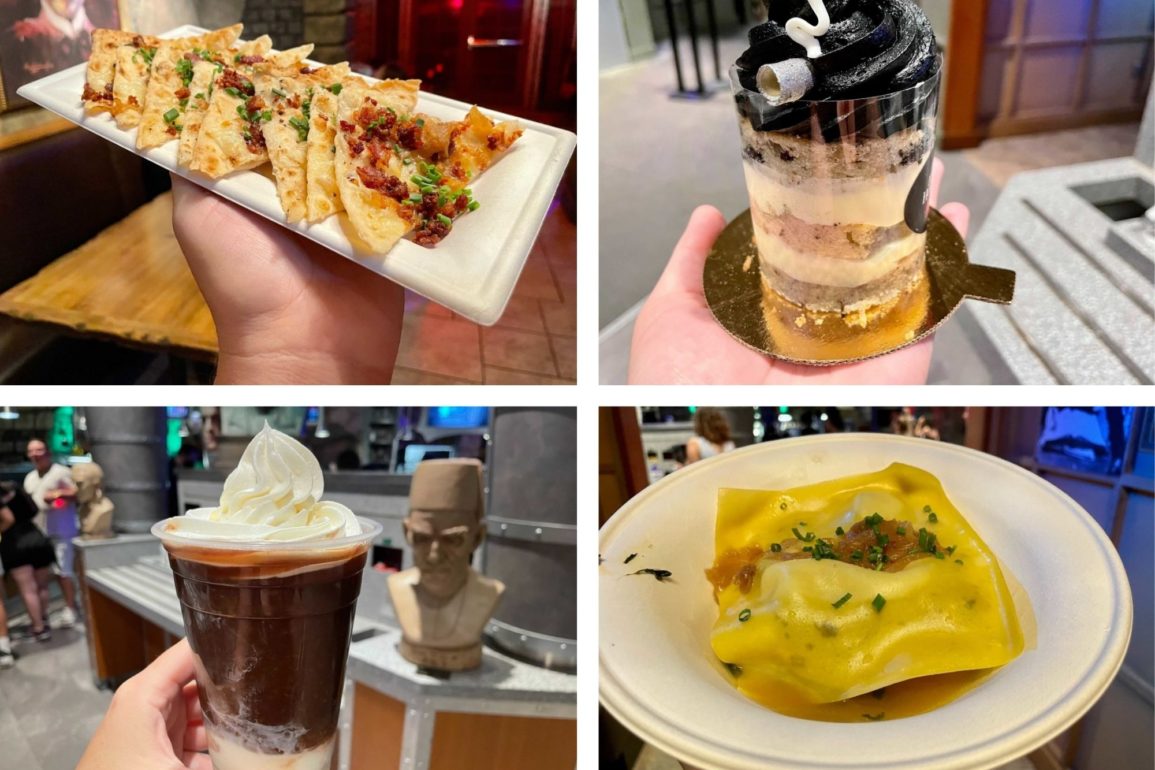 Though Universal Studios’ Classic Monsters Cafe Scareactor Dining isn’t available this year, the restaurant is still offering a specialty menu during the event.

This was the best of all the dishes at Classic Monsters Cafe. The Swiss cheese and bacon had powerful flavors, and the creamy sauce complemented them perfectly.  We enjoyed it even though it was cold by the time we ate. The Swiss cheese is the headliner here; it ties everything together. We recommend this.

German lasagna filled with Beyond meat, spinach, and mushrooms, served in vegetable broth with caramelized onions and chives

The mix of Beyond meat and vegetable broth was a nice change from some of the heavier dishes here. The pasta was cooked perfectly, though it’s not a traditional Maultaschen. The price point is great, as this is a very filling dish. It would be even better on a cooler evening.

This potato dish should have known better than to come to an event famous for Twisted Taters. The potato pancake wasn’t bad, but we didn’t like the apple sauce, and the sour cream had a strong taste we didn’t care for. Skip this and get yourself a classic Twisted Tater instead.

The black sesame seed and vanilla ice cream go well together. The consistency is a little different than the soft serve you’ll find around the parks. The vanilla flavor was excellent, nice and rich, and not too creamy or heavy. It’s an interesting combination of flavors and worth trying. We would get it again.

This was really good, perfect for fans of Oreo desserts. We loved the cake and buttercream frosting. It’s simple, and the flavor palette is basic, but the execution is great. Plus, the presentation is excellent. It’s very photogenic. We would get this again.

This drink was so awful and so different than the description; we hope it was just made incorrectly. This was more like raspberry iced tea than a cold brew. The artificial raspberry was sickly sweet to where it even overpowered the whipped cream.

It was supposed to have the Frankenstein swirl ice cream at the bottom, but ours only had vanilla. We were glad of that, however, because the black sesame would have just added another layer of flavor confusion. This monster should never have left Dr. Frankenstein’s lab.

Believe it or not, the beer float was worse than the Monochrome Monster. It was basically beer, ice cream, and whipped cream. The peanut butter chocolate notes to the stout were lost. If you like heavy beer and dairy together, go for it, but it made us feel sick after just one sip.

Universal Studios’ Classic Monsters Café can be found across from the Universal Music Plaza, as indicated by the star on the map above.