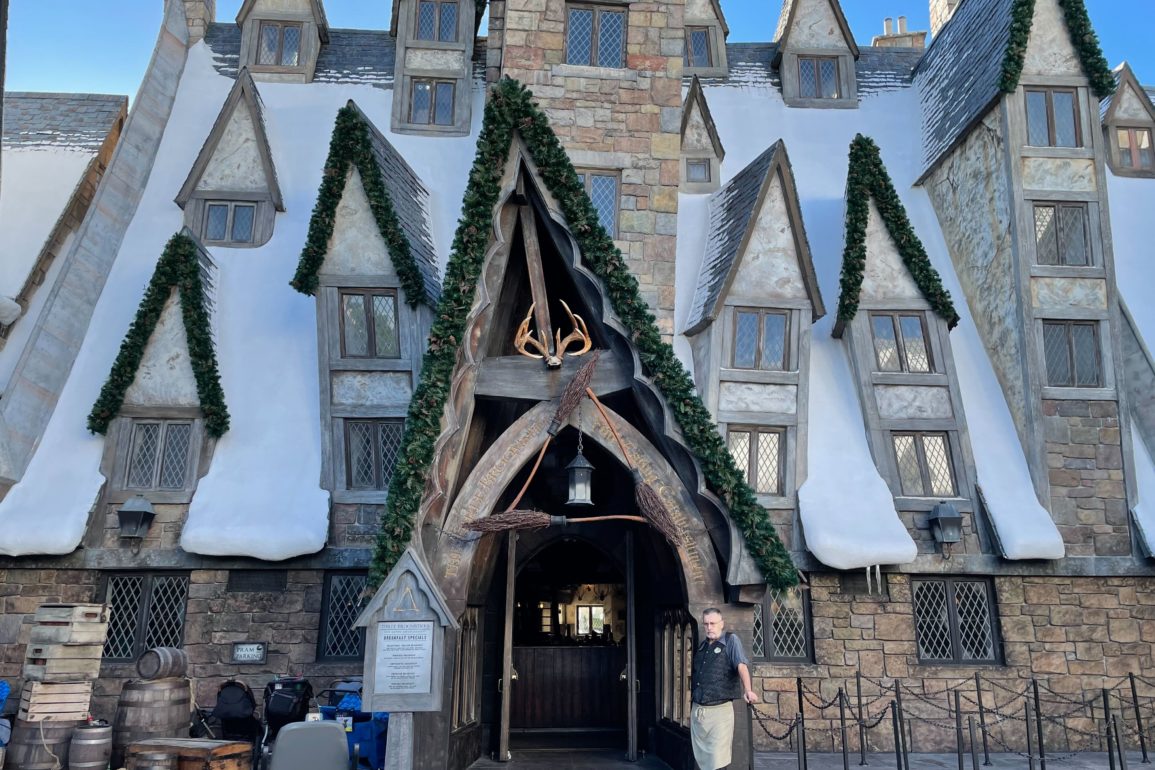 Universal Orlando Resort has quietly begun getting its theme parks ready for the holidays. Just days after we reported that the first decorations were being installed at Universal’s Islands of Adventure, The Wizarding World of Harry Potter – Hogsmeade is now looking even more festive.

Since our last visit, long garlands have been installed at the entrance to Three Broomsticks.

Meanwhile, the decorations at Honeydukes are now lit up, though it may be hard to see during the daytime.

Thanks to its covered exterior, the lights are much clearer to see outside Dervish and Banges.

Elsewhere in Hogsmeade, the façade of Gladrags Wizardware has garlands enhanced with cornflower blue thistles and berries.

More garlands have popped up along some of the building facades, including the entrance to the restrooms.

Many of the buildings have themed decor. Appropriately, the exterior of Dogweed & Deathcap has plenty of what appears to be holly and red berries.

Quidditch fans are sure to like the decorations outside Spintwitches, where the garlands have baubles meant to resemble the Golden Snitch.

Bespoke Wizard Bookshop has an elegant wreath with yellow leaves that resemble quills, perfect for avid readers and writers.

The entrance to Hogsmeade from Jurassic Park has received similar garlands as those seen at the entrance from The Lost Continenent.

Even the Butterbeer cart is getting in on the holiday fun!

Other small touches can be found around Hogsmeade, such as these simple wreaths and decorated trees.

Finally, Ollivanders has small garlands that match those on the other end of Dervish and Banges.

All in all, it’s beginning to look like a very happy holiday season in Hogsmeade!

Next
PHOTOS: 2021 Holiday Merchandise Starts to Arrive at the Disneyland Resort