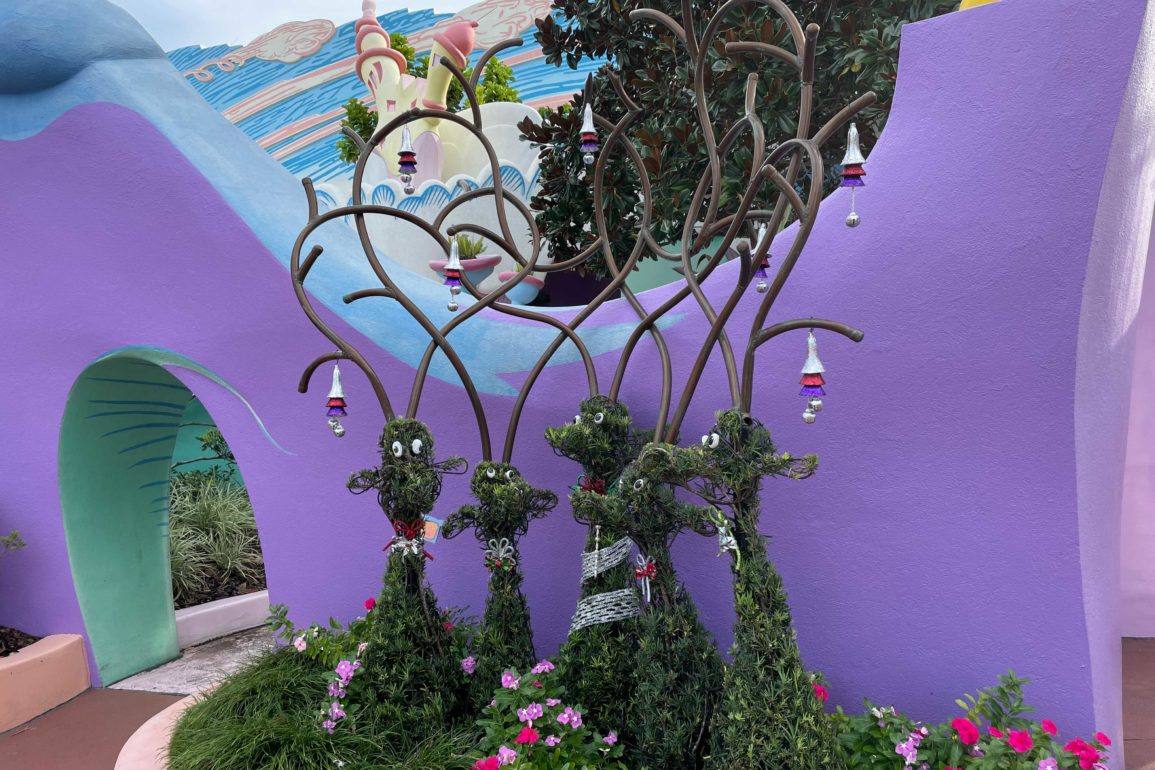 Since our visit yesterday, even more Who-liday decorations have been hung around Seuss Landing in Universal’s Islands of Adventure.

We already saw the garland wrapped around the entrance archway.

There are a few Christmas trees in planters along the walkway.

Poles wrapped in garland and topped with wreaths also line the path.

They have red and green bows on either side of them.

The “If I Ran The Zoo” play area has also been adorned with some garland.

This archway has garland around it and a wreath on top.

Most of the railings and lampposts have garland wrapped around them.

The garland is all decorated with different ornaments and baubles in different shapes, sizes, and colors.

Giant bows have also been placed periodically along the garland.

We love this reindeer topiary.

The deer have giant antlers, with ornament bells hanging from some of them.

Nearby, some Deer Pals are also ready for the holidays with red and white bowties.

The center Deer Pal has a Christmas tree collar and a tiny snowflake top hat.

The garland on this lamppost has blue and white baubles, with a snowflake and blue bow on the wreath on top.

Garland lines the windows of Cats, Hats and Things.

The sign for The Cat in the Hat ride is covered in garland.

This garland has Thing 1 and Thing 2 ornaments hidden in it.

The giant Cat in the Hat hand is wearing a garland bracelet.

This garland and planter have a few faux berries.

There’s tons of garland and some silver tinsel over at The Street of the Lifted Lorax.

The Lorax himself is wearing a giant pink bowtie and carrying a purple striped candy cane.

This garland has pink, blue, and purple baubles.

The iconic Seuss trees are wrapped in silver tinsel with brightly colored baubles and bows.

Not every inch of Seuss Landing is covered in Who-liday decorations yet, but we’re keeping an eye out.

The exterior of The Circus McGurkus Cafe was decorated yesterday.

Sweet Candy Cookers was decorated yesterday, but there is now a garland stretching from it over the walkway.

This garland has decorations hanging from it.

There are red and silver ornaments, including several in the shape of a star.

Garland and a pink bow hang from beneath the tracks of the High in the Sky Seuss Trolley Train Ride.

New garland with bows hangs from beneath the Mulberry Street Store sign.

Garland is also now wrapped around the store’s exterior columns, and red tinsel lines the windows.

Moose Juice, Goose Juice has garland hanging from its roof, along with wreaths and polka-dot bows.

The sleeping geese have their own polka-dot bowties.

Finally, there is garland hung all over Hop on Pop Ice Cream Shop.

Have you visited Seuss Landing during the Who-lidays? Let us know in the comments.