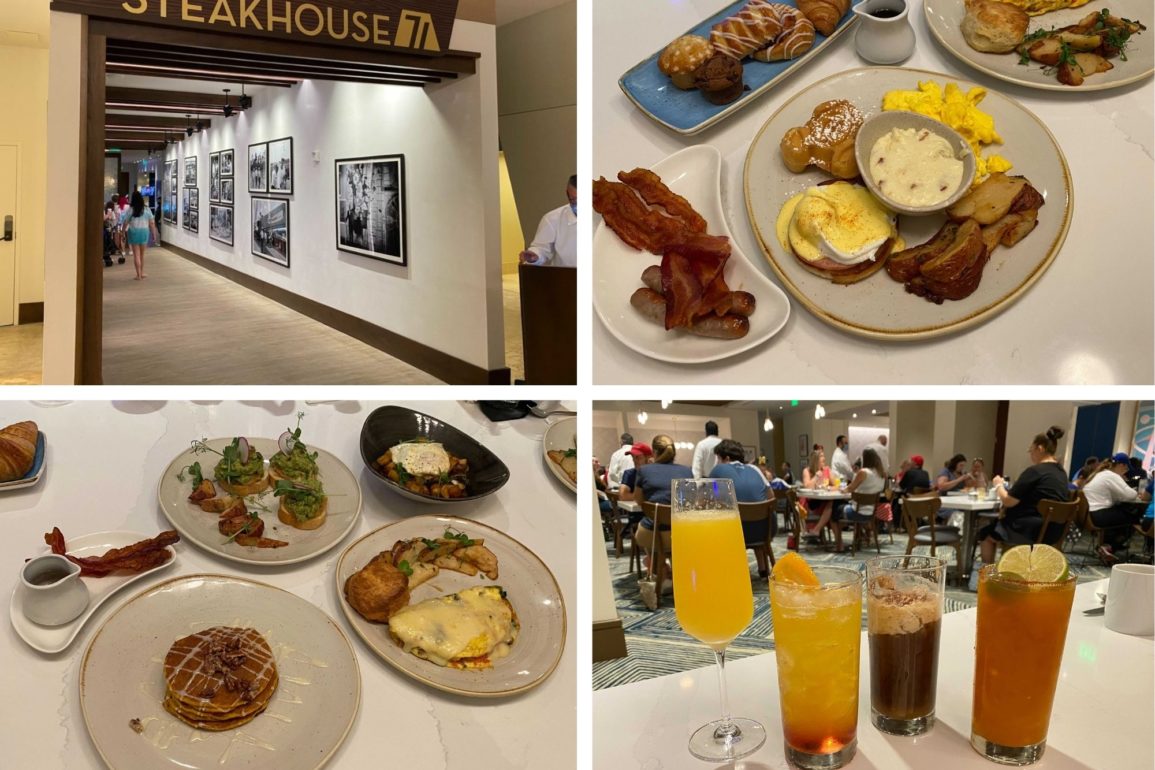 REVIEW: Breakfast at Steakhouse 71 Brings Back the Classics in Disney’s Contemporary Resort

Disney’s Contemporary Resort opened on October 1, 1971, alongside the Magic Kingdom, and we’re celebrating the 50th anniversary with breakfast from the new Steakhouse 71 inside the hotel.

The former site of The Wave… of American Flavors has been renovated to match the new look for the lobby.

Classic art of the Magic Kingdom is featured.

For a full tour of the new restaurant, check out our post here.

The assorted pastries were a cinnamon roll, a chocolate muffin, a cheese danish, a croissant, and a lemon poppy seed muffin.

The chocolate muffin was dry and the flavor lacking, despite being filled with chocolate chips. Our favorite was the light and fluffy lemon poppy seed muffin. It had a strong lemon flavor.

The cinnamon roll was okay, just the same roll you find across property, just like the croissant. The cheese danish was very sweet but with a great soft texture.

The prime rib was dry, but adding some of the egg yolk in helped. This dish had a good overall flavor. The egg is runny and cooked well. However, it was nothing to write home about.

Seasonally-inspired Pancakes with a choice of Bacon, Pork Sausage, or Chicken Sausage

The seasonal pancakes right now are pumpkin pecan. The pecans on top are nice and the icing and syrup add sweetness. The pumpkin is prominent but not overpowering. The pecan butter is similar to the icing on cinnamon rolls in consistency. We could not taste the espresso in the syrup at all, but it didn’t detract from the dish. It was the perfect fall pancake and we would order this again.

We could taste each veggie in every bite. It was delicious. Great flavor, and the eggs were cooked well. The biscuit, however, was tough. The potatoes with many of the dishes were a little under done and hard in the center. Good seasoning, tasted like they were tossed with some salt and vinegar.

Again, we could taste ham, onion, peppers and cheddar in every bite. The eggs are fluffy and cooked well. You can’t go wrong with either omelette.

The toast had a generous helping of avocado on top. The caramelized onion jam was a little too sweet in our opinion, but the bread was nice and crunchy, and the sunflower seeds added a nice crunch to them. It was a very enjoyable dish.

The bacon-cheddar grits were not grainy but had more of a mashed texture. The taste is good, with strong cheese and bacon flavors detectable.

The poached egg was not runny, but otherwise, it was a good eggs Benedict. It’s traditional style with a poached egg on top of ham and an English muffin. The hollandise sauce is tart and compliments the eggs.

The current character cup features Frozen, and they did not have any of the character clips so we were given a glow cube instead. It comes with lemonade by default but you can select a juice instead.

The cold brew was overwhelmingly sweet with even more sugar added from the vanilla cold foam on top. Bourbon is definitely prominent but too syrupy-sweet for the palate. We wished the coffee was the stronger flavor.

The Tequila Sunrise tasted like just orange juice and grenadine. The grenadine is house-made but there is no tequila detectable anywhere in this.

The refillable mimosa was the winner of the drinks. It’s a standard mimosa, but you can’t go wrong with a breakfast classic. We were glad to see the refillable feature from The Wave return.

Overall, we enjoyed our meal. The food was good even if the drinks were largely mediocre. The remodeled restaurant is nicely done and fits the Contemporary Resort very well. We would come back for breakfast here again.

Next
REVIEW: Hand-Dipped 50th Celebration Mickey Premium Bar is a Great Twist on a Classic Treat at Disney’s Animal Kingdom