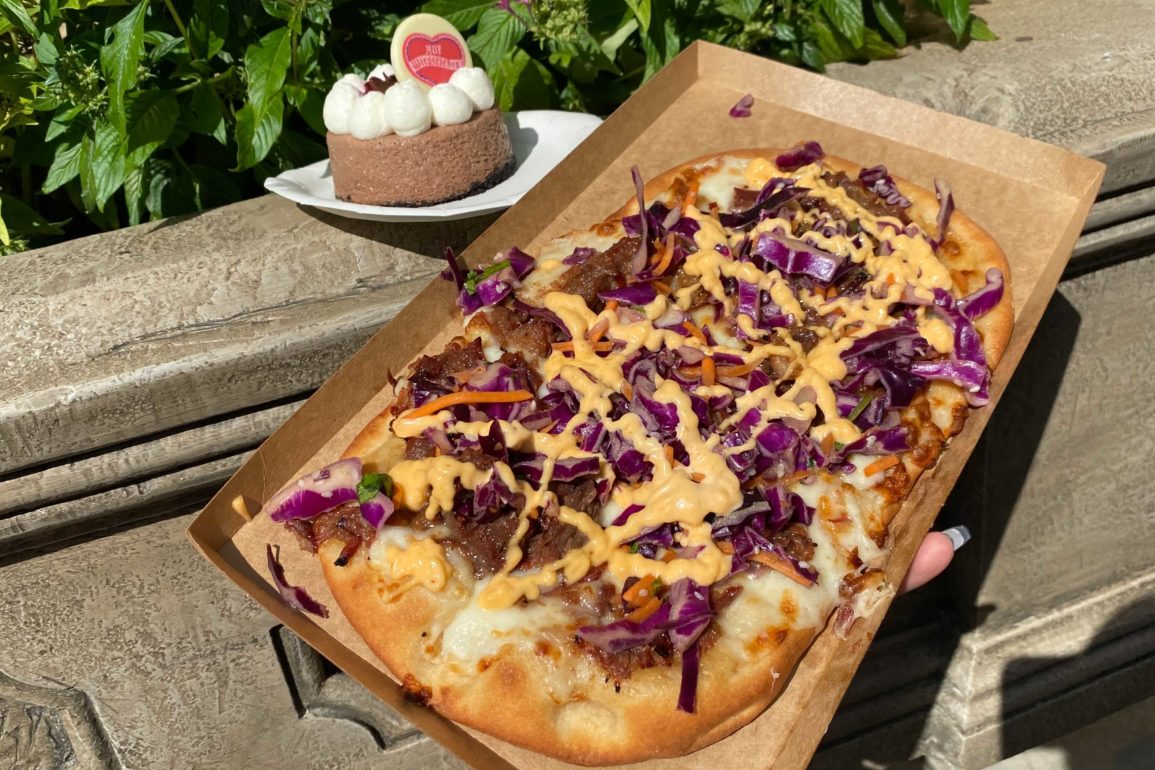 Next up in our mission to review all of the new 50th anniversary food items at Walt Disney World is the black forest chocolate cheesecake and Korean short rib flatbread at Pinocchio Village Haus in Magic Kingdom.

Pinocchio Village Haus also has its own version of the 1971 meal.

Cast Members told us this has been a big favorite since it came out.

We were expecting it to taste more like chocolate mixed with cream cheese, but it is exactly as described. The slightly crunchy Oreo cookie bottom gave it an extra hit of chocolate we enjoyed.

The cherry compote is small and doesn’t add a lot aside from a slight sweetness. More would have been a big help to balance out the dryness of the rest of the dessert.

It’s a decent dessert that we wouldn’t mind getting again.

The short rib is cooked decently considering it’s from a quick-service restaurant. Unfortunately, the flatbread is overwhelmingly salty.

The ginger mayonnaise is okay but we’ve had better. It has a heavy mayo flavor with a kick of spice at the end.

The slaw is crunchy and is a great fresh addition. The crust on the edges is crunchy but slightly soft in the center.

Although this wasn’t a big win for us, it’s not bad and is heavy on the toppings so makes for a filling meal.

The 1971 meal comes with the standard all-meat flatbread they always serve. It’s not our favorite, but it’s generous on the toppings. It could use more sauce and the cheese was a little dry.

Though the menu lists garlic knots, the meal came with the standard breadsticks instead. They taste like store-bought frozen breadsticks. The marinara sauce is slightly watery and doesn’t grab as much as you would hope.

This is the same cake pop available in all versions of the 1971 meal, although this one wasn’t as pretty as the ones we got at Cosmic Ray’s and Casey’s Corner. It’s not a bad cake pop, but the icing melts fast.

Overall, none of the 50th anniversary options at Pinocchio Village Haus are bad, but nothing stood out to us. It was all slightly mediocre. We wouldn’t come back here knowing there are better options elsewhere in the park.