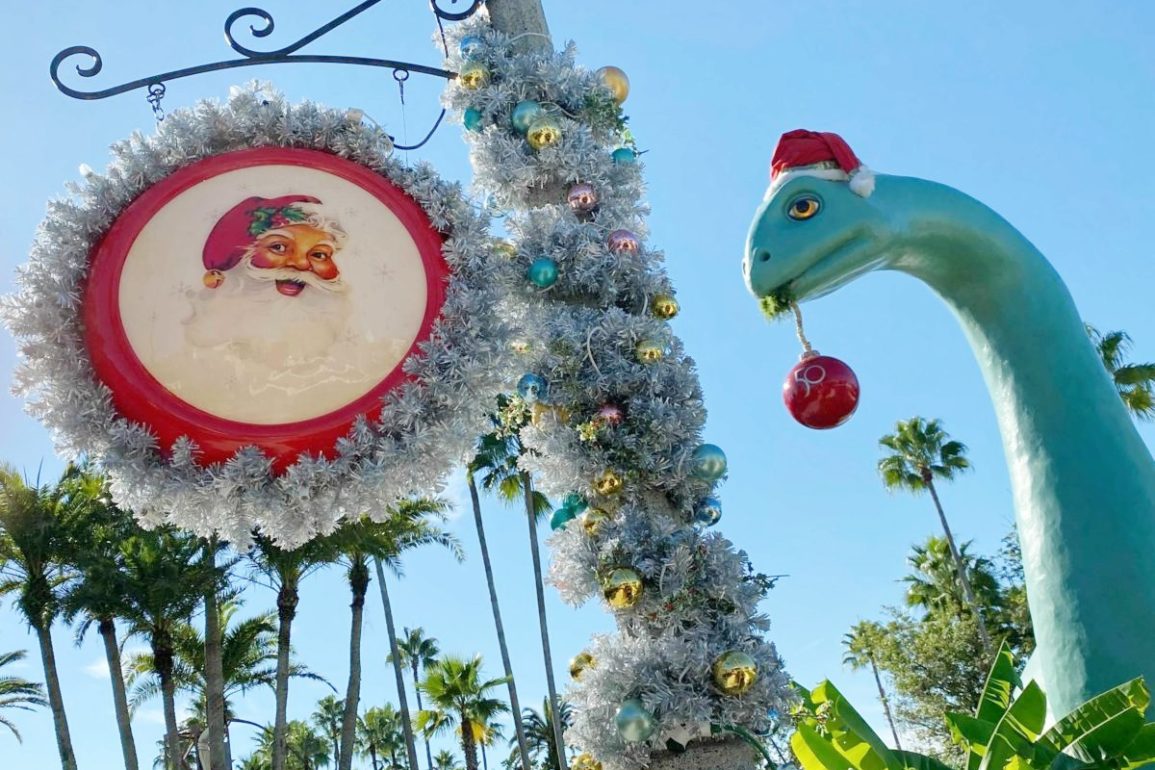 Disney’s Hollywood Studios is getting ready for Christmas with lights, a giant tree, “snoap” machines, and more.

Silver tinsel now adorns the front entrance to the park.

The tinsel is full of colorful ornaments and topped with red bows.

Decorations can be seen in the Crossroads of the World.

Garland lines the roofs of the shops and guest services.

There are colorful wreaths.

Most of the garland and wreaths in Disney’s Hollywood Studios are silver.

This is a green wreath with peacock feathers tucked into it.

Streetlamps near the entrance have entire Christmas trees on them.

The poles outside stroller rental are wrapped in silver garland.

This garland is car-themed, with gas station and road sign ornaments.

Miniature Christmas lights can be seen in plants outside the Theater of the Stars.

The fan-like machines will blow fake snow across Sunset Boulevard.

These lights and machines are near The Twilight Zone Tower of Terror, which will light up for Sunset Seasons Greetings.

Some of the machines are painted green to help them blend in with the plants.

More lights have been installed in rows near the center of the park.

“Snoap” machines can also be seen on top of buildings on Hollywood Boulevard.

Over at Echo Lake, Gertie is ready for Christmas.

She has a Santa hat and is holding a 50th anniversary ornament in her mouth.

Her hat even has a gold bow on one side.

The ornaments were added to the lake a few days ago, but now a giant Christmas tree towers over the water from the island in the center.

The tree is wrapped in gold tinsel and covered in ornaments.

A pile of giant ornaments sits on the island next to it.

A bridge remains across the lake for crew members who were installing the decorations last night.

The ornaments and baubles in the tree include candy canes, Santa’s face, and more.

The tree is topped with a white star.

The streetlamps around the lake are wrapped in silver garland with giant ornament-like decorations installed over the lights.

Ornaments are tucked into the garland.

Green umbrellas around Echo Lake have been transformed into Christmas trees.

They have white garland and flat ornaments on them.

A few deer are frolicking outside 50’s Prime Time Café.

A group of poodles is ready for the holidays near Hollywood & Vine.

The shops and restaurants around Echo Lake have garland wreaths around their windows.

The decorations near the door have more poodles hidden in them.

The wreaths on the second level have snowman in their centers.

There’s a large wreath outside the Tune-in Lounge.

Another wreath hangs in the window of 50’s Prime Time Café.

Even the Indiana Jones Adventure Outpost has wreaths and decorations.