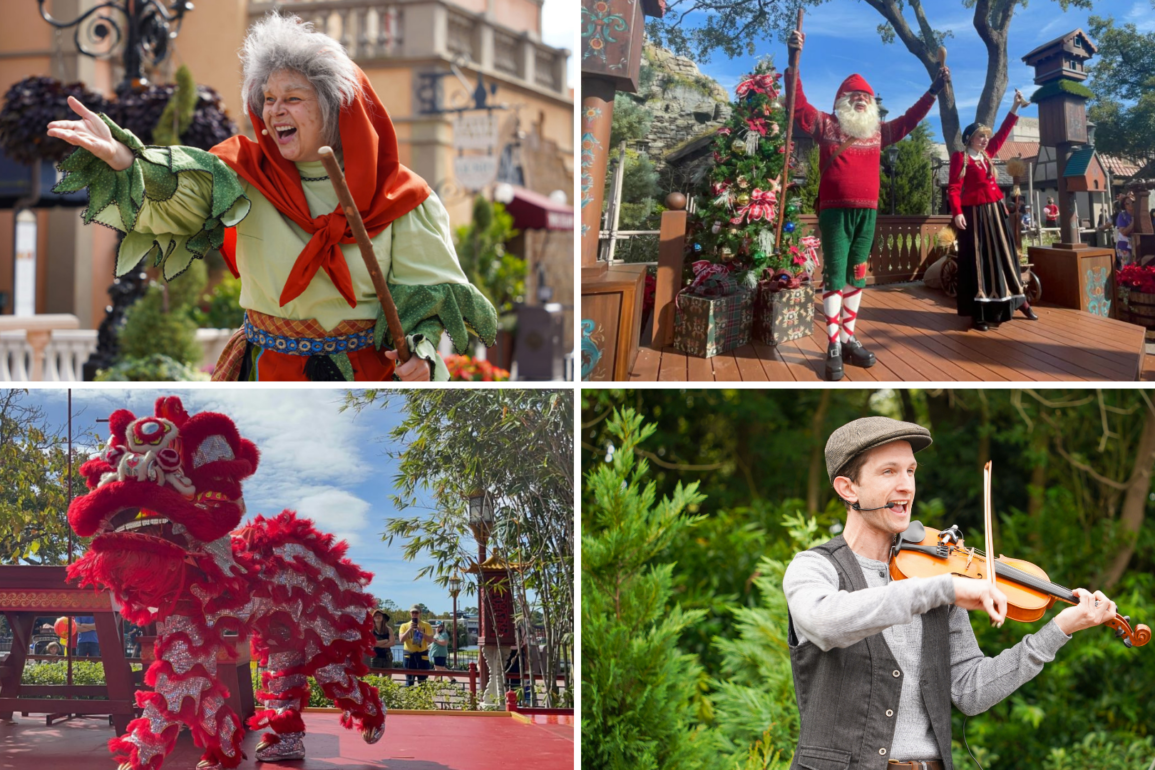 PHOTOS, VIDEO: Storytellers Return for the 2021 EPCOT International Festival of the Holidays

One of the traditions of the EPCOT International Festival of the Holidays is the Storytellers found around World Showcase. Each Storyteller highlights winter holiday traditions and lore from their corresponding country. After their absence at last year’s “Taste of” version of the festival, the festive entertainers have returned.

In the Norway Pavilion, guests can find the “Mischievous Magical Barn Santa” and Sigrid onstage outside the Royal Sommerhaus.

Sigrid sings a traditional Norway Christmas carol while Santa accompanies her on the recorder.

Sigrid explains the folklore behind the nisse or “barn Santa,” although she doesn’t believe they exist.

As she attempts to explain other traditions, the barn Santa causes mischief and interacts with the audience.

Watch the full performance of Sigrid and the barn Santa below.

A narrator at the China Pavilion introduces the Chinese Lion, which is operated by two dancers.

The narrator explains that the lion is said to drive away evil and bring good fortune as the dance begins.

Throughout, the narrator explains other elements of the dance, such as when the lion is eating or when it takes a “cat nap.”

Watch the full dance below.

La Befana appears on the stage in the center of the Italy Pavilion.

She explains that she’s a good witch and her name means gift-giver. She brings gifts to Italian children, much like Santa Claus does in other countries.

In the Japan Pavilion, the storyteller talks about Japanese new year traditions.

She mainly focuses on the Daruma, a good luck doll.

Using her bell and folding fan, she tells the story of the Daruma and new year in Japan.

Watch the Japan storyteller below.

The Hanukkah storyteller is in the new festival area next to the Morocco Pavilion.

Here, the storyteller plays music and tells the history of Hanukkah.

Depending on which Hanukkah storyteller you catch, you might see him play guitar or violin.

Watch a full performance by the Hanukkah storyteller below.

In the France Pavilion, American guests will probably be more familiar with this version of Santa Claus than the barn Santa from earlier.

In France, he is known as Pere Noel a.k.a. Father Christmas.

Pere Noel is similar to America’s Santa, but he explains some of the French Christmas traditions that we may not be as familiar with.

Watch Pere Noel in the France Pavilion below.

Finally, Father Christmas appears in the U.K. Pavilion — in a green robe instead of red.

Like Pere Noel, Father Christmas talks about how Christmas is celebrated in the U.K. while talking with children in the audience.

Watch Father Christmas tell his story in the video below.

Next
REVIEW: Holiday Sweets & Treats Delights at the 2021 EPCOT International Festival of the Holidays