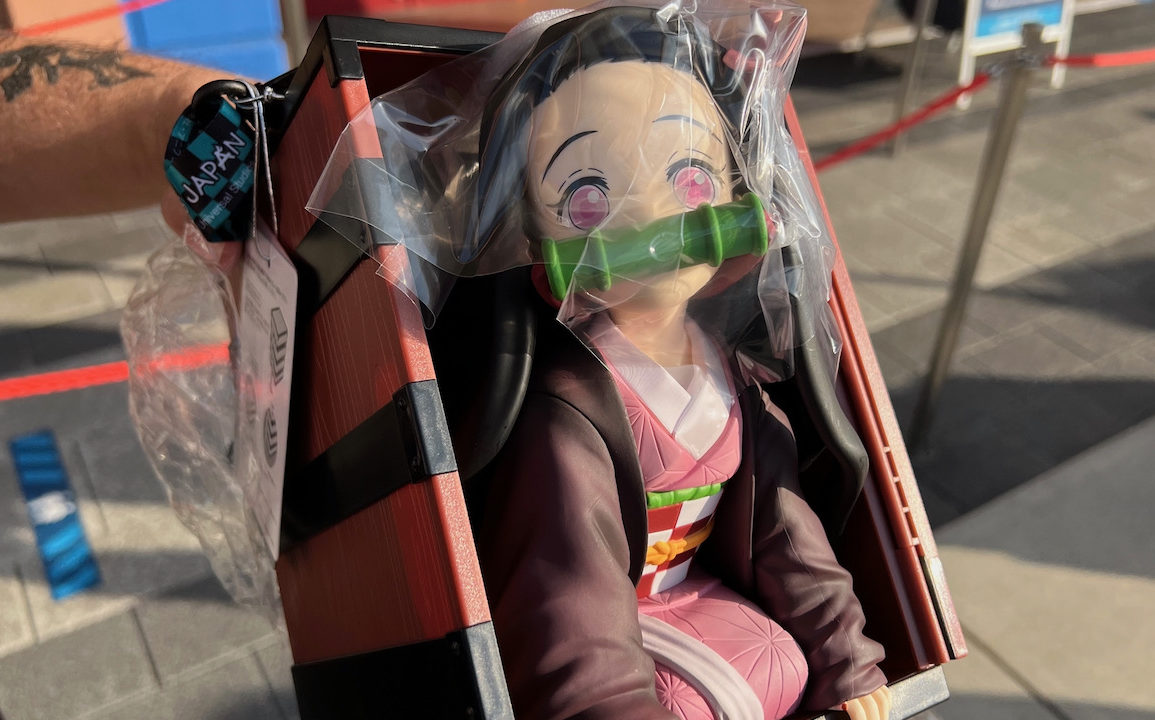 The holiday season has finally descended upon Universal Studios Japan, so naturally we descended upon Osaka ourselves to check out the latest happenings at this wonderful park! There’s so much going on, so let’s not dilly-dally.

Unlike last year, banners at the entrance remained Super Nintendo World-themed, as they have been since February.

Despite being close to the weekend, the line hardly extended out into the ticket booth area when we arrived, and most people seemed keen to arrive at the park later in the morning.

Most of the people lining up made a beeline straight for this popcorn stand in the Hollywood area, selling the coveted “Demon Slayer” Nezuko popcorn bucket.

Due to extremely high rates of reselling on third party sites like Mercari, new rules were instated requiring guests to scan their Studio Pass in order to purchase the bucket, and that only one per guest would be sold. Additionally, purchases for resale are prohibited. So prohibited in fact that Universal Studios Japan recently announced a partnership with Mercari to crack down on reselling of merchandise and park tickets.

If you brave the line as one of our readers did, you’ll find this lovely plastic popcorn bucket themed to Nezuko from the extremely popular anime franchise “Demon Slayer”. Some guests reported waiting as long as 4-5 hours when it first released, however the line rarely extends past 90 minutes now.

A fun detail we noticed over at The Amazing Adventures of Spider-Man—if the wait time is 20 minutes, the magnetic displays will feature the 20th Anniversary “NO LIMIT!” colors within the numbers.

Back under the canopy, Woody and Winnie Woodpecker were sporting their Christmas best for guests to visit. Gotta love their enthusiasm!

At Hollywood Dream: The Ride and Backdrop, a “Demon Slayer”-themed special story has taken the place of “Rat-Tat-Tat”, the Halloween theme song.

Stores all around Hollywood Boulevard are decorated for the holidays on the outside, even somewhat subtly.

Studio Guides for the holidays display all of the holiday fun of course alongside Super Nintendo World.

And over in Rodeo Drive Souvenirs, the entire corner of stationery has been replaced with The Wizarding World of Harry Potter merchandise.

But what about Beverly Hills Gifts? It played home to Potter merchandise for seven years, but they’ve restored it to a rather generic condition and placed all of the holiday merchandise within instead.

Across the way in the Universal Studios Store, an entire chunk has been devoted to “Demon Slayer” merchandise while the Demon Slayer XR Ride is running through February.

In front of Rodeo Drive Souvenirs, guests can get special makeup done themed to Demon Slayer characters along with the usual movie makeup offerings.

The Cinema 4-D remains closed after over a year and a half, but construction walls and scaffolds remain up around the structure. Perhaps the space is being transformed into something new, or perhaps some extensive maintenance is necessary before Shrek and Sesame Street can move back in.

Down the ways a bit is a cart selling “Demon Slayer” cosplay garb such as robes for guests to wear around the park.

The big hit this season is the Demon Slayer XR Ride, temporarily taking over our beloved Space Fantasy: The Ride through February.

There was even a line for this photo op of main characters Tanjiro and Kyojuro. Waits for the attraction often exceeded three hours, even as other attractions in the park barely hit one hour.

Space Fantasy Station has also temporarily transformed into a “Demon Slayer” shop, with plenty of park-original merchandise to commemorate the blockbuster franchise.

Over in Gramercy Park, we finally got to see the Christmas tree we were so hyped for… and it lived up! The multiple swirling colors looked excellent during the day, and in the evening even more so.

The Universal Studios Japan app and Instagram both have a new AR filter featuring the tree and Santa hats on everyone in the shot.

Closer to Louie’s New York Pizza Parlor, a special area in the Palace Theatre entrance has been set up to give exclusive Annual Passholder pass cases. They’re nothing special, just a plastic sleeve with a new design.

Both indoor mask-free venues remained closed as the weather transitioned into cold. Since no themed restaurants are underway with Lombard’s Landing, the seafood joint also is closed until further notice.

Fossil Fuels in Jurassic Park, however, reopened for the first time since June 2020 to serve up the extremely popular turkey legs.

Next door, the Discovery Restaurant has a few Christmas-themed items to satisfy those darned paleolithic holiday hunger pangs.

In the Wizarding World of Harry Potter, two new flavors of roll cake have replaced the Cauldron Cupcake and the Honeydukes Cupcake, both of which had been sold since 2015. There’s also a new box of chocolates with random Bertie Bott’s Every Flavour Beans on top.

Hogwarts Castle was looking particularly lovely in the afternoon light when we visited!

What wasn’t looking lovely were the lines. Butterbeer, the Three Broomsticks, even spells had rather sizeable lines. Guess that’s the consequence of capacity going back up after the States of Emergency finally ended.

Over at Universal Wonderland, very little holiday decor was put up aside from these new costumes for Hello Kitty, Elmo, and Snoopy in the 20th Anniversary colors.

As you may have heard, a minor fire caught at Yoshi’s Adventure a couple of weeks ago. During our visit, it remained closed for the entire duration, and in fact only just reopened a couple of days ago.

As construction progresses on the exciting Donkey Kong expansion to Super Nintendo World, we look forward to passing through this barrel in only a few short years and exploring the jungle!

That’s the latest news from Universal Studios Japan, we hope you had an amazing time checking out the latest news with us! And of course, let us know in the comments what your favorite part was.