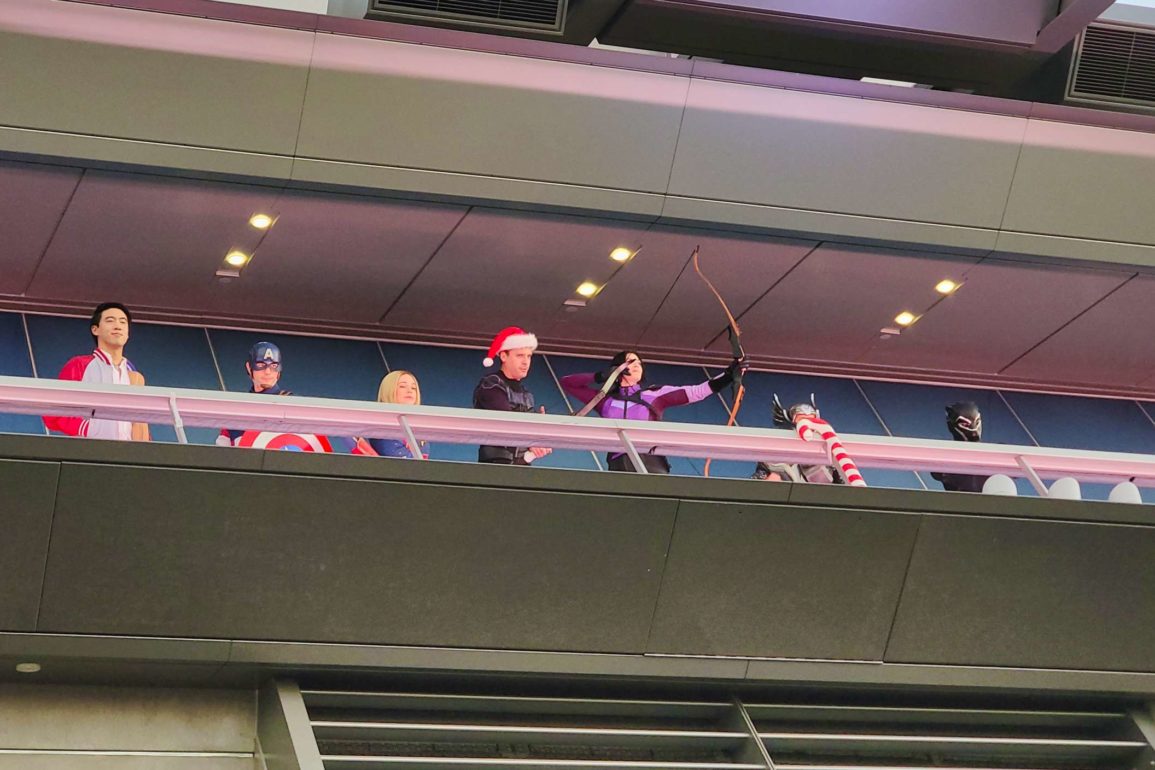 Hey there, hi there, ho there! We are back at the Disneyland Resort to see what’s new and good amid the rush of Holiday crowds. Join us as we see both parks and Downtown Disney.

The stage for the upcoming Candlelight Processional is already being built. The event will be held this weekend on Dec 4 and 5.

While we were checking out the Candlelight Processional stage, a Holiday Cavalcade happened by. We were able to catch it just in time and recorded the whole thing for you.

We also stuck around to see A Christmas Fantasy parade in the afternoon. We saw it at night a few weeks ago, but it is just so beautiful in the sunlight.

You can watch the full show during a nighttime performance at Disney Merriest Nights on our YouTube channel.

And while we were in a festive mood, we headed down to New Orleans Square to take a ride on Haunted Mansion Holiday. Luckily, the ride stopped several times, and we were able to grab some nice pictures inside. Take a look.

Every ride through brings new details to be noticed, like this jack-o-lantern carved with a giant 20 in honor of the 20th anniversary of the overlay this year.

No slow down here; we had to shoot while moving. This is still one of the hardest shots to get right at Disneyland.

You can see the whole ride-through video and photos from opening day.

In the World of Disney store, we found some cute new earrings by Baublebar. There are three sets of earrings; click the link to see them all.

We also found a new holiday t-shirt (above) and a Walt’s Holiday Lodge keychain (below). You can read about them both right here.

The Lion King Wishables are in stock at World of Disney the same day they debuted on shopDisney.

The first wave of Disneyland 2022 merchandise has hit the shelves of World of Disney. There is a photo frame, apparel, a calendar, glassware, and more. Take a look at it all right here.

We also found a second wave of 2022 merchandise after this one, and you can see all of that right here.

Many of the Marvel heroes and villains were out greeting guests today. Loki looked down over his subjects earlier in the day.

After Loki fled the scene, Captain Marvel, Shang-Chi, and Black Widow all greeted guests at once.

They were soon joined by Captain America, Black Panther, and Thor as well.

All the available Avengers assembled alongside Hawkeye and Kate Bishop for the finale of the new Avengers Assemble Hawkeye Holiday show that takes place daily atop Avengers Compound. Hawkeye gathers everyone together to take a Christmas card photo, as seen here.

With sunset fast approaching, we had to get out of the chilly (for LA) night air and head for home. Thanks for riding along with us. We’ll see ya real soon!