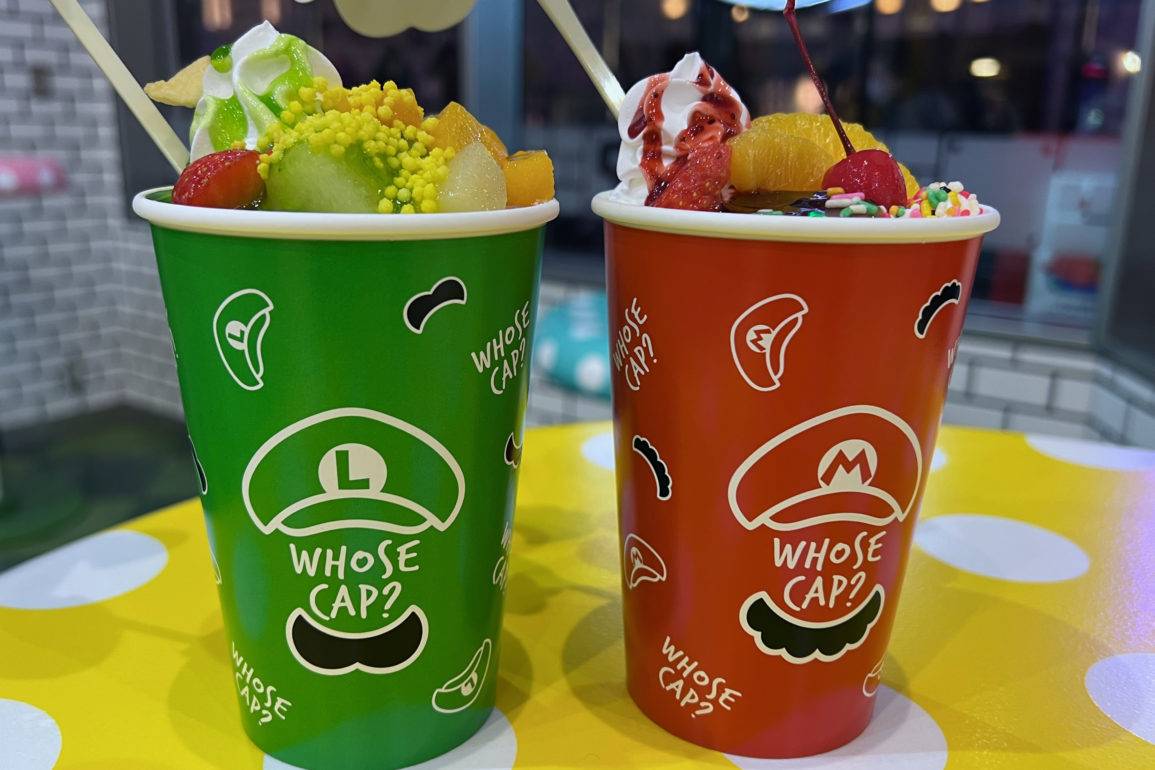 Universal Studios Japan is in the middle of Mario mania thanks to its massive Super Nintendo World expansion opening earlier this year. Work on a second phase is already in progress, and even a parade is coming next spring featuring the mustachioed plumber as one of the key characters. But the latest drinks featuring Mario & Luigi at the Mario Cafe left us puzzled at first, just based on their presentation.

These drinks aren’t served within Super Nintendo World itself, like the Super Star Hot Yuzu Lemonade, but rather at the Mario Cafe near the park’s exit. This spot is more famous for serving cap-shaped treats and interesting mixed sodas which we tried last year, but these two items are brand-new for winter 2021!

Like their cold soda counterparts, these two come served with the appropriate moustache attached to the spoon (rather than straw). The cups are wrapped in the still-confusing “Whose Cap?” art that lines the merchandise sold at the Mario Store next door.

These two drinks, but Mario in particular, are ideas that I have to wonder who came up with. We’re usually very entertained by the creative treats served at Universal Studios Japan, but these two were more “huh?” weird rather than “amazing!” weird. The Mario’s Pudding a la Mode Hot Parfait is made up of a lot of whipped cream holding up a raspberry icing, some mandarin orange slices, a cherry with a pit, a half strawberry, lots of sprinkles, and of course a dollop of pudding a la mode. And under all of this decadence? Hot cocoa, which actually takes up about 2/3 of the drink itself.

This one was certainly the more strange of the two. Universal Studios Japan has rather watery cocoa. It’s not chocolatey enough, which means if any fruits fall through the barrier and into the drink, the taste combination is just bad. Orange chocolate is a combination we love, but here it was just wrong. On top of that, the pudding is rather thick and can also fall through after enough time unless you eat it quickly. Between the lackluster cocoa and the strange dollops of fruit and pudding on top, we recommend giving this one a pass.

While still strange, Luigi’s offering was certainly our favorite of the two. Luigi gets another bed of whipped cream on top of hot cocoa, on which rests canned peaches and pears along with a lot of apple-flavored syrup, sprinkles, and another strawberry half.

While the clearly-canned fruits on top were a bit of a cheap touch, we did still enjoy this one a bit more as the less-intense flavors allowed some fruits to be mixed into the cocoa without as much flavor contrast. The apple syrup on top added a nice tang, although you want to keep it out of the cocoa if at all possible. Other than those notes, still not much to write home about although it certainly is the better of two very strange choices.

If you find yourself at the Mario Cafe at Universal Studios Japan in the winter, both of these choices are equally confounding, but at least one will leave you less disappointed than the other. Let us know in the comments if you want to give these a try!