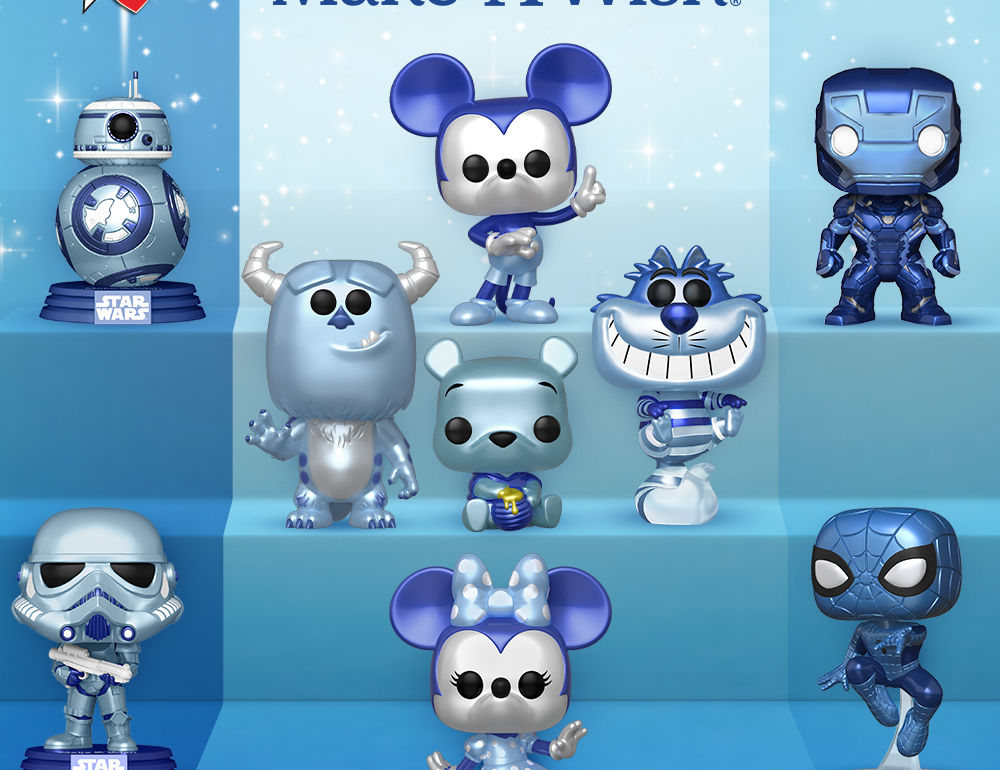 Funko has announced their next Pops! With Purpose line, which will be a collection of Disney figures created in partnership with Make-A-Wish. Funko also announced they are making a $150,000 donation to Make-A-Wish. Check out the new figures and read the press release below.

Funko, Inc., a leading pop culture lifestyle brand, in partnership with Make-A-Wish, today announced the newest Pops! With Purpose product assortment featuring iconic Disney, Pixar, Marvel, and Lucasfilm characters. Each Pop! With Purpose figure sold will feature a designated sticker and box art indicating that Funko has made a charitable donation to the organization. The new collectibles line will be available online and in stores on April 4, leading up to World Wish Day on April 29.

“Funko understands the importance of giving back by supporting causes that are close to the hearts of our employees, fans, and the greater community,” said Andrew Perlmutter, Chief Executive Officer at Funko. “We are honored to support Make-A-Wish’s efforts as they work around the clock to fulfill children’s wishes.”

Regardless of sales, Funko will donate $150,000 to Make-A-Wish to help fulfill the life-changing wishes of children with critical illnesses.

In collaboration with GameStop, Funko will also be launching in-store activations for Make-A-Wish recipients at select GameStop stores nationwide during the month of April.

“World Wish Day is all about the Make-A-Wish community coming together in celebration of wishes that can help kids build the physical and emotional strength needed to fight a critical illness,” said Richard K. Davis, president and CEO, Make-A-Wish America. “We are so grateful to have Funko join the celebration and find a fun way to involve a couple of our other key supporters in Disney and GameStop as well.”

Available at all major retailers and online beginning April 4, the latest Pops! With Purpose product assortment will feature fan-favorite Disney, Pixar, Marvel, and Lucasfilm characters, including:

Disney has worked with Make-A-Wish for more than 40 years and together have granted more than 145,000 magical wishes globally.

Introduced in 2021, Pops! With Purpose ties some of Funko’s most beloved characters in Pop! aesthetic with philanthropic causes that are important to the company, community, and fans.