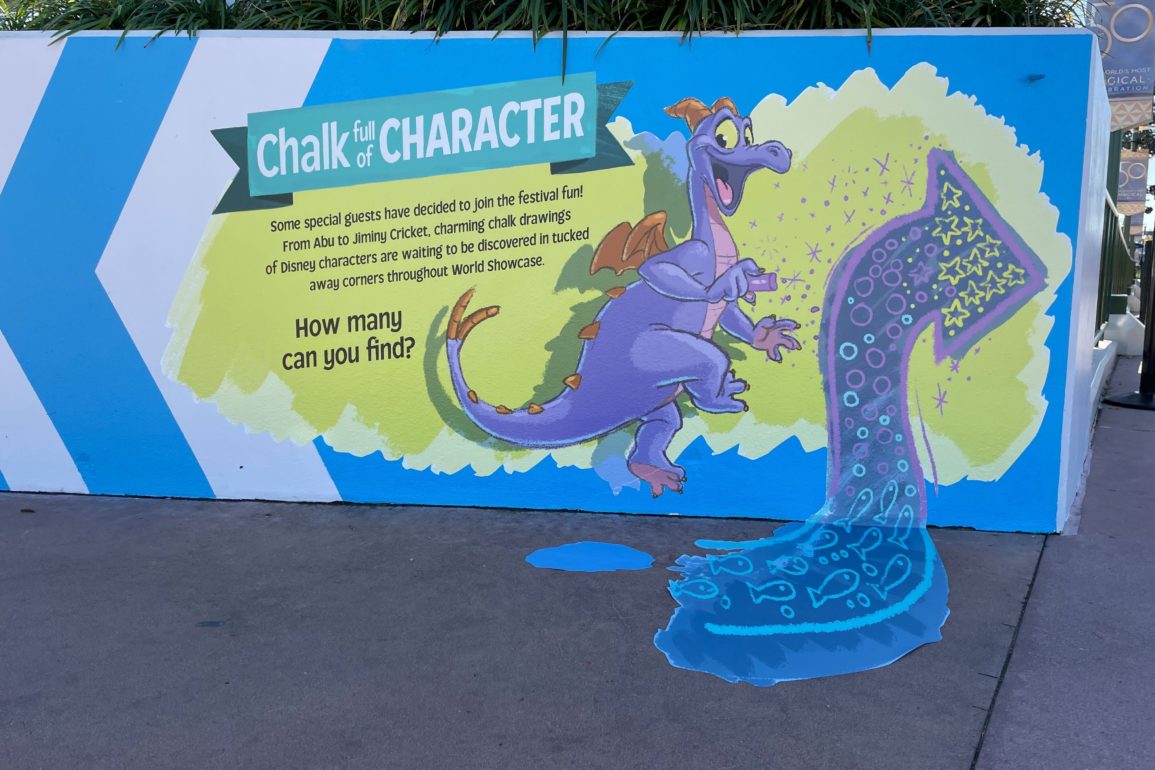 PHOTOS: Full Guide to ‘Chalk Full of Character’ at the 2022 EPCOT International Festival of the Arts

The 2022 EPCOT International Festival of the Arts officially begins this weekend and guests can already find characters hidden throughout World Showcase as part of “Chalk Full of Character.” Many decals went up early, but we now have a full guide to where you can find each character!

A mural about “Chalk Full of Character” featuring Figment is near the entrance to World Showcase.

Let’s start in Canada, where a “chalk” character can be found playing by the water.

Koda from “Brother Bear” appears at the base of the “bridge” next to the entrance to Le Cellier Steakhouse.

Outside the rear entrance to The Tea Caddy, you might just spot Peter Pan’s shadow trying to get in through a window.

Outside Lords and Ladies, Robin Hood, Little John, and Skippy can be seen.

Lumiere appears across from the entrance to L’Artisan des Glaces.

The “Aristocats” can be seen near Maison du Vin.

They’re running along a wall next to the La Petite Rue street sign.

Remy and his brother Emile can be found in the “Ratatouille” expansion of the pavilion,

Remy is running up a pipe, while Emile is above him eating cheese.

Hidden among the many corners of the pavilion, eagle-eyed guests can spot Abu attempting to swipe a small pot.

Duffy and his artist friend Gelatoni are on the wall outside Mitsukoshi in the Japan Pavilion.

They’ve painted a Mickey on the wood beam beneath them.

On the side of the building with the Kidcot Fun Stop, Amos from the short “Ben and Me” can be seen flying a kite.

Characters from “Luca” are now featured at the Italy pavilion, including Luca, Alberto, and more.

Additionally, Jiminy Cricket can be seen hidden within the brick of a nearby façade.

Pascal from “Tangled” is up to his old tricks, painting a sun on the side of a shop.

We found a second Pascal snatching up some popcorn.

We spotted him again blending in with the Volkskunst Clocks and Crafts sign. Sneaky Pascal.

The three hyenas from “The Lion King” are fighting over a hot dog on the Refreshment Outpost building.

Little Brother from “Mulan” can be seen outside the House of Good Fortune.

Straight from Arendelle, the Snowgies can be seen above the restrooms.

We later found Bruni hiding out next to Kringla Bakeri Og Kafe.

He’s keeping the area warm from this fireplace.

Dante is back at the front of the pyramid. On the left side, he appears in his dog form…

…while on the right side, he appears as an alebrije.

Which one of the “Chalk Full of Character” cameos is your favorite? Let us know below in the comments!

Next
PHOTOS: Full Guide to Photo Spots at 2022 EPCOT International Festival of the Arts