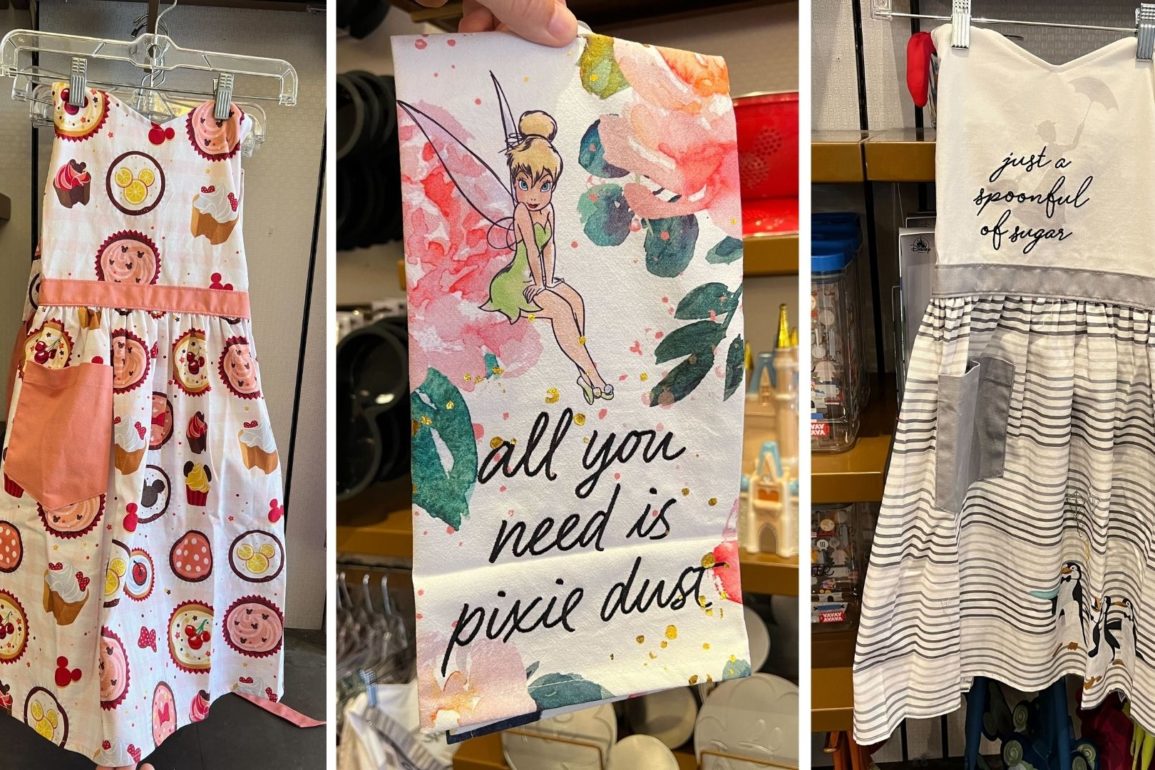 This adorable new oven mitt is in the shape of a cupcake.

There are also these kitchen towels to match.

The towel features a cherry pie with the cherries being in the shape of a hidden Mickey.

There is also a Mickey Mouse cupcake on the other side.

These towels have a sort of faded plaid pattern.

There is also an apron to match.

The apron features the same pattern as the towels.

You can see the cherry pie, cupcakes, more Mickey icons, as well as Minnie’s bow throughout the pattern.

It ties in the back with a pink bow.

It is a light blue color and features Cinderella’s mice and bird friends, including Jaq and Gus.

It ties in the back with a white bow.

There is also a kitchen towel to match.

On the towel, it says, “Make the fire, fix the breakfast, wash the dishes, do the mopping, and the sweeping, and the dusting” which are lyrics from The Work Song in “Cinderella.”

There is also a “Mary Poppins” apron in white, gray, and black. You can see an outline of Mary at the top with “just a spoonful of sugar” embroidered in black cursive across her.

The bottom of the dress has a striped pattern with an embroidery of three kites.

An image of the penguin waiters are on the bottom of the dress.

It ties in the back with a gray bow.

And of course, there is a kitchen towel to match.

This towel is white with the same image of the penguin waiters.

We spotted this new glass measuring cup, part of the MouseWares home collection.

It is a clear glass measuring cup with rainbow Mickeys signifying the measurements.

It has a red rubber handle.

We also spotted this Tinker Bell oven mitt and matching towel. We first saw these over at Disneyland.

The matching towel says “all you need is pixie dust.”

We also saw this new metal pot holder in the shape of a Mickey head.

All of these can be found at Celebrity 5 & 10 in Disney’s Hollywood Studios.

Next
REVIEW: New Sour Cherry Churro Is One of the Best Churros in Disneyland History