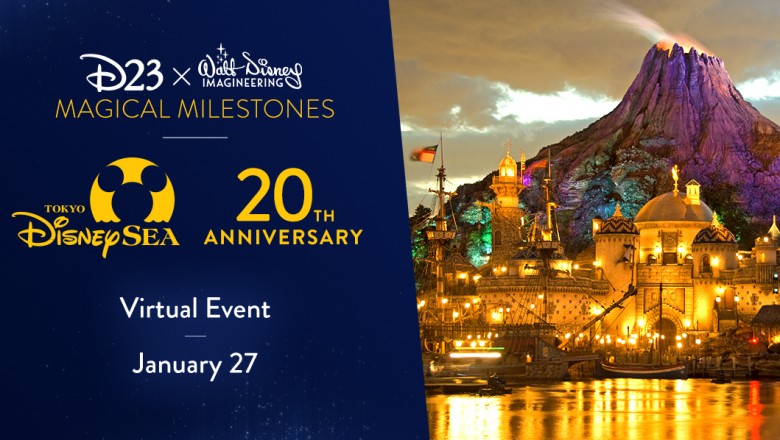 D23 and Walt Disney Imagineering have announced a new event to celebrate the 20th anniversary of the place Where Adventure and Imagination Set Sail, Tokyo DisneySea.

The event is the fourth in D23’s Magical Milestones series. This exclusive virtual event will feature a grand gathering of Imagineers who will take us on a journey spanning everything from the park’s origins and history to beautiful artwork and storytelling, to plenty of behind-the-scenes stories that will let us meet some of the fascinating people who bring our favorite places to life.

Hosted by Academy Award–nominated director Leslie Iwerks, the event begins with a special roundtable discussion at the Walt Disney Imagineering Glendale campus. Emily “Emo” O’Brien (Portfolio Executive Producer), Daniel Jue (Portfolio Creative Executive), and Craig Russell (Project Integration Executive) will look back at the park’s origins to explore how these “ports of call” make up one of the most ambitious and unique theme parks ever created. The discussion will range from the park’s original mission, to how it has been embraced by fans and celebrated multiple expansions, to the phenomenon of Duffy & Friends—reflecting on the park’s first twenty years and looking to its shining, shimmering future!

We’ll then go across the Pacific to Tokyo, where David Hoffman (Executive Creative Development) and some of his team members will take us on our virtual tour around the ports of call nestled alongside Tokyo Bay.

Embarking from the original ports of call of Mediterranean Harbor, Lost River Delta, American Waterfront, Mysterious Island, Arabian Coast, Mermaid Lagoon, and Port Discovery, we’ll look at some of the most iconic attractions and entertainment. As we go through the years, we’ll celebrate additions to the park, such as Raging Spirits, Tower of Terror, Nemo & Friends SeaRider, Toy Story Mania! and Soaring: Fantastic Flight—all culminating with the upcoming expansion of Fantasy Springs, which unfolds the worlds of Disney films such as “Frozen”, “Tangled”, and “Peter Pan”, coming in 2023.

D23 Members are in for a treat as they get to hear directly from an all-star roster of creative talent from around the world, including:

Those interested may register on D23.com, where they will be given a unique access code to watch this special panel, which will premiere Thursday, January 27, at 10 am Pacific Time and remain available until Sunday, February 27, at 11:45 pm Pacific Time.

D23 Gold Members may view the event for free, while D23 General Members may purchase an access code for $10. Captioning will be available in both English and Japanese.

Will you be watching this special D23 event? Let us know in the comments below!

Next
Early Arrivals for Star Wars: Galactic Starcruiser Will Be Sent to Disney Springs