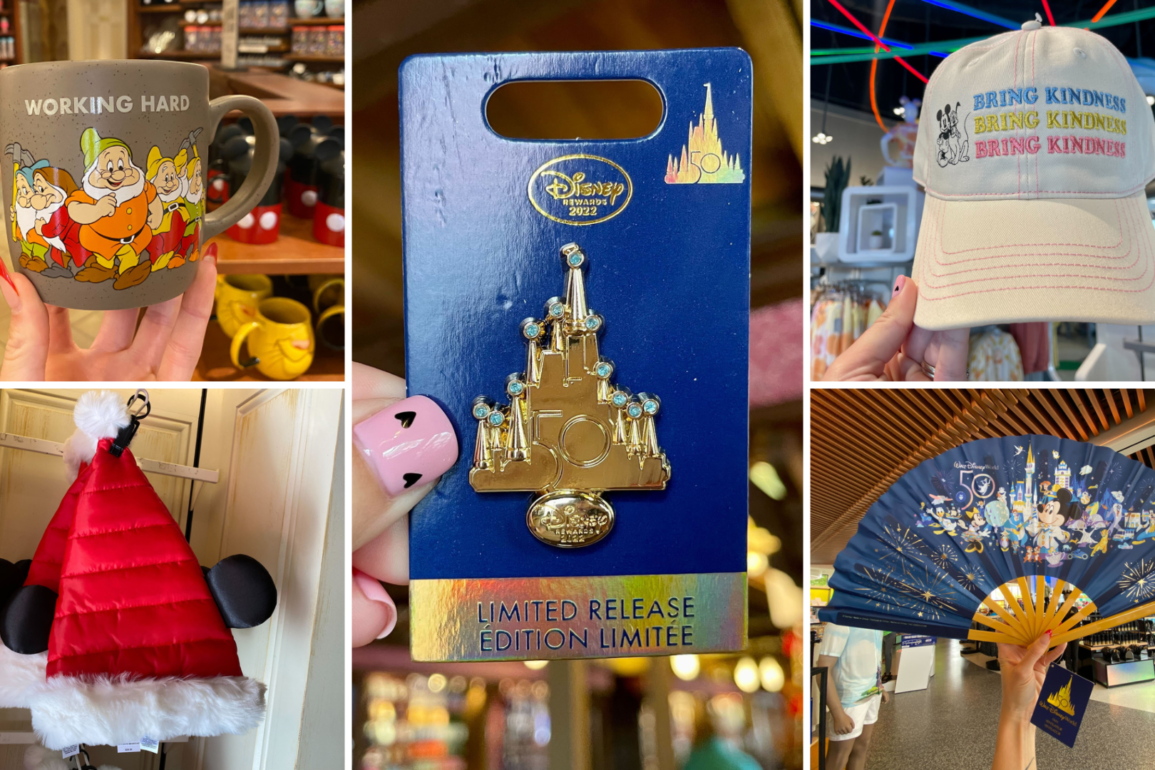 Welcome to the merchandise roundup for February 17, 2022! Each new day brings new merchandise to Walt Disney World, and we know you don’t want to miss a thing, so we gather new releases here. Today we visited Magic Kingdom and EPCOT. Let’s look at our discoveries.

This mug features the seven dwarfs. On one side, five of them are “Working hard.”

On the other side, Sleepy and Dopey are “Hardly working,” a.k.a. taking a nap.

This mug and the one below were in the Emporium at Magic Kingdom.

This Jafar mug is tall and black and features the villain’s face on one side.

The other side says “Insert eye roll here.”

The mug has a subtle snake scale pattern in the background.

The Rapunzel pen is shaped like the princess wrapped up in her long blonde hair.

Pascal sits on her shoulder.

The pen uncaps from the bottom.

Tiana is in her green wedding dress and crown on this pen.

The red pointed triangle of the hat is quilted. Black Mickey ears stick out of the sides and it’s lined with white faux fur.

This new ornament from the Sketchbook collection was also in Ye Olde Christmas Shoppe.

It features Minnie and Mickey in a hot air balloon. The balloon is heart-shaped and says “Be Mine” on it.

In Star Traders at Magic Kingdom was this new baseball cap. It is white with pink stitching.

Mickey and Pluto are pictured in black outline on the front next to the words “Bring kindness” repeated three times in blue, yellow, and pink.

“Disney Parks” is embroidered on the back, above the adjustable strap.

It features the 50th anniversary logo on the front and blue gems on each turret. “Disney Rewards 2022” is on a plaque at the bottom.

We found this pin in Frontier Trading Post at Magic Kingdom and Pin Traders at EPCOT.

This new folding fan was in Creations Shop at EPCOT.

It is dark blue and covered in gold fireworks. At the center are Mickey and friends, plus various park icons and characters, such as Big Al, Woody, BB-8, and the Yeti.

These Donald Duck sweatpants were also in Creations Shop.

They are light grey and covered in graffiti style Donald autographs, the word “Angry,” and more.

They also feature Donald’s face throughout.

This Elsa purse was in The Fjording in the Norway Pavilion.

It’s made of shiny silver fabric with a diamond pattern. A purple and blue snowflake is on the flap, with Elsa’s face in a gem at the center.

It opens up to reveal a sketchy blue pattern of Anna and Elsa.

We found this set of four pairs of underwear in Disney Traders.

They each have a different Mickey pattern in his signature red, yellow, and black colors.

This purple tee has a tie at the bottom and says “Freedom to be me” and “Walt Disney World” on the front.

The “O” of “freedom” is replaced with a rhinestone Mickey head.

This was also in Disney Traders.

These light grey sweatpants have black and red stripes at the waist and ankles.

These pants were also in Disney Traders at EPCOT.

Show Your Love for the Dapper Dans With a New Loungefly Hat Available at the Magic KingdomMarch 31, 2022
BREAKING: Disney Cruise Line Will No Longer Require VaccinationsSeptember 27, 2022
UPDATE: Walt Disney World Annual Passholders Will Have to Show My Disney Experience for Dining and M...May 24, 2022