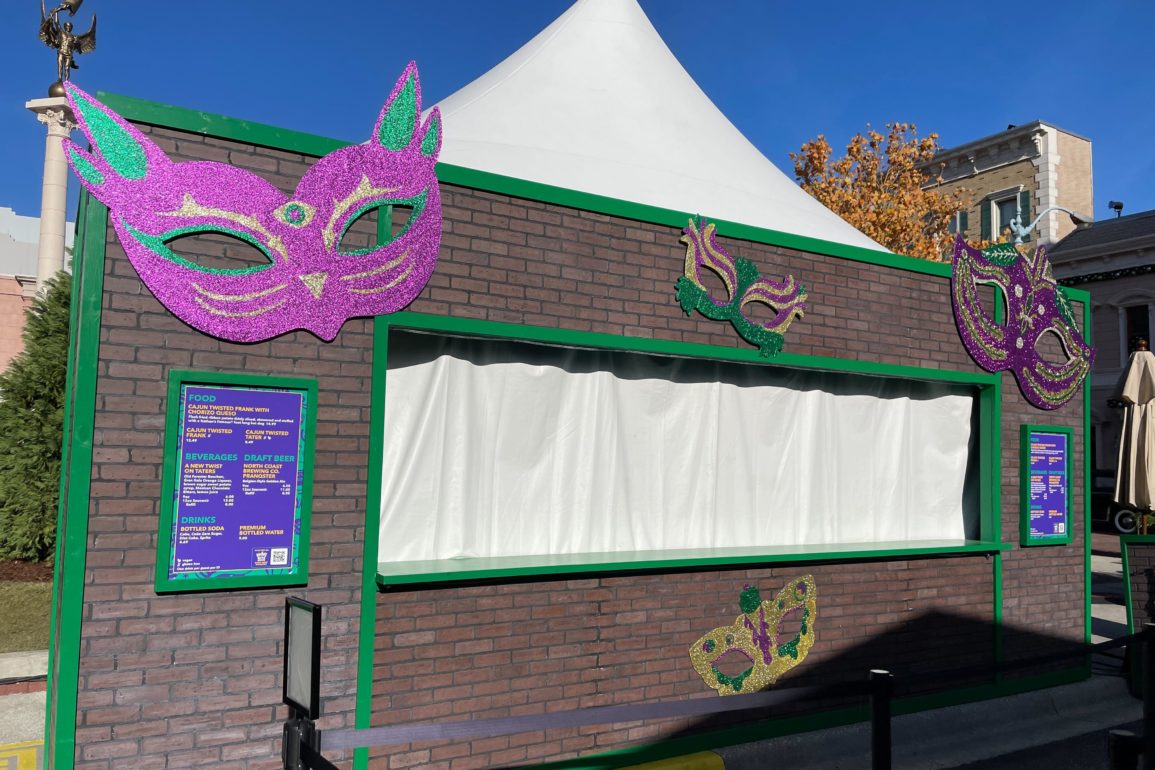 Menus for the Mardi Gras booths at Universal Studios Florida have finally appeared, two days before the celebrations begin. Universal previously gave us a sneak peek at some items but now we know everything that will be available. The event kicks off on Saturday, February 5, and we’ll be back to review the new dishes and drinks.

The booth outside the Monsters Cafe has various beverages.

The special cocktails are Category 5 Punch and Piña Verde. There’s also a selection of draft beer, canned beer, and wine.

For anyone seeking a non-alcoholic drink, the booth also has bottled soda and water.

A QR code is available to see all Mardi Gras event menus, but the menus are not yet available online.

Continuing through the New York area of the park, these booths have the most traditional Mardi Gras offerings.

First up is king cake, beignets, and mardi gras marshmallow pie. The Category 5 Punch is also available here, along with the Abita Purple Haze draft beer and bottled drinks.

We then have blackened chicken po’boy and shrimp gumbo with rice. Each of these booths has a different draft beer option.

Moving on, the food truck has various arepas and yucca fries.

At Guido’s Gelato, guests will be able to get tomato basil arancini or a meatball garlic bread pressed slider. The special drinks are the orange dream spiked float, the vanilla-amaretto rum gelato float, and the triple-raspberry gelato float.

Here we have crawfish and shrimp bowls, as well as king cake, beignets, and marshmallow pie.

Near the Animal Actors theater, this booth has shrimp laksa and rou jia mo.

The special drink is non-alcoholic (this is near the kid’s area after all) and is called the Cosmic Mangonada.

Nearby is a volcano-themed booth.

Here will be papas bravas and savory sopaipilla. The cocktail is Cosmic Cornucopia.

The flower-themed booth has all vegan options.

One of the food trucks in San Francisco is serving Nashville Hot Chicken Mac & Cheese, Chicken Biscuit with Red-Eye Gravy, and an assortment of bottled beverages both alcoholic and non-alcoholic.

Across from King’s Cross station are two more food booths.

The first has shrimp and avocado ceviche and sweet corn johnny cake. The drink is Cape Guayaba.

What are you most excited to try? Let us know in the comments.