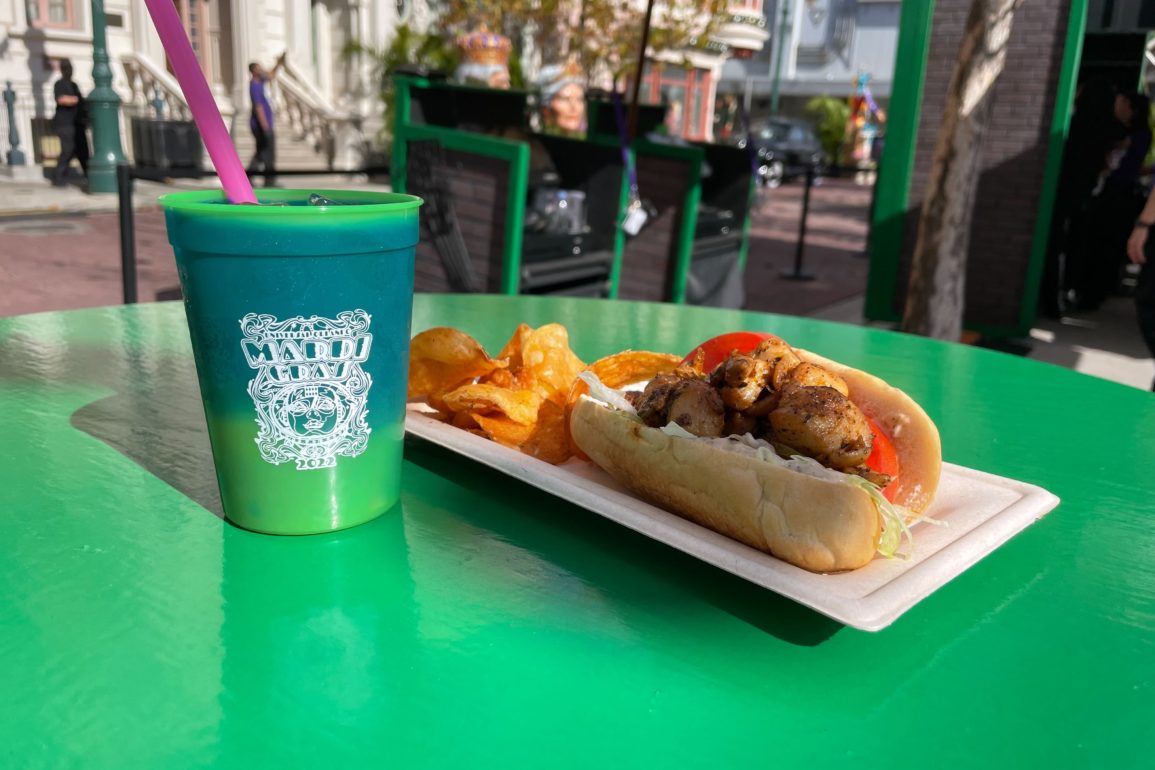 Classic New Orleans-style cuisine is plentiful at Universal Studios Florida during Mardi Gras and this year is no exception. We stopped by one of the booths that opened early for an Annual Passholder preview today to try out some of the offerings.

This is awesome. Our reporter is not really a chicken person, but thought this was perfect.

The chicken was well-seasoned and complemented perfectly by the lettuce, tomato, and pickles.

The Cajun mayo wasn’t too overpowering and it was so good. It really made the entire sandwich.

The bun was also very nice. Everything was of good quality and worked together.

This had four pieces of shrimp and some andouille sausage. It was all very zesty and well-seasoned. There was a nice kick but we wouldn’t call it hot or spicy.

The sauce is thick and rich with flavor from the peppers and okra. We can’t figure out why bacon is on the sign, unless we’re just missing it in the dish.

The shrimp is okay, but we liked food from the other New Orleans counters better.

We liked the sauce and rice but there are better options around than this one, which isn’t memorable at all.

This includes a souvenir cup and a color-changing straw.

The straw turns purple in the drink.

The drink itself is excellent, especially for a pre-mixed drink.

You can taste the alcohol and the sweet fruit juices. The passionfruit flavor comes through the most.

This delicious drink can be found at multiple booths at Mardi Gras this year.

From North Coast Brewing Co.: “Belgian Ales represent the height of the brewers’ art. Sophisticated brewing techniques, yeast blends, and unique flavoring elements have elevated the beers of Belgium to the status enjoyed by wine in other countries. PranQster follows in this tradition using a mixed culture of antique yeast strains that produce a floral nose, a full fruity flavor, and a clean finish.”

This booth is in New York (the French Quarter) across from Transformers: The Ride 3-D, as indicated by the letter “K” on the map below.

Mardi Gras will be celebrated at Universal Studios Florida from February 5 to April 24, and we highly recommend checking out this booth if you come for the event!