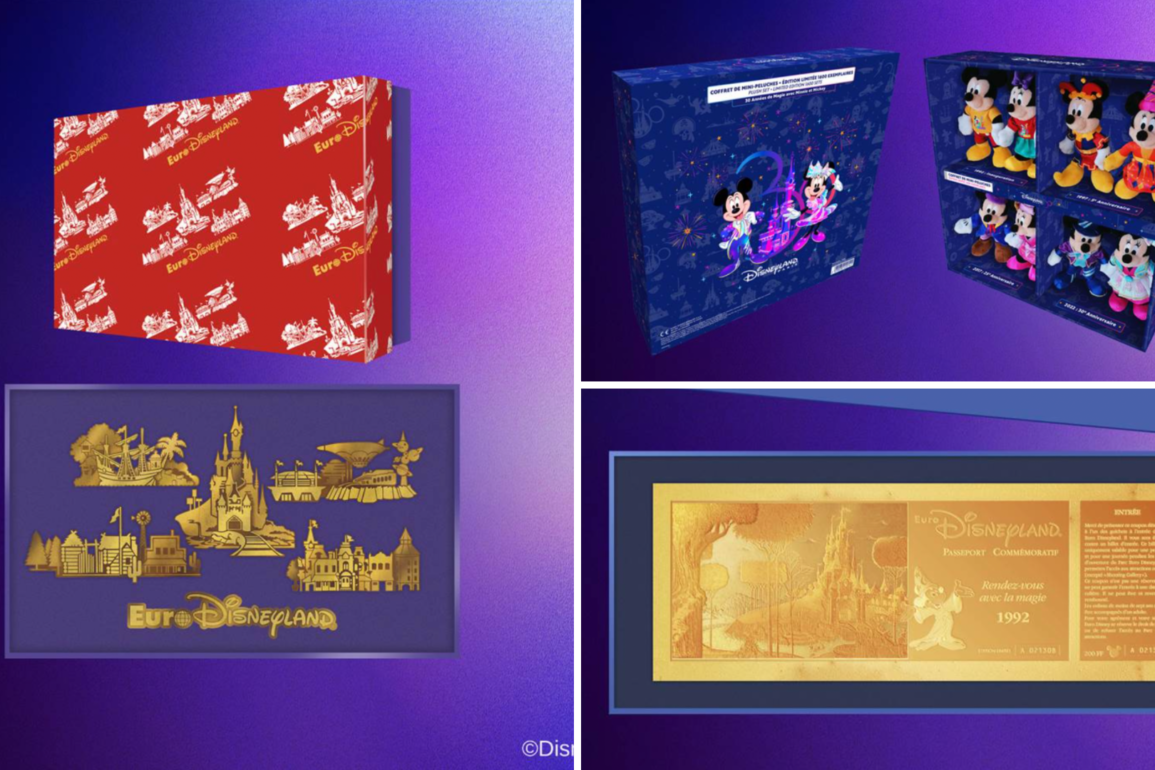 This set includes six golden medallions. Five of them represent different Disneyland Paris icons and landscapes: Sleeping Beauty Castle, the pirate galleon, Discoveryland, Frontierland, and Main Street, U.S.A. The sixth medallion is the old Euro Disneyland logo. This is a limited edition of 1,000.

This is a golden reproduction of the commemorative passport available at the Euro Disneyland opening in 1992. It will be a limited edition of 1,000.

This set includes four pairs of small Mickey and Minnie plush in different anniversary outfits. It will have a limited edition of 1,600.

Some figurines have been previously revealed, including magician Mickey, but we now know there will be figurines of Simba, Donald with Chip ‘n’ Dale at the Sword in the Stone, Mickey driving an Autopia car, and Minnie on a carousel horse. All of the figurines incorporate the 30th anniversary colors of blue and purple.

We also got a better look at the reusable shopping bags that will be available. They feature the 30th anniversary logo in front of Sleeping Beauty Castle on one side. The Earffel Tower and the Avengers Campus logo with WEB SLINGERS are on the other side.

Learn to Defend the Halcyon in Bridge Ops Training on the Star Wars: Galactic StarcruiserMarch 2, 2022
BREAKING: Guardians of the Galaxy: Cosmic Rewind Opening May 27, 2022 at EPCOTApril 4, 2022
'Obi-Wan Kenobi' Sand Sculpture Installed at the Downtown Disney DistrictMay 28, 2022

Previous
REVIEW: Taste Around the Galaxy (Featuring Blue Shrimp) for Dinner on Night 2 of the Star Wars: Galactic Starcruiser

Next
Detail Painting and Wiring Work on Xandarian Starship Outside Guardians of the Galaxy: Cosmic Rewind in EPCOT