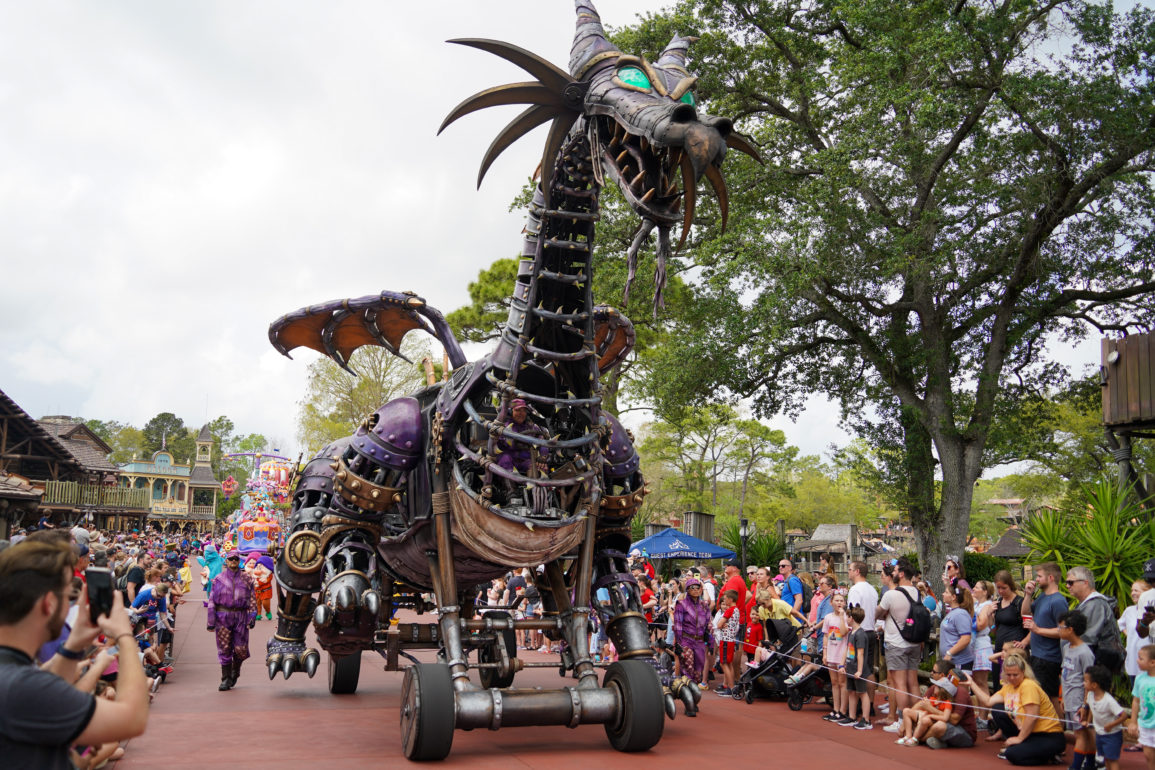 The Festival of Fantasy parade has finally returned to Magic Kingdom after two years. It is the non-holiday parade to return to Walt Disney World, and today (March 9, 2022) is also its eighth anniversary!

Guests gathered to see the parade.

Magic Kingdom Cast Members were the honorary grand marshals for this morning’s parade.

A handful of Cast Members got to ride in the car behind the grand marshal banner.

The parade begins with Princess Belle on a flower-covered float. Previously, dancers led this float.

The Beast also used to appear with Belle, but he was absent.

A banner above Belle reads “Join the Celebration!”

Cinderella is behind Belle, also missing her prince. She spins with a figure of her animal friends fixing up her pink dress.

Behind Belle and Cinderella are characters from “Frozen” on a snowy, mountainous set. Only Elsa and Olaf appeared, with Anna missing. This set spins to reveal Tiana against a mossy wall. Prince Naveen no longer appears with her.

They are followed by the “Tangled” section of the parade. Dancers and Ulf the mime lead the Snuggly Duckling float.

Rapunzel is at the front of the float.

Flynn Rider and some of the hooligans are on giant swinging axes.

Behind the “Tangled” float are some “Under the Sea” dancers.

Ariel sits in a seashell atop the next float, above circling fish and Sebastian.

Flounder is behind her seashell.

The Lost Boys and Wendy dance between the “Peter Pan” and “The Little Mermaid” floats.

The “Peter Pan” float has Skull Rock at the front, with a rainbow behind it. Atop the rainbow is the flying Jolly Roger, piloted by Peter Pan.

Wendy previously appeared on the ship with Peter.

Captain Hook was on the anchor beneath the rainbow and Tinker Bell was on the back of the float. Mr. Smee walked behind.

Tick Tock the Croc is usually behind the “Peter Pan” float, followed by “Brave” dancers and a bagpipe float featuring Merida, but they were all missing. The parade instead picked up with the three fairies and the thorn stilt-walkers.

It was previously announced that the famous steampunk Maleficent dragon float would return with the parade, and we’re happy to see her.

Other dancers were removed from this section.

Pinocchio is at the front of the next float, atop Monstro the whale.

Behind Pinocchio is a mini carnival, and Dumbo sits on Monstro’s tail.

Donald is at the front of a “Fantasia”-themed float.

Pluto is at the back of this float.

Behind it walks Daisy (who used to be on the float next to Donald), Goofy, Chip, and Dale.

Minnie also walks when she used to be in the hot air balloon float with Mickey.

Dancers have been removed from this section.

Mickey closes out the parade on the hot air balloon.

“Zip-a-Dee-Doo-Dah” and “When I See an Elephant Fly” were also removed from the parade’s soundtrack. Watch our video of the parade’s return below.