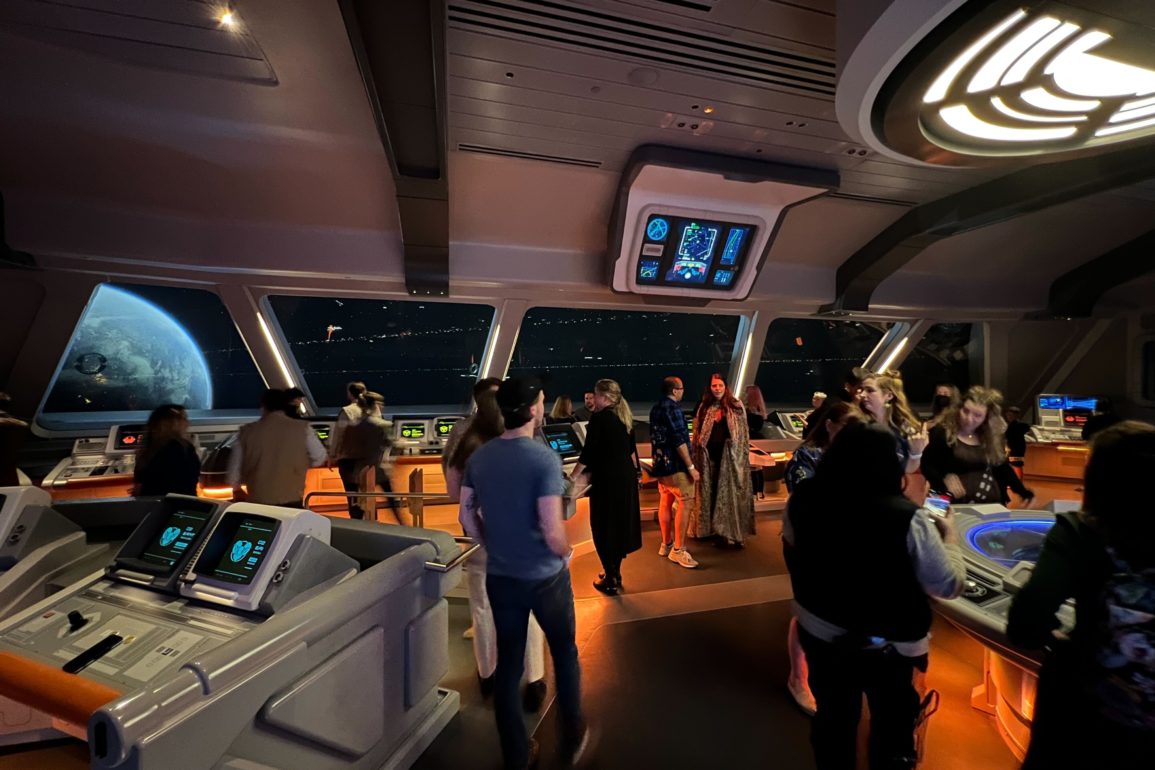 Learn to Defend the Halcyon in Bridge Ops Training on the Star Wars: Galactic Starcruiser

One of the scheduled activities on board the Star Wars: Galactic Starcruiser is Bridge Training, allowing passengers to learn how to operate the Halcyon and defend the ship. This article contains spoilers for the full experience.

The Bridge is located on Deck 6, adjacent to the Atrium.

Guests are introduced to the shipboard computer droid, AJ-10, a.k.a. Watch. Watch controls the bridge systems, enabling the functions of each console.

On the bridge, passengers operate consoles for their training missions, being broken into four teams. Each console displays the logo of the team of which the guest will be part of. The Gold Mynocks console team is named after the creatures first seen when Han Solo lands the Millennium Falcon in a cave that turns out to be an Exogorth in “The Empire Strikes Back.”

The Blue Bantha console team is named for the large, furry beasts of burden used by the Tusken Raiders on Tatooine and, notably, by Boba Fett during his time living as a Tusken in “The Book of Boba Fett.”

Each station consists of a display screen and a control board of switches, buttons, and dials.

Controls per player are presented on each console, and the effects of the mission are displayed in the massive windows at the front of the room. Guests can steer their targeting crosshairs on their console in simulation while watching their own unique marker moving on the main windows in space.

The progress of the training mission is displayed on the large screens on the side of the bridge, with each of the teams’ scores as separate bars, alongside the CSL crew’s scores for comparison.

The other two teams, the Red Rathtars and the White Wampas, are featured here on the score screen alongside the Blue Banthas and Gold Mynocs. Rathtars are a large predatory cephalopod, seen in “The Force Awakens” when being transported as cargo by Han Solo and Chewbacca before being unleashed on the ship to stop a crew of space pirates. Wampas are the large white, furry creatures native to Hoth, one of which attacked Luke Skywalker at the beginning of “The Empire Strikes Back” and lost an arm during Luke’s escape.

Guests take part in the training mission on the individual screens located throughout the bridge, with plenty of screens available for guests who choose to take part. For the weapons system, guests can fire laser cannons and photon torpedos.

In addition to the personal screens, a multi-user console can be found towards the back of the bridge, offering the same exercises, with two passengers per console.

After each training exercise, guests are asked to cycle between stations to experience the other stations. This allows each guest to experience all four roles in training. As guests cycle, they stay with the same team, and the logos change in time to meet them at the next station.

Each of the six banks within the console provides a screen for two guests at a time, but each guest does get their own individual control at the console to take part in the mission.

After the training missions, Captain Keevan takes over the Bridge, along with SK-620, to engage in more story points.

She accepts a transmission from the Resistance with coordinates to the Jinata system and makes the jump to hyperspace.

Upon arrival, the guest trainees get to put their new skills to use, defending and repairing the Halcyon in an asteroid field.

They encounter an escape pod piloted by Chewbacca, who asks for transport. While the First Order is out of earshot, Captain Keevan promises Chewbacca that she’ll hide him onboard the Halcyon so that he can get to Batuu.

You can see our whole experience on our YouTube channel, or by clicking the video below.

We really enjoyed the Bridge Ops training. It’s like a big video game, but there are so many stations and they keep you rotating through so you don’t get bored. When the “call to action” happens and the Captain brings you into the story, it gets very exciting. The games are simple but enjoyable. Our only issue is that it wasn’t long enough. We would have liked 15 extra minutes of the more serious moments to use what we learned.