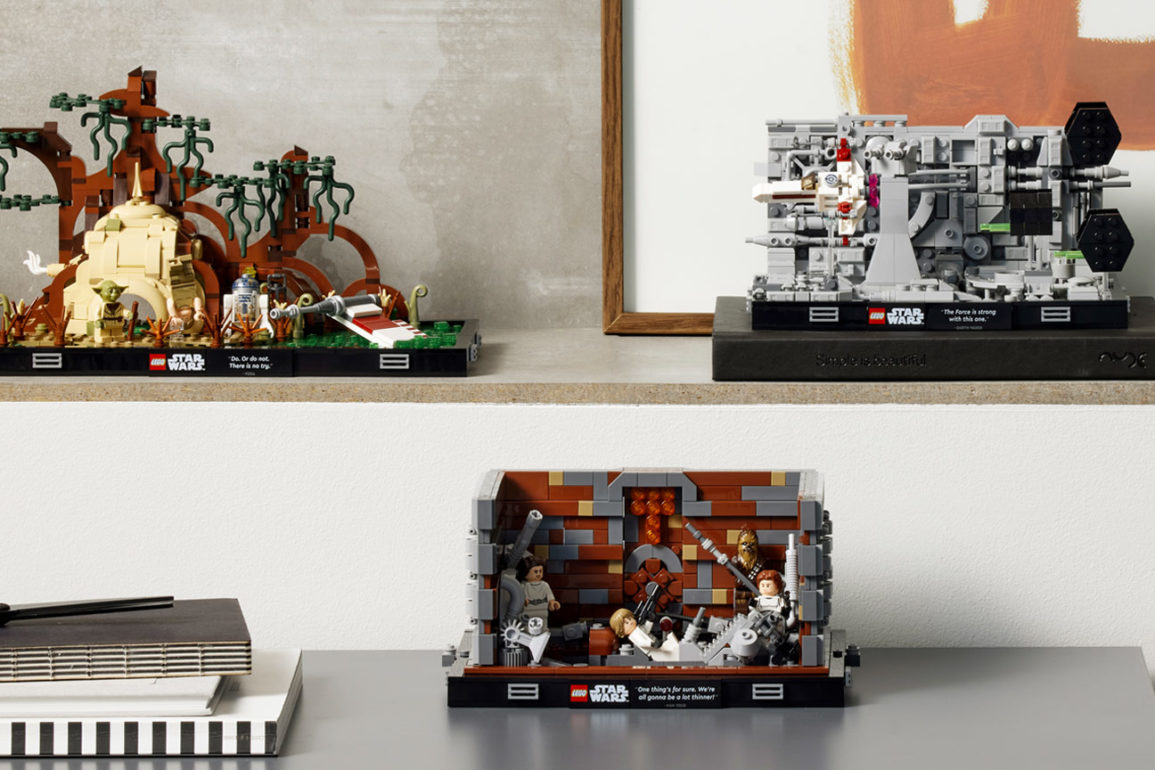 The dioramas are Luke training with Yoda on Dagobah, the Death Star trench run, and a fully-operational trash compactor with Luke, Leia, Han, and Chewbacca.

“For years we’ve been scratching our heads about how to capture the Death Star trash compactor, an extremely iconic scene, in LEGO bricks,” Michael Lee Stockwell, LEGO “Star Wars” design manager told StarWars.com. “But what good is a trash compactor that doesn’t ‘compact’? We needed the function!”

Stockwell and the gang have finally been able to capture the classic scene in LEGO form.

“Replicating a static mess is one thing, but building a function that works repeatedly without jamming, required coming up with a solution that would somehow control the mess. Inspiration for the final solution was taken from live theater — imagine recreating the movement of ocean waves with the use of stage props.”

“The Diorama series is really something special, and something we are very excited about,” said Jens Kronvold Frederiksen, LEGO “Star Wars” design director. “The models are built on a frame. On the frame there is a small, printed plaque with a famous phrase from that particular movie scene. The frame is always the same depth — 20 LEGO modules, which is a perfect size, as it makes it fit on a regular bookshelf. So they’re perfect for display.”

“It’s great getting the opportunity to pack in a lot of detail into a build in this form of presentation,” said Jason Zapantis, LEGO “Star Wars” designer. “It’s fun to present a highly-detailed scene akin to an iconic snapshot from the film with more intricate construction techniques.”

“It’s such a different experience from building minifig scale play models,” added Jme Wheeler, LEGO “Star Wars” designer. “I enjoy being able to look at the element library in a completely different way. Hopefully fans will enjoy the greebling, and maybe even get inspired for some of their own builds.”

These are LEGO’s first dioramas, which use relatively complicated building techniques and are intended for adults.

The trash compactor set will be available exclusively at Walmart stores, in addition to LEGO stores and LEGO.com.

All three sets are available for pre-order now and will be released on April 26. Click the links below to pre-order: