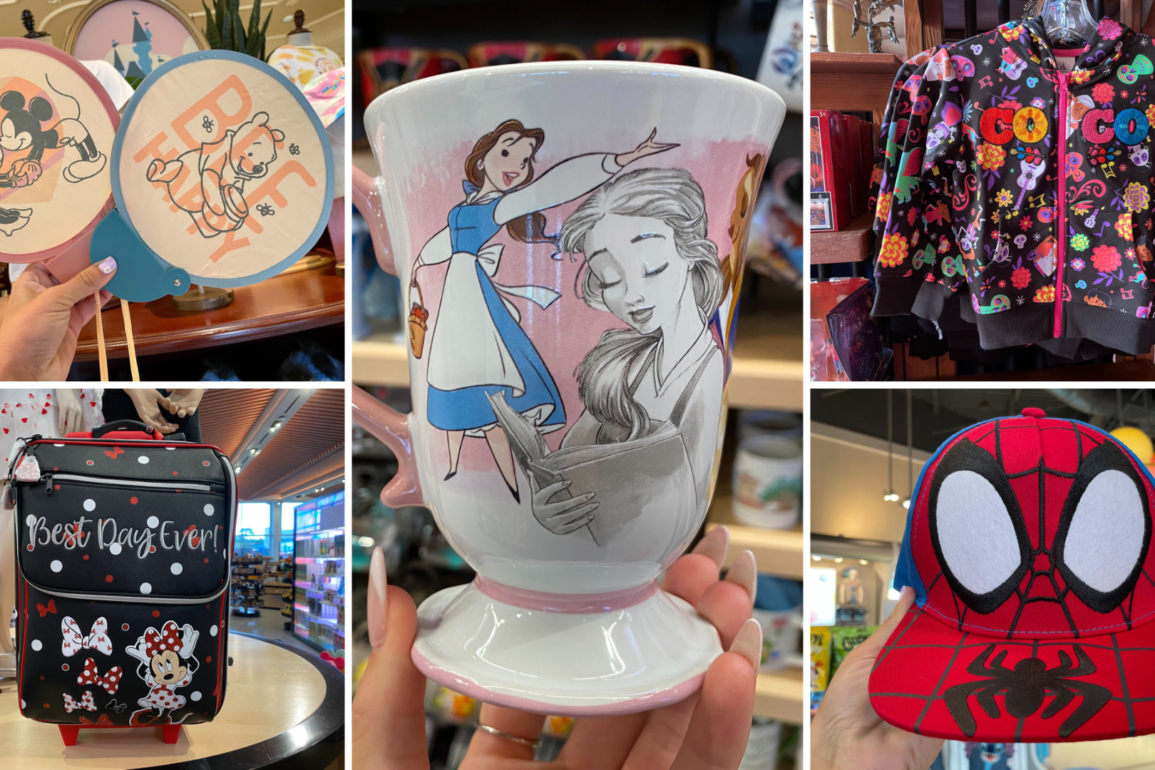 Welcome to the merchandise roundup for March 10, 2022! Each new day brings new merchandise to Walt Disney World, and we know you don’t want to miss a thing, so we gather new releases here. Today we visited Magic Kingdom, EPCOT, and Disney’s Hollywood Studios; let’s look at our discoveries.

We found these two folding fans in the Emporium at Magic Kingdom.

These fans fold up into these circular pouches.

The tag has instructions on folding the fan back up after you pop it out.

This one features Mickey and Minnie in front of a striped heart.

This fan features Winnie the Pooh with a pot of “hunny.”

This outfit includes a denim shirt and tulle skirt.

The pocket of the shirt has three hearts on it, with Minnie peeking out.

Her bow is embroidered at the corner of the shirt.

It buttons up and ties at the bottom.

The skirt is pink with polka dots.

It was in the Emporium.

This PopSockets set was in Tomorrowland Light & Power Co.

Each grip is an iridescent color with sparkles.

The other features his ax, Stormbreaker.

Instructions for installing and using the grips are on the back.

We found this Spider-Man ball cap at Star Traders in Magic Kingdom.

The front is red with black webbing, just like Spidey’s suit. His eyes are on the top, and his spider logo is on the brim.

The back of the hat is blue.

“Go-webs-go!” is in a speech bubble on one side.

We found this “Coco” hoodie at Plaza del Sol Caribe Bazaar in Adventureland.

It’s black with the “Coco” logo embroidered on the front.

It has an all-over pattern of “Coco” imagery and characters.

This mug was in Creations Shop at EPCOT.

It features Belle in different outfits and scenes from “Beauty and the Beast.”

The mug itself is white and pink.

“30th Anniversary” is printed in gold inside the mug for the film’s 30th anniversary.

We found this third folding fan in Creations Shop.

It is blue and features Mickey.

“Happy” is repeated three times in the background.

These socks were also in Creations Shop.

They are grey with rainbows and Mickey heads patterned over them.

We found some Minnie Mouse luggage with the youth apparel in Creations Shop.

This suitcase is black with red and white polka dots. “Best Day Ever!” is embroidered in silver on the front.

Minnie is pictured with several different versions of her classic bow.

It has a red handle.

Kids can match their new Minnie suitcase with this Minnie bomber jacket.

It’s black, with red around the collar and white sleeves.

Minnie’s head and “Walt Disney World” are on the front left.

“Be Bold” is on the back in red letters with a Minnie bow.

We found this new bowl and the plates below at Il Bel Cristallo.

It also says “Topolino” and “Topolina,” which are Mickey and Minnie’s Italian names.

There are four plates in this set, wrapped in a canvas ribbon. The top plate features Minnie Mouse.

The other three plates are pictured on the tag. Two feature just Mickey in front of Italy landmarks, while the third has Mickey and Minnie.

This black tote says “Dreaming of Paris” in pink script over the Eiffel Tower.

Marie from “The Aristocats” sits in front of the tower.

This tote was in Les Halles at the France Pavilion.

Over at Disney’s Hollywood Studios, we found this bucket hat in Celebrity 5 & 10. It’s red and has Mickey’s face on the front.

It is supposed to provide UVB protection from the sun.