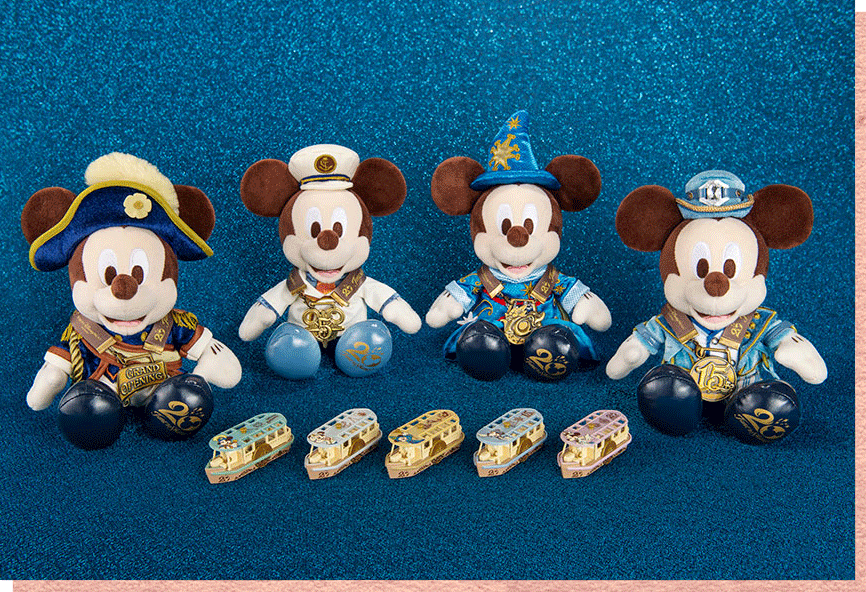 Tokyo DisneySea’s 20th Anniversary isn’t over just yet, and a new addition to the nostalgia-focused collection of merchandise has been announced with Mickey plushes donning anniversary costumes in muted colors coming May 10!

Come sail away to the first few years of Tokyo DisneySea. At the beginning, Mickey Mouse donned the iconic Admiral Mickey look, featuring a blue coat and an blue bicorn with a green feather. He also bears a special “Grand Opening” medal for this plush. This was his official park costume through the park’s 5th Anniversary in 2006.

We’re sailing free on a sea of dreams with this classic look for Mickey. Still used as his official park costume to this day, Cruise Director Mickey boasts a captain’s cap, a white jacket with a sky blue undershirt, royal blue pants, and sky blue shoes. He also wears a medal of the 5th Anniversary logo.

It’s bound to be magical with Mickey’s 10th Anniversary “Be Magical!” look. The theme for the anniversary celebration was quickly altered to this look after the 2011 Great East Japan Earthquake, making Mickey’s outfit a very blue reimagining of his iconic “Fantasia” outfit to match the debut of “Fantasmic!” the same year. As with the others, he also bears a medal with the 10th Anniversary “Be Magical!” logo.

Last but not least, the crystals are calling with the 15th Anniversary “The Year of Wishes” look for Mickey. The very blue and white outfit features a sailor cap with a white crystal at the front (each of the characters had a special color for this celebration), a multi-tone blue jacket over a white vest, and blue and white pinstripe pants.

All four of these will be available in Emporio starting May 10, and a Standby Pass will be required for admission. Are you excited to bring home Mickey’s classic anniversary costumes? Let us know in the comments below!