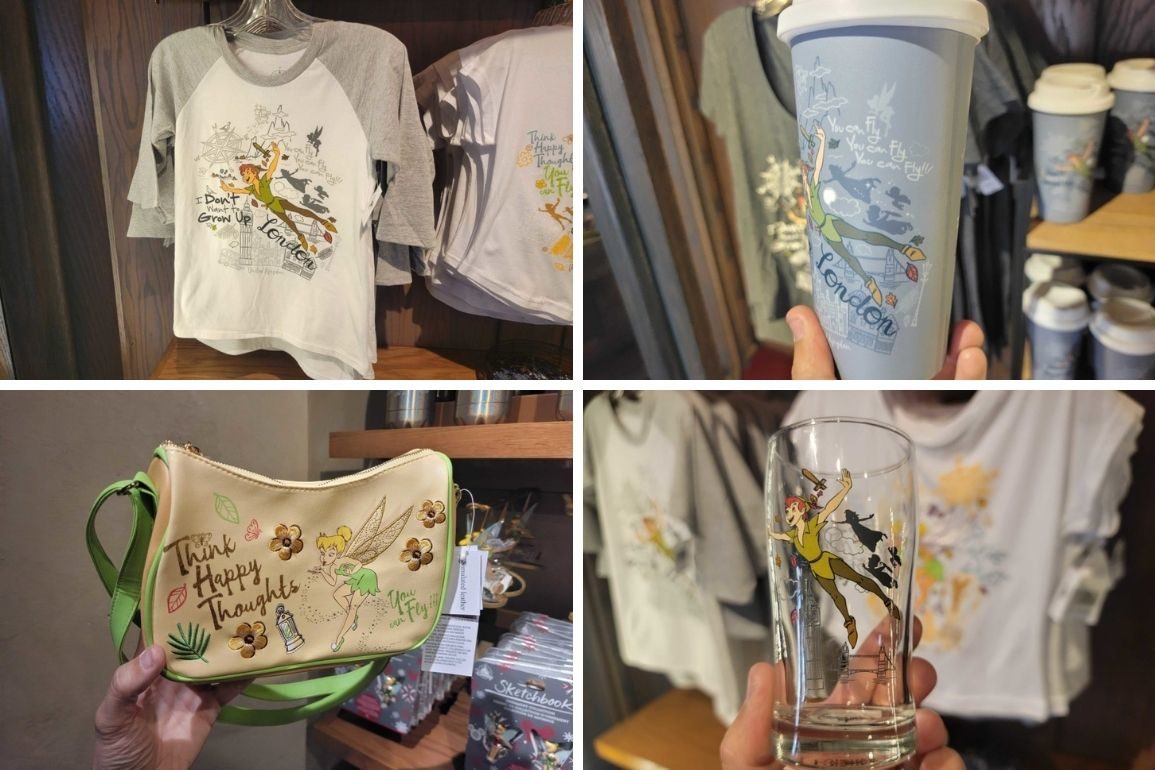 Some of the new “Peter Pan” merchandise from the U.K. pavilion in EPCOT has flown over to Disneyland Resort. We found it in the new Merlin’s Marvelous Miscellany shop.

This yellow shirt features a large image of Tink blowing pixie dust. Around her are images of a compass, Tower Bridge, mountains, and the silhouettes of Peter, Wendy, Michael, and John.

It says “United Kingdom,” “Think happy thoughts and you can fly,” and “Pixie Dust.”

The shoulders are grey.

On the front, it says, “My favorite color is sparkle,” in large neon green, black, and white lettering. An outline of Tink is next to the lettering, with a sparkling line of pixie dust.

This yellow blouse features a large image of Tink blowing pixie dust onto outlines of Peter, Wendy, John, and Michael. “Tink” is in large gold lettering with “United Kingdom” at the bottom in white lettering.

This yellow magnet is an outline of the same Tinker Bell design featured on the crewneck.

This gray water bottle sparkles in the sun, as if adorned with pixie dust.

The design on the front says, “My favorite color is sparkle” in green and black.

Tink’s silhouette is in a keyhole next to the words. There’s also a compass and U.K. buildings.

This clear glass features Tink blowing pixie dust with Neverland mountains behind her.

It says “United Kingdom” in red lettering over the outline of Tower Bridge.

This matching Tinker Bell purse is beige with green lining. It has an image of Tink blowing pixie dust, surrounded by “Think happy thoughts,” “You can fly!!!,” flowers, leaves, and butterflies.

It says “United Kingdom” on the other side in gray lettering.

This blue magnet is an outline of the Peter Pan design on some of the items below. It features Peter flying over London, with Neverland in the background and the words “London,” “I don’t want to grow up,” and “You can fly.”

This white youth tee has the same familiar Tinker Bell design in yellow, grey, and green.

This raglan t-shirt is white with gray sleeves and a gray collar. It has the same Peter Pan pattern as the magnet on the front, mostly in grey except for Peter and a few leaves, which are in full color.

This Peter Pan t-shirt is gray with “Believe You Can Fly” in large red and blue lettering on the front. Next to the lettering are outlines of Peter Pan and Tinker Bell. It says “United Kingdom” in cursive lettering under Peter.

This Peter Pan blouse is a darker hue of gray. On the front, Peter Pan is flying over a London sky. He is surrounded by some of his classic phrases and icons of the United Kingdom.

There is also a travel tumbler featuring the Peter Pan design.

It is a light blue color with an off-white lid.

The ornament features Peter flying over Big Ben and parliament. “London” and “I don’t want to grow up” are painted on the base.

This cap is a couple of shades of gray, with Peter Pan embroidered on the front, flying over London.

Under the brim is a green silhouette of Peter with the words “Believe you can fly.”

This mug is not technically part of the U.K. collection but was also released at Walt Disney World first.

It’s white with the characters of “Peter Pan” flying across one side. The handle and bottom are green.

“Second star to the right and straight on till morning” is in green script on the other side.

The inside is green.