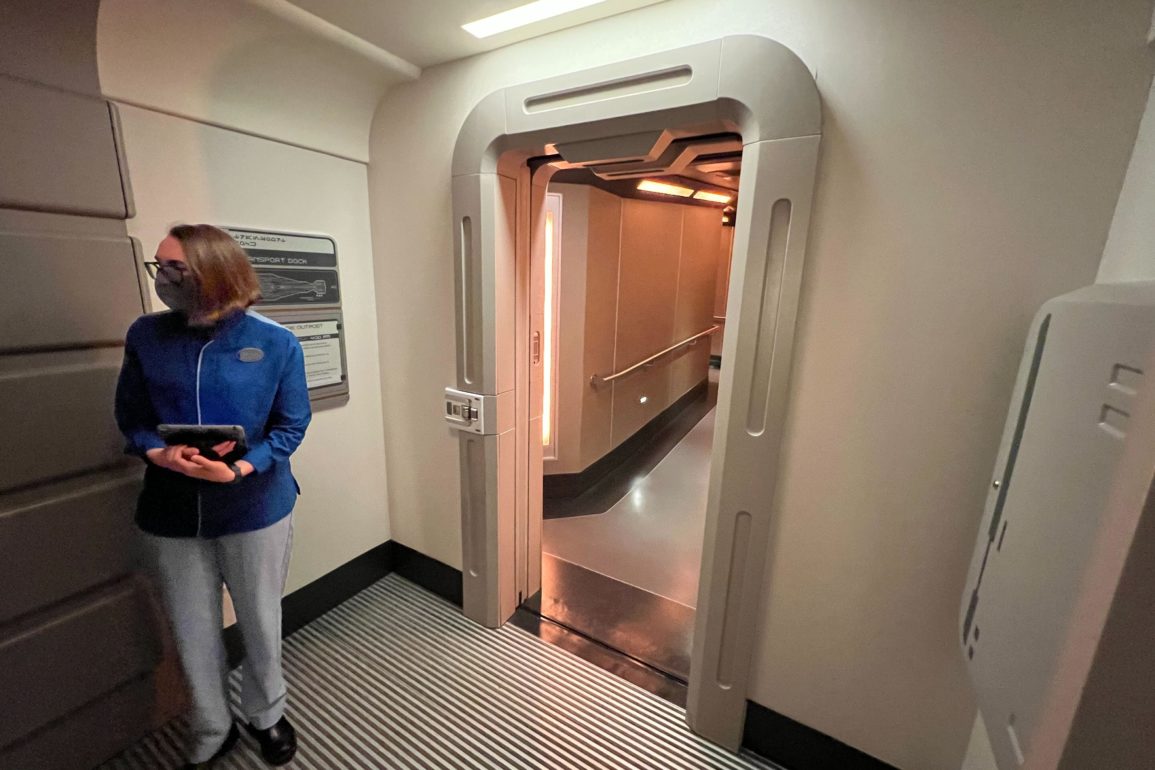 See the Full Experience on the Box Truck Shuttle to Batuu from the Star Wars: Galactic Starcruiser

Good morning from day 2 aboard the Star Wars: Galactic Starcruiser! We’re headed to Batuu on the box truck shuttle from the Halcyon. This article will contain spoilers for the full experience.

From within the Halcyon, guests are directed to the Transport Dock. Guests head down a long hallway to the shuttle doors.

A map shows where on the ship you are located, and a small placard spells out the rules for the shuttle. All guests must return by the final shuttle time of 4:00 p.m. We asked what happens if you don’t make it, but crew members would only say we would be stranded on Batuu. In reality, we expect that Cast Members will arrange a bus or other transportation back to the Starcruiser.

The touchpoint here is for tapping your MagicBand to mark your location so crew members can track who is on the ship and who is on Batuu.

As it is public transportation on property, the masking guidelines apply while aboard the shuttle.

A special pin, the Halcyon Sigil of the Select, is given to travelers heading to Batuu.

The shuttle interior is heavily themed, with lights and effects on all sides. It’s also very small and feels crowded.

The door slides closed, revealing that it is also themed.

There are plenty of screens and displays scattered around the cabin.

The transport is captained by J6-F8, a droid pilot who is heard only through the speakers and invites passengers to “sit back, relax, and enjoy the ride.” J6 also gives advice on places of interest in Black Spire Outpost as they travel to the planet.

Though he is unseen, a placard near the front of the transport features a picture of J6-F8. The placard reads:

The cabin features light effects in several of the grates around the transport as the shuttle passes various other ships, unseen outside.

After exiting the transport shuttle, guests enter a hallway that is open-air, giving them a taste of sunshine for the first time since entering the Halcyon.

Oga has pasted her advertisement over the information board. It includes a map of how to reach her cantina.

The hallway is themed in the same style as the rest of Black Spire Outpost, with the heavily aged concrete and faded paint.

Wires and other equipment line the top of the walls and span the gap of the hallway.

Rounding a corner at the end of the hallway, guests are directed out into a large, covered space inside Docking Bay 3.

Here, at the entrance to the Outpost, travelers are met by their personal concierge while planetside. He informed the guests of the offerings here on Batuu, including their Lightning Lane reservations for the attractions linked to their MagicBands, and their vouchers for lunch that can be redeemed at Docking Bay 7 Food and Cargo or Ronto Roasters (or any quick service at Disney’s Hollywood Studios). Purchases made in Black Spire Outpost can be held at Docking Bay 3 by the concierge and transported back to the guests’ cabins aboard the Halcyon later in the day.

Take a look at our full flight down to Batuu on our YouTube channel, or by clicking the video below.