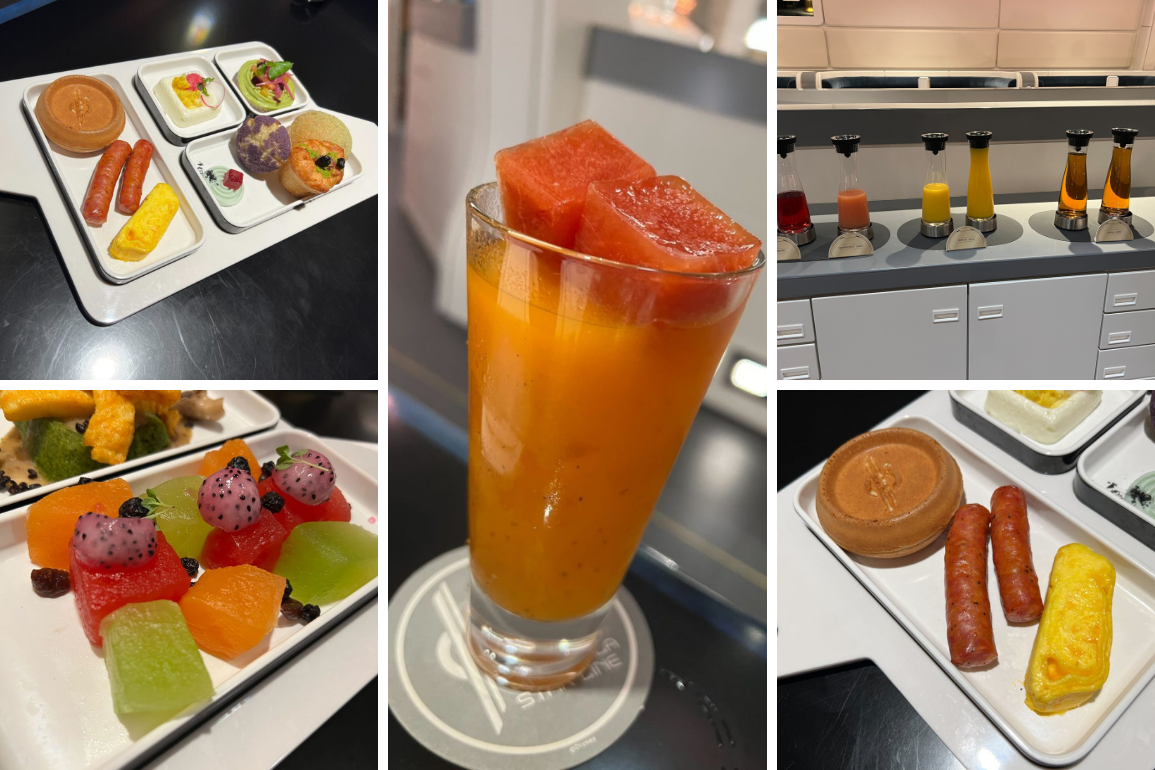 Bright suns! We’re up early this morning after an exciting evening and we stopped into the Crown of Corellia Dining Room to enjoy the breakfast buffet before catching our transport shuttle to Batuu. Like yesterday’s lunch buffet, all the dishes are available on small plates and you can fill your tray at your leisure.

An obvious attempt to make something look vaguely space-themed. The watermelon had a weird, minty taste. The other fruits were not sweet, but we wouldn’t expect them to be in March. The dried fruits on top were blueberries, which were a nice, sweet accompaniment. The dragonfruit jelly was weird and not very flavorful.

The muffin was good, with a crispy top instead of the typical sticky top you usually get. The croissant was surprisingly good, crunchy on the top with a tasty tart berry filling. The sweet bun was literally just a dinner roll sprinkled with green sugar. The accompanying blue milk butter was a very light and airy whipped affair, with a consistency more like thick whipped cream than a buttery spread. Not a buttery taste either, mostly nondescript. The strawberry jelly cube on top was good. It was compressed into a dense cube similar to jelly candies.

Avocados are called “green pearberries” in the Star Wars universe.

The avocado mash was too thin with not much substance to it; we would have liked it better if it was heartier. It also seemed like it was overly blended; the texture was homogenous with no bits of avocado like you might expect. The toast wasn’t actually toasted at all, it was a circle of untoasted wheat bread. It made it hard to cut and floppy. The dish would have been much better toasted.

The waffle is also available by itself if you don’t want the sides.

Small cups of maple syrup are available next to the waffles.

The rolled omelet is a great, unique way to eat eggs instead of the ubiquitous runny scrambled eggs usually found on buffets. The sausage is smoked and very good. We were amazed at the freshness of the waffle, which uses the same batter as classic Mickey waffles.

This was surprisingly good. The sausage gravy is predominant; we wouldn’t have even known there was kale in it if not for the sign. The egg “worms” were fine. They are imitation eggs but tasted like the egg from the omelet. We’re not sure what the porridge was made of, but it was pressed into a mold and held its shape well. The mushrooms are very good and make for a great complement to the dish.

This was pretty bad. It was cold (we think intentionally, but it wasn’t a good thing). It’s basically your flavorless egg white type of dish with some things on top to try and add flavor. Hard pass.

Your typical Disney buffet eggs. Maybe the most normal comfort food you’ll get on the whole trip.

The base is a baked circle of shredded hash brown potatoes with herbs, and was decent. However, the egg was pretty bad. It’s advertised as cheddar but we didn’t taste it, and it was really mushy with a terrible texture in the mouth. The scrambled eggs on the buffet were better. The applefruit on top was a rosette made with a strip of bacon sliced in half lengthwise. A good maple bacon flavor, better than typical buffet bacon. The sauce was a kind of spiced hollandaise, it added a nice piquant touch to the potatoes. It’s a shame the eggs were bad because the rest of the dish was good.

Blue and Green Milk on Tap

Espresso, cappuccino, and lattes are available on request (you can order spiked versions as well at an additional cost).

This wasn’t particularly special, and with the exception of the cubes, not an interesting presentation either. If you must have a Bloody Mary with breakfast, it will fill the need but otherwise, this isn’t worth getting.

The peach is strong with this one. Really nice fruity flavor, but the bourbon still comes through as the base for this beverage. The orgeat adds just a hint of almond flavor, and the bubbles give only a bit of fizz that gives the drink an unexpected mouthfeel. The garnish is a very thin slice of dehydrated pineapple with a Luxardo cherry. This is the most expensive drink on the menu (we’re not sure why) but very tasty.

Very alcoholic. Mostly lime and vodka, the herbaceous orange liquor gives a very herbaceous flavor but not much orange. The peppercorns were actually just ground pepper (and very little of it). Did not impart anything to the flavor. Overall, it was ok, but we wouldn’t order it again.

Looking for your favorite drink? A note at the bottom of the menu says you just have to ask. In addition to a few selections of beer on tap, rum, vodka, whiskey, bourbon, gin, tequila, and vermouth are always stocked.

If you prefer to eat on the move, a grab-and-go breakfast is available in the Sublight Lounge on Deck 4.

Decaf and regular coffee can be found here with to-go cups.

The to-go boxes have pastries and Palmfruit Yogurt inside.

The boxes have a Chandrila Star Line sticker keeping them closed.

The pastries are similar to those you would get at the buffet breakfast.

This is a thick Greek-style yogurt. It’s rather sour and doesn’t have much flavor. It would have been good if it was at least vanilla. The fresh berries and granola on top were good and a welcome change from the compressed or freeze-dried fruit we had all trip.

On the good side, they didn’t try too hard to be weird with the food, and that was the redeeming feature. The inventive dishes like the kale porridge were surprisingly good. Disney buffet fans will not like the lack of bacon or standard breakfast sausage, but the egg options are quite good and the waffle is a great familiar favorite. Most guests are gonna make this a quick meal in order to get to Batuu, and it’s easy to get in and get out quickly.