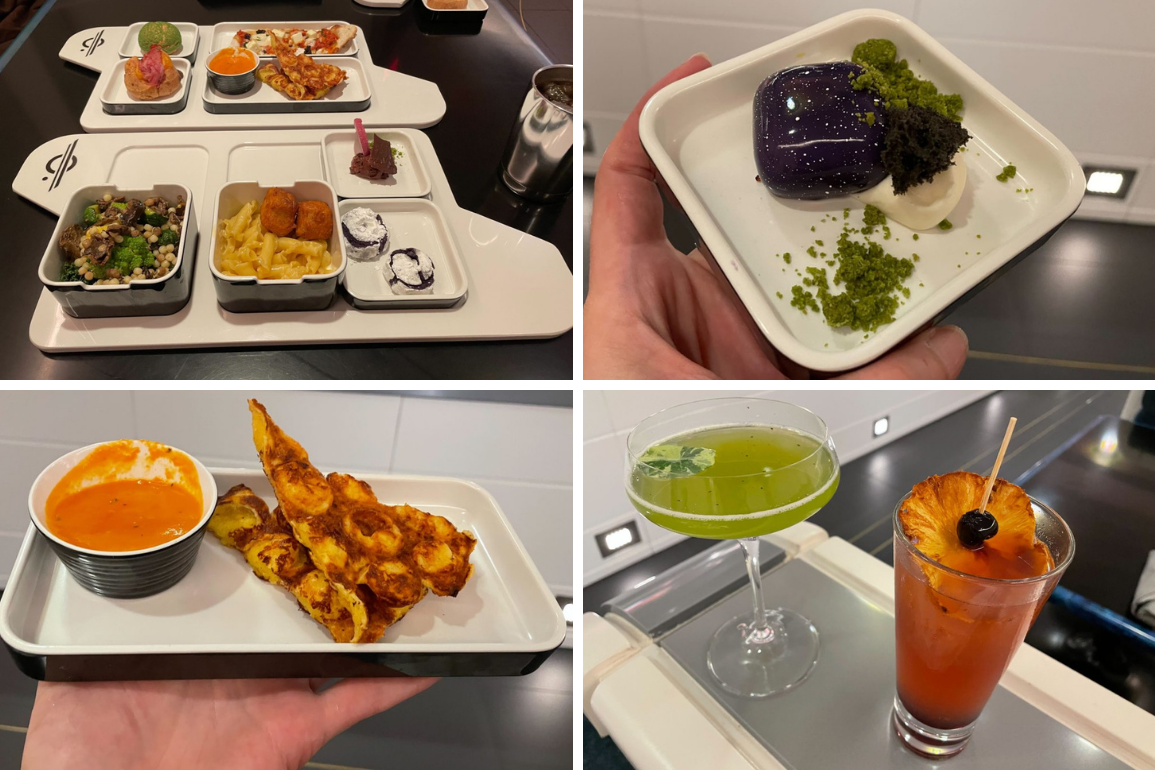 We checked in for the first official voyage of the Star Wars: Galactic Starcruiser and headed for the lunch buffet in the Crown of Corellia Dining Room.

Each dish is plated in modular dishware. The trays, decorated with the Chandrila Star Line emblem, have square and rectangular spots to hold your selections.

Several items are “Chandrilan,” implying that the dish or ingredient originates from the Chandrila Star Line’s homeworld.

This is a pretty basic Caesar-style salad. The lettuce is a little wilted, and the Parmesan disk wasn’t super crunchy.

The dressing is creamy and similar to a Caesar, but sweeter. The quinoa adds a nice texture and appearance but doesn’t add anything in the way of flavor.

The croutons are cornbread and also complement the sweetness of the dressing.

The Chandrilan Salad is plump toasted pearl pasta with kale, mushrooms, zucchini, and a broccoli-cauliflower hybrid.

The kale is very crisp and doesn’t soften up in the dressing. The vinegar dressing is pretty strong and just a bit too heavy of a vinegar for the dish.

The menu card says olives, but there were none in our servings.

“Red fruit” is the name for tomatoes in the Star Wars universe.

This was like a grilled cheese made in a bubble waffle maker. But the bread was odd, and the cheese was baked in. So you get a cheesy flavor, but not a gooey grilled cheese like you’d expect. It wasn’t bad, but it wasn’t our favorite.

The tomato soup dipping sauce was a nice touch, quite tasty even for someone that doesn’t like tomato soup. This dish will likely go over well with kids and picky eaters.

The “crawlfish” are regular crawfish, borrowing the name for the crustaceans found on the planet Sorgan. Sorgan was introduced in “The Mandalorian.”

Sorgan’s Stew was similar to an etouffee, with chunks of crawfish in a tangy tomato-based gravy with black rice. The bread crisp is cornbread, similar to the croutons on the greens.

The crawfish is a little chewy, but overall this is a decent dish. An interesting southern vibe on this dish in space.

The puff is exactly like Brazilian cheese bread, but the cheese is definitely cheddar. There’s a thin slice of deli ham shoved in there.

It’s a great option for kids, but adults will enjoy it too, especially for the less adventurous eaters.

There’s a light buttery sauce on the veggies and a crumbly topping that we can’t quite identify, but added an odd spice that we’re not sure we liked.

This smelled terrible, like fish food. The nori crust was excessive and was the downfall of the dish.

The green rice that accompanied the salmon was undercooked and flavorless.

The salmon itself was cooked well done, but still juicy. It could be great with just a dusting of the nori.

The sign advertises this as having Tip Yip chicken, but ours had no chicken on it.

This has a great crust. It looks like a flatbread, but it’s puffy and chewy. The tomato sauce has a hint of tikka masala spice. The paneer cheese cubes are great, but a bit odd on top of the mozzarella. Overall, this is a solid option.

Visitors to Batuu will be familiar with Tip Yip Chicken from Docking Bay 7 Food & Cargo. The Tip Yip is a breed of chicken local to Endor (the forest moon home of the Ewoks, as seen in “Return of the Jedi”).

This has nugget-sized versions of the same dense chicken with a batter breading. The noodles are a bit soggy. The cheese is a pretty mild flavor.

This is the way to go if you are intimidated by some of the other items (or have picky kids!).

We thought it would be like a cream puff, but it’s a thin, hard shell. It cracked when we tried to break it.

That being said, it was actually very tasty. A huge step up from an Uncrustable. It’s very full of sunflower butter and jelly.

A really rich, strong dark chocolate flavor with hibiscus that adds a berry note. The green crumbles have a light matcha flavor.

The hibiscus-flavored disc has a crisp meringue consistency.

This dessert has a very potent, but delicious, flavor.

A solid offering filled with a sweet, berry mousse.

The texture on the outside is that of a macaron, while the inside is nice and chewy. It’s quite good, as are all of the desserts.

Blue and Green Milk on Tap

Complimentary espresso, cappuccino, and lattes are available on request (you can order spiked versions as well at an additional cost).

Looking for your favorite drink? A note at the bottom of the menu says you just have to ask. In addition to a few selections of beer on tap, rum, vodka, whiskey, bourbon, gin, tequila, and vermouth are always stocked.

We tried two of the specialty cocktails at lunch today, but fear not — we will be trying every cocktail, both alcoholic and non-alcoholic, on our voyage. Stay tuned for more reviews!

The peach is strong with this one. Really nice fruity flavor, but the bourbon still comes through as the base for this beverage. The orgeat adds just a hint of almond flavor, and the bubbles give only a bit of fizz that gives the drink an unexpected mouthfeel. The garnish is a very thin slice of dehydrated pineapple with a Luxardo cherry. This is the most expensive drink on the menu (we’re not sure why) but very tasty.

Very alcoholic. Mostly lime and vodka, the herbaceous orange liquor gives a very herbaceous flavor but not much orange. The peppercorns were actually just ground pepper (and very little of it). Did not impart anything to the flavor. Overall, it was ok, but we wouldn’t order it again.

This wasn’t up to the quality we would have expected, given the price of the experience. The buffets on the Disney Cruise Line are better. Some of the more inventive things (salmon, crawfish, vegetables) just weren’t good, and the less inventive things (salad, pizza, desserts) were just average.

Next
FULL TOUR of a Standard Cabin Room on the Star Wars: Galactic Starcruiser