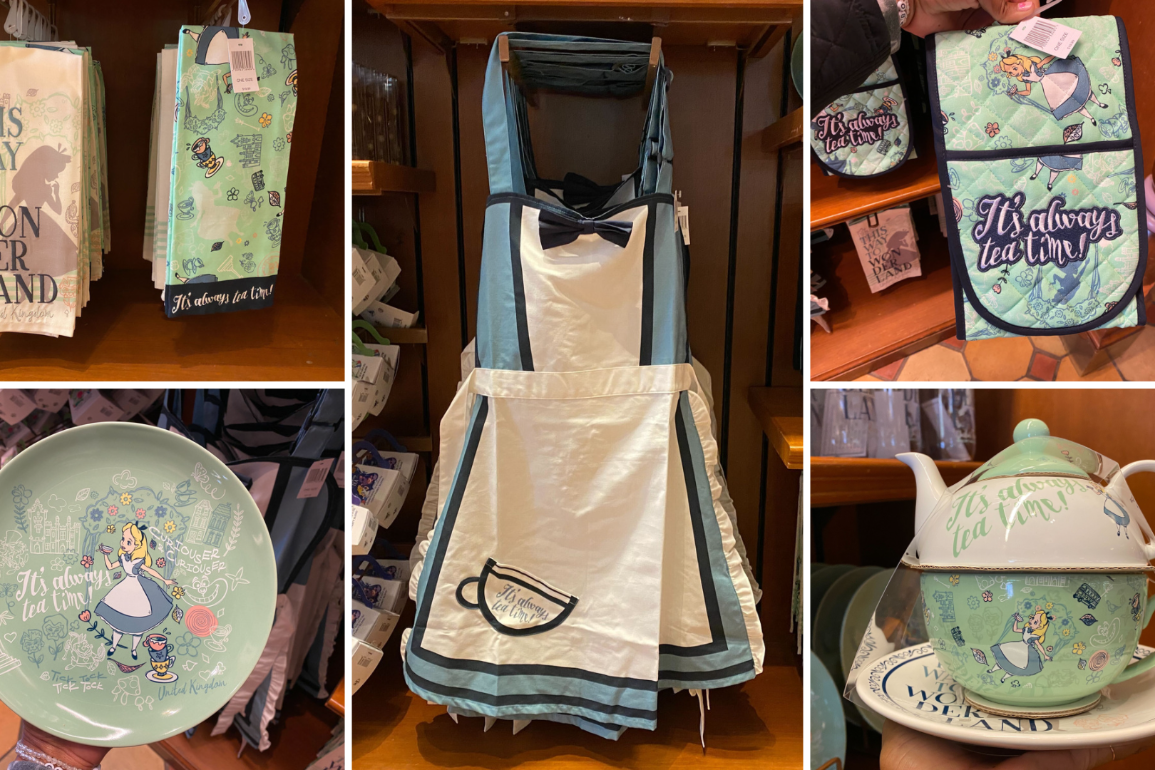 Some of the “Alice in Wonderland” merchandise collection from the U.K. Pavilion of EPCOT has arrived at Disneyland Resort. We found this kitchenware in Julius Katz & Sons at Disney California Adventure.

This apron resembles Alice’s classic blue dress and white pinafore, with a black bow at the neckline.

This small glass has Alice standing under a flowery trellis on one side.

She’s drinking from a pink teacup.

The other side reads “United Kingdom” over some brownstones.

There are two towels in this set.

One is green with an all-over pattern of Alice, U.K. icons, and Wonderland imagery.

There is the Chesire Cat’s face, a stack of teacups, lampposts, flowers, and pigeons.

“It’s always tea time!” is at the bottom of the towel.

The other towel is off-white, embroidered with “This way to Wonderland” and “United Kingdom.”

Alice’s silhouette is in the background with a trellis and U.K. buildings.

The outer edges are black.

Alice appears with the trellis and teacups. It’s also patterned with U.K. icons like a double-decker bus and Wonderland imagery like mushrooms.

This green plate features Alice drinking tea in the center. There are U.K. buildings, the White Rabbit, and the Mad Hatter in the background.

This transparent water bottle has Alice’s silhouette in white on one side with the words “This way to Wonderland.”

This stacked set includes a giant teacup, plate, and teapot.

It’s white and green, with all the same images and phrases from the other merchandise in the collection.

Will you be hosting a tea party using this new collection? Let us know in the comments.