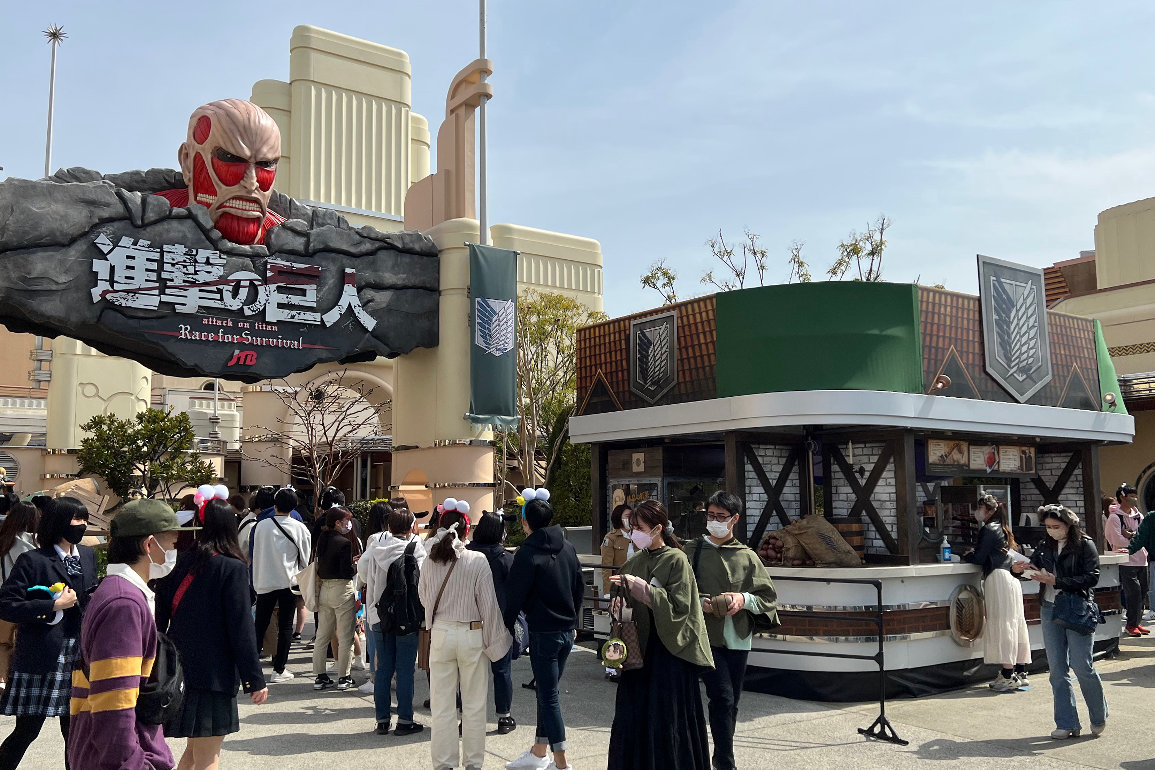 This is the moment you’ve been waiting for! Behind these gates are dreams, the lights, and unforgettable encounters. The best day in the world is waiting for all of us at Universal Studios Japan, so naturally we thought it’d be fun to check in on the world’s most popular Universal park and see the latest happenings. Let’s go!

Getting to Universal Studios Japan from the center of Osaka is actually pretty easy, it’s located just off the Osaka Loop Line, which circles the heart of the city. Typically, you need to transfer trains, although direct trains to Universal City Station run from Osaka Station in the mornings and evenings.

As we repoted last year, trains featuring a Super Nintendo World wrap are also running on the Osaka Loop Line and the Yumesaki Line, which is home to Universal Studios Japan. We caught one going the opposite direction as we waited at Nishikujo Station for our train to Universal City.

After a brief stroll through CityWalk, we made it to the park! We’re in the closing days of the 20th Anniversary “NO LIMIT! celebration, so these Mario banners and medal will be coming down soon enough.

We got to say hello to Woody and Winnie in their 20th Anniversary costumes one last time on our way into the park.

Previously home to Wizarding World of Harry Potter merchandise and then briefly some Snoopy stuff for the holidays, Beverly Hills Gifts now plays host to a small selection of Universal Cool Japan 2022 merchandise.

These Mario banners under the canopy and along Hollywood Boulevard likely aren’t long for this world either.

Hunter × Hunter The Real 4D features the iconic characters from the anime of the (mostly) same name and an original story with Gon, Killua, and Kurapika, the series’ protagonists, infiltrating a mafia auction before facing off with series antagonist Hisoka, a mysterious and deadly transmuter. This show plays in the afternoons.

Meanwhile in the morning, guests can enjoy Pretty Guardian Sailor Moon: The Miracle 4D Moon Palace Deluxe (quite a mouthful of a name there), which feature see Sailor Moon and the Sailor Scouts attending a dance with Tuxedo Mask, only to be interrupted by a new threat — a woman fused with a disco ball. It’s very confusing unless you’ve seen the anime, which I haven’t. But I did find it to be the more enjoyable of the two.

Sadly, one of our favorite coasters in the world, Hollywood Dream: The Ride, was down for its monthlong annual refurbishment for most of our visit. It finally reopened on our final day.

With Cool Japan kicking off at the park, we decided to stop off for a peach churro themed to “Monster Hunter”, which is currently part of the park in the form of the Monster Hunter XR Walk. It was rather disappointing, cold, and stale, as most Universal Studios Japan churros turn out to be.

Over at Beverly Hills Boulangerie, special cakes and drinks are available themed to the Cinema 4D tenant franchises.

And if you visit Studio Stars Restaurant, you’ll find several choices for Attack on Titan-themed meals. We had one of these on our final day, and it was surprisingly delicious if a bit expensive.

For the first chunk of March on weeknights, students at Universal Studios Japan could visit the park and bring their student ID to get a special extra hour to themselves to ride select attractions.

Inside of Stage 22, a banner held by Snoopy and Charlie Brown proudly declared “Alright, Universal Springtime!”.

We picked up a wristband and program for the event. Visiting students had the choice of riding the Attack on Titan XR Ride, Amazing Adventures of Spider-Man, Despicable Me: Minion Mayhem, The Flying Dinosaur, Jurassic Park: The Ride, Jaws, Harry Potter and the Forbidden Journey, and Flight of the Hippogriff. Super Nintendo World was not included in the lineup.

Speaking of the Attack on Titan XR Ride, it has made its triumphant return for a second year running, first playing during the ill-fated Cool Japan 2020 interrupted by the COVID-19 closure.

A new popcorn bucket featuring series protagonist Eren Yaeger has come to the stand outside the attraction in the hopes of emulating the wildly successful Nezuko popcorn bucket from last year’s Demon Slayer XR Ride overlay. We’re just over here wondering when Space Fantasy: The Ride will be back!

We tried some of the treats from that cart as well. First up was the Kid with a Death Wish Chocolate Churrito, which pretty much tasted like a regular chocolate churro but with the top half being cold because of the frosting. We’ve never been really sure why Universal Studios Japan’s food department is so dead set on these awful, stale, cold churros, but they keep making them. It’s their biggest culinary weakness by far.

Second up was the Mikasa Acker-man (it’s funnier if you know that buns in Japanese are called “man”), filled with miso chicken. This was actually quite excellent, and made for a great midday snack.

As always, Space Fantasy Station has been taken over by the franchise of the day currently occupying the attraction, with decorations and merchandise themed to Attack on Titan lining every single inch.

The exit gift shop to Terminator 2 3-D reopened this week, giving us a glimpse at the theater show’s glasses dropoff. We’ve actually checked in on this a couple of times since the show closed, and the glasses from the final performance (for now) in September 2020 have sat in these bins uncollected since. Quite fascinating.

For the release of “Sing 2” in Japan this month (entitled “Sing: Next Stage”, a new photo op has been installed outside Sing On Tour.

Sadly the games were shuttered along the boardwalk between New York and San Francisco as low crowds early in the weekend didn’t justify their opening.

Minion Park is decked out top to bottom in Easter decor, with eggs themed to Minions and “Despicable Me” characters alike spread throughout. Gru’s house is even covered in a few less-than-evil decorations themed to the springtime season!

With Backdraft still closed, it’s currently being used for the finale show of the park-wide Detective Conan scavenger hunt.

Meanwhile, a Detective Conan mystery restaurant has opened across the way at Lombard’s Landing.

Over in Amity, the Boardwalk games were open in this area today, seems only the San Francisco ones were closed.

Universal Wonderland’s entrance is back in the Easter spirit, with the Elmo, Hello Kitty, and Snoopy statues all receiving that special Easter touch.

We spent virtually an entire day at Super Nintendo World, in no small part thanks to the lines forming with higher spring break crowds. Seeing it both in the day and night is quite a contrast. Fortunately, most of the props on Mount Beanpole are finally working again. Although Yoshi was stationary the entire time we were there, the stacked Goombas are still missing after their fall last summer, and we still have yet to see the return of the Bullet Bill.

We end our visit with this lovely view across the lake from Jurassic Park, where we can see Hollywood, New York, and a bit of San Francisco. After visiting three Universal parks in the past year, this one is still our favorite.

What did you think of our visit to Universal Studios Japan? Let us know in the comments below!

Previous
BREAKING: Guardians of the Galaxy: Cosmic Rewind Opening May 27, 2022 at EPCOT