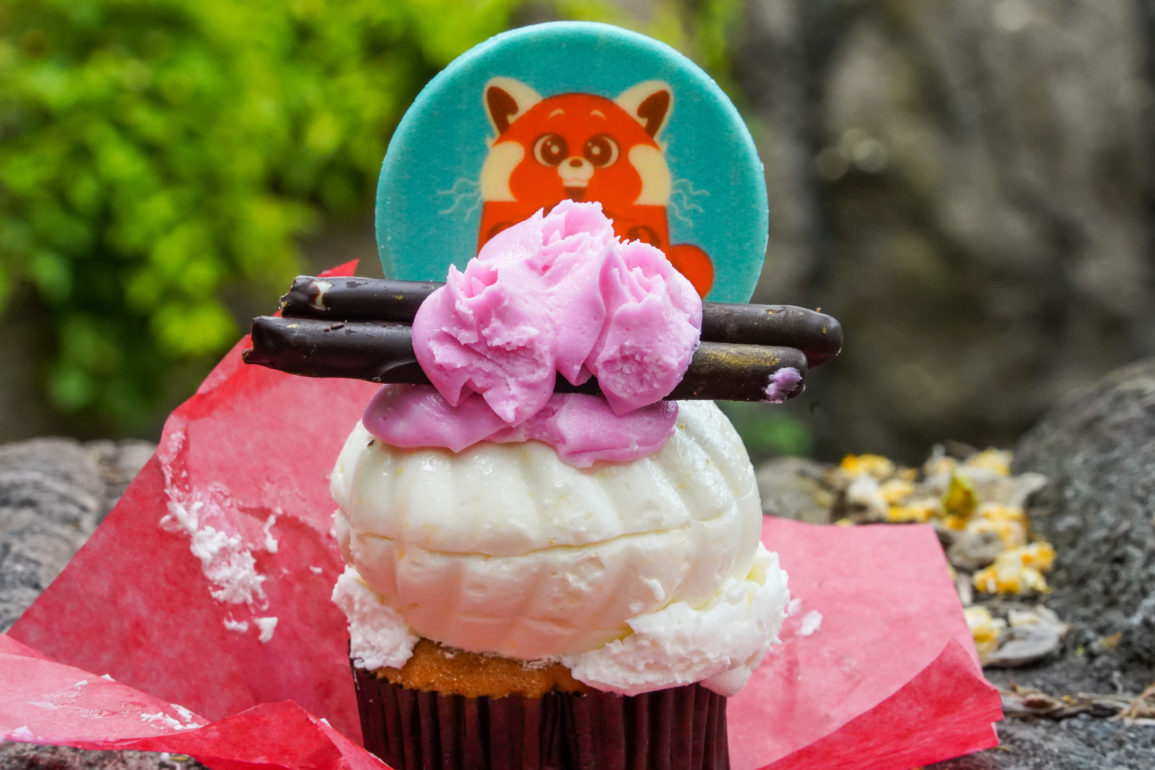 On our latest venture to Disney’s Animal Kingdom, we stopped by Pizzafari to try the delectable new pineapple and vanilla “Turning Red” cupcake. It’s also available at Flame Tree Barbecue and Restaurantosaurus.

Let’s get the negative out of the way first — this is, physically, an overly complex cupcake with multiple layers. It is tall, skinny, and top-heavy. True to its name, you will be “Turning Red” when it inevitably tips over.

The frustrations of eating it aside, it is a lovely treat. The bao bun layer of frosting is a fun thematic element, and the magnolia blossoms are beautiful. The overused printed white chocolate medallion takes away from the more upscale aesthetic and does nothing to help the flavor.

Despite the physical complexities, the taste is relatively simple but pleasantly so.

The vanilla cupcake is basic but soft and with a nice mild vanilla flavor.

The pineapple buttercream that makes up the bao is the star of the show. It’s thick and creamy with a very faint pineapple tone and adds a gentle taste of nutmeg and spice. It was an unexpected addition that balanced the cupcake nicely.

The dark chocolate for the chopsticks was a welcome change from milk chocolate, but like many such garnishes, they are best enjoyed as a separate chocolate treat.

The medallion, as mentioned, really adds nothing from a taste standpoint and is the same bland white chocolate used for many Disney cupcake medallions. Of course, it does add quite a bit of cuteness to the cupcake!

The pineapple compote is pretty basic, sweet with an intense fruit flavor.

Overall it’s a dessert with a good flavor, as long as you’re willing to put in the work.

Are you looking forward to trying this new “Turning Red” cupcake at Disney’s Animal Kingdom? Let us know in the comments.