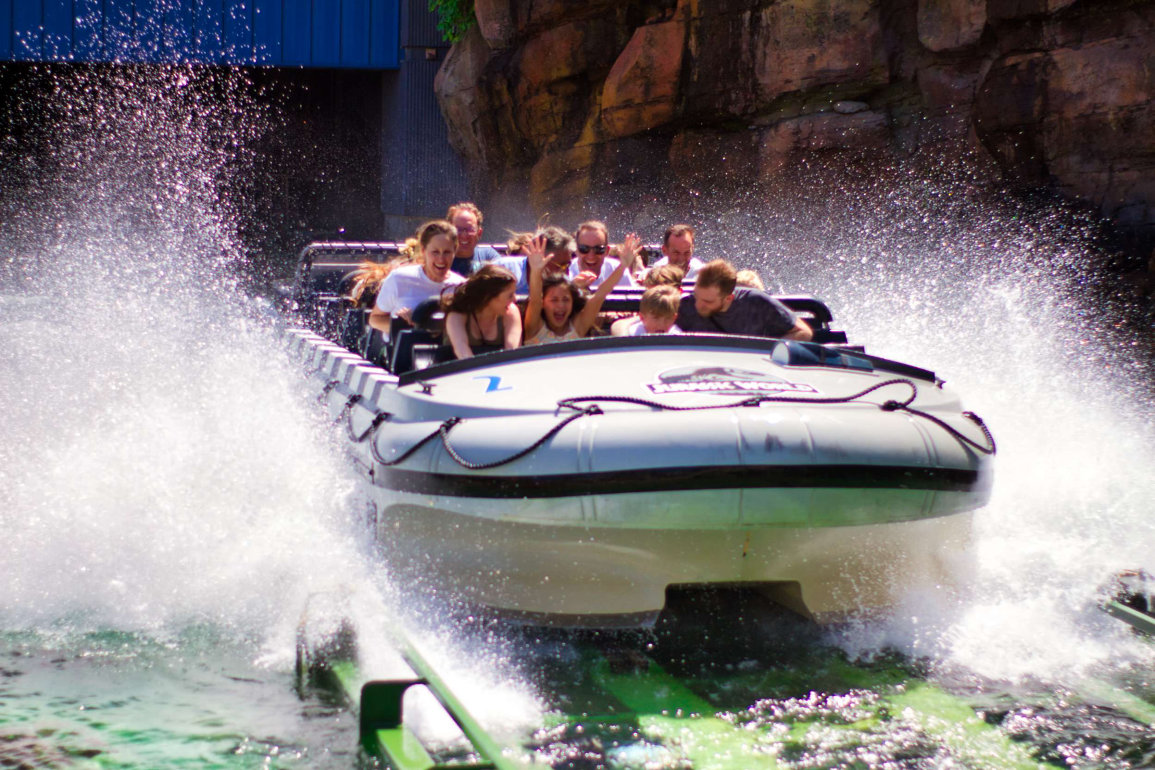 Toothsome Chocolate Emporium & Savory Feast Kitchen construction is still buzzing along. A large section of ground has been torn up as trenching continues.

And nearby at the Halloween Horror Nights construction area near the Curious George parking structure, it seems like painting is underway, as the wood panels are all being blackened.

The façade entrance is clearly becoming a traditional house, with slatted windows for a creepy vibe. Think you know what maze this will be? Let us know in the comments below.

Temperatures tipped up to 100° in parts of Southern California today, for the first time this year. It’s not that we can’t handle the heat, it just came out of nowhere and we were unprepared for full summer all at once. Let’s head into the park and find somewhere to cool off.

The Filmmakers statue at the entrance to the park is just beautiful, but the attention to detail is really amazing. See how the light creates a dotted line pattern inside the camera barndoors? This is from the sunlight shining through the hinges on the edge of the barndoors, exactly as it would on the real thing. This has been sculpted to recreate the exact same type of hinges used on this piece of equipment. Rather than just making it flat all the way across as could be expected for a statue, there are little gaps to preserve that authenticity. This park never ceases to amaze with little tidbits like that.

Inside the Studio Store, we found some cool new apparel featuring the Autobot symbol.

And some new drinkware pieces to join the Jurassic World line of tropical flora-inspired apparel and accessories.

For any fans of Hogwarts overall, we found a new water bottle, as seen above, and a t-shirt, as seen below. The shirt seems to match the sticky notes and folder set that we found last month.

We needed some more magic, so we hopped on a train to Hogsmeade to hit the pub and socialize.

In Hog’s Head pub, we noticed that a new Bungbarrel Spiced Mead is now available on draught.

We just had to give it a shot. Take a look at our full review right here.

And after a glass of fermented honey wine, we needed something solid. What better place to wash down your sweets than with more sweets from Lard Lad?

Don’t those just look delicious? How are we supposed to say no to that? With a belly full of fried dough and mead, we headed to the escalators to the Lower Lot (because there’s no way we’re taking the stairs after all that sugar, especially in this heat).

New electronic signs have been added to the Lower Lot archway.

The right side denotes the location of the handicap transportation entrance. One or both of these signs will likely be in use for governing entrance times to the upcoming Super Nintendo World when it opens next year.

Speaking of which, let’s take a look at the construction progress on that land. You can see our whole in-depth look at the progress right here.

These two are used to the heat of the sands of Egypt, so they aren’t sweating as much as we are.

This is more apt. Jurassic World’s jungle foliage and embedded misters provide some relief from the punishing sun, but we know the best way to cool off at Universal Studios Hollywood is on the ride itself.

After a brief encounter with the Indominus Rex, we were ready for that splashdown!