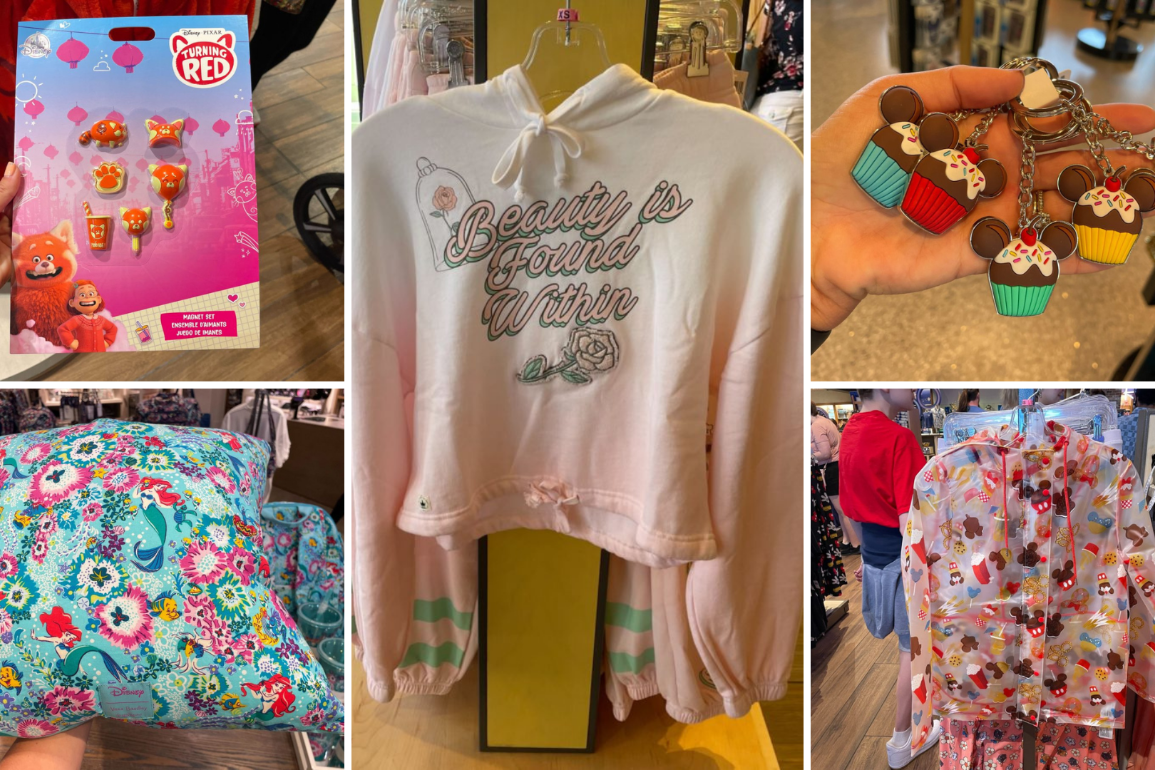 Welcome to the merchandise roundup for April 15, 2022! Each new day brings new merchandise to Walt Disney World, and we know you don’t want to miss a thing, so we gather new releases here. This week we visited EPCOT, Magic Kingdom, Disney’s Animal Kingdom, Disney Springs, Disney’s Art of Animation Resort, and Disney’s Contemporary Resort; let’s look at our discoveries.

New from the collaboration between Disney and Native are two styles of 50th anniversary shoes. So far, we’ve only seen the youth sizes around the parks.

This pair is dark blue with gold accents. The Disney x Native logo is on the front.

The shoes feature the 50th anniversary logo and Mickey in his special EARidescent outfit. We found these and the white versions below in the Emporium at Magic Kingdom.

The other style features Minnie in her 50th anniversary outfit. The shoes are white with sparkling gold.

Get “Fired up!” with this water bottle featuring Anger from “Inside Out.”

The bottle is teal blue, with Anger pictured with an orange flame around his head. “Fired up!” is beneath him.

He’s pictured three more times on the other side of the bottle.

It has an orange cap and includes a straw.

This was in the Creations Shop at EPCOT. We also found this water bottle at Disneyland.

This heather grey youth shirt features C-3PO and R2-D2 peeking into a cavern.

This shirt is sensory-friendly, meaning it has flat seams, tear-away tags, and is extra soft. We found it in the Creations Shop.

We had previously only seen this jacket at Disneyland.

The buttons read “let your power shine,” with an image of a crescent moon and a crown.

Embroidered on the collar is a lantern from “Tangled.” A rainbow button is on one of the breast pockets.

Rapunzel’s tower is embroidered in pink-purple on one arm.

Another crescent moon and “let your power shine” are embroidered on the back.

This was also in Creations Shop.

This pajama set is grey, with Disney Princess icons featured down one side of the front of the shirt.

The other side of the shirt reads “A land far away.”

The symbols on the front and sleeve include a diamond (Snow White), Aurora’s crown, a fork (Ariel), Genie’s lamp (Jasmine), a bear (Merida), Cinderella’s gown, and a rose (Belle).

This was in Creations Shop.

This shirt is light blue with Mickey on the front.

Across Mickey is the word “Happy” three times in white lettering. “Walt Disney World” is at the bottom of the design.

This was also in Creations Shop.

This yellow shirt reads, “Being together is magical.”

“Magical” is spelled out in rainbow letters, with the silhouette of Cinderella Castle replacing the second “A” and a rainbow behind it.

These blue pants have an all-over print of different iterations of Mickey.

The Mickeys are in black, grey, red, and dark blue. The waist has a red drawstring.

Recognizable Mickeys include Sorcerer Mickey and him driving Steamboat Willie.

The pants have pockets.

This set includes five Mickey cupcake keychains. Each resembles a chocolate cupcake with Mickey ears, white icing, sprinkles, and a cherry on top.

They each have a different-colored cupcake liner, though.

The colors are blue, pink, green, yellow, and red.

This mug is white with a Mickey head on one side. It has a golden handle.

The rim is also gold, and the inside is light blue.

“Enjoy” is on the other side of the mug. This was available in the Creations Shop.

This throw pillow has been added to “The Little Mermaid” collection available online at the Vera Bradley store in Disney Springs.

The front is seafoam green with the silhouette of Ariel made out of patterned fabric featuring Sebastian, Flounder, and other fish from the film.

The other side of the pillow is made of the same fabric, with the pattern all over.

Ariel herself can be seen in full color on this side.

Also added to the collection are these Jibbitz charms for Crocs shoes.

The charms are of Ariel, Flounder, Sebastian, flowers, and a seashell.

Instructions for the charms are on the back.

Over at World of Disney in Disney Springs, we found this “Turning Red” costume bathrobe.

It’s inspired by Meilin’s red panda form, complete with her face on the hood.

It has two pockets on the front.

Mei’s striped tail is flat on the back.

This magnet set was also at World of Disney.

World of Disney also had this scrumptious “Hunny” cardholder.

The clasp on the front is shaped like a honey pot with some yellow honey dripping out of it.

The pleather underneath is honeycomb-patterned, with Pooh’s face, bees, and more honey pots. The secondary pleather color is solid blue.

There are four card slots on this side.

The other side has one card slot.

The transparent plastic has drips of honey and a bee pictured on it.

A matching dog leash (or lead) and collar are included in this set.

They are both blue, with yellow plastic materials.

A Mickey ear hat is featured on the collar buckle.

The collar is patterned with Mickey’s face.

The leash reads “Feeling Gooood” with Mickey’s head in place of an “o.”

This is an update to a snack-themed raincoat released at Walt Disney World a few years ago.

The treats are larger than they were on the previous version of the coat.

It includes pockets and a hood with a red drawstring.

This was at World of Disney at Disney Springs.

These blue lounge shorts feature Mickey on one leg.

He’s smiling with his hands on his hips.

The shorts have pockets and a drawstring waist.

These and the shorts below were in World of Disney.

These shorts are patterned all over with Minnie and tropical flowers.

The flowers are pink, blue, and yellow.

Don’t worry, be happy with this youth shirt also available at World of Disney.

Minnie is sitting on a rainbow on the front, under the words “be happy.”

Mickey is on the other end of the rainbow on the back.

This hoodie is part of the same new Princess Collection as the “Tangled” denim jacket. It reads “beauty is found within” against a slight ombre of pink.

The Enchanted Rose is printed behind the words, and another rose is embroidered beneath them.

It has a drawstring waist and hood.

It matches these princess pants (below). We found both in DisneyStyle at Disney Springs.

The pants are also pink, with green stripes at the end of the right leg.

“Won’t stop dreaming” is printed down the other leg. A crown, heart, and crescent moon are pictured.

This tie-dye shirt features Rafiki’s face on the left breast.

The tie-dye colors are orange, green, and pink.

Rafiki’s full body is pictured on the back, meditating under the words “chill vibes only.” This was in Ziwani Traders at Disney’s Animal Kingdom.

This dark grey hoodie was in Island Mercantile at Disney’s Animal Kingdom.

“Mickey Mouse” is in white on the left breast, with two sketches of Mickey’s head at different angles.

The pocket features another sketch of Mickey.

There are more sketches with notes on the sleeve.

The back has “Mickey Mouse” larger across the shoulders.

Mickey is pictured at the bottom with the note “exaggerated chest.”

This grey shirt reads “I don’t dig Mondays” and features Grumpy leaning on his pickaxe.

This was in Bay View Gifts at Disney’s Contemporary Resort.

We found a few new tees at Disney’s Art of Animation Resort.

This one has an ombre of light to dark blue, with “Disney’s Art of Animation Resort” printed down the front side.

This V-neck shirt has a pink ombre, with “Disney’s Art of Animation Resort” printed sideways.

Beneath the resort logo is a sketch of Ariel with some of her fish friends.

Ariel is in full color, while Sebastian, Flounder, and the other fish are not.

This shirt features the same sketch of Ariel, but she is not in full color.

The shirt is solid green, and the Art of Animation Resort logo is smaller beneath Ariel.

Let us know which Walt Disney World merchandise you’ll be taking home from your next visit in the comments.