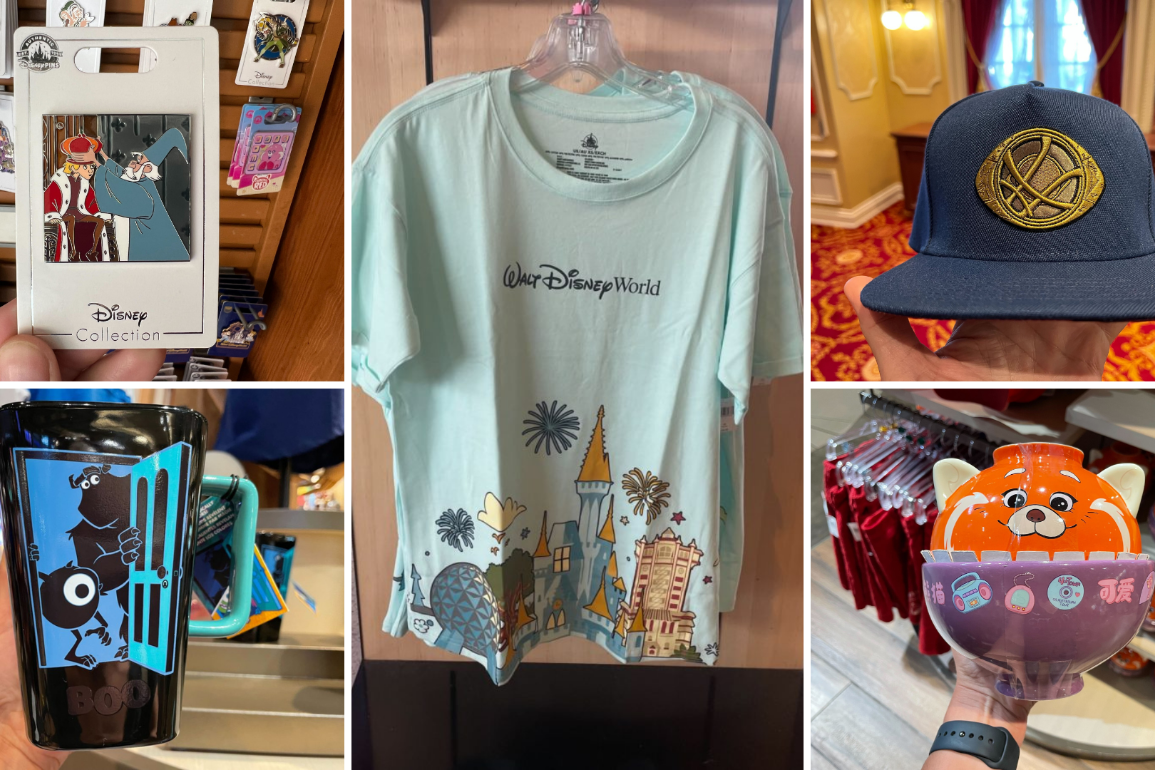 Welcome to the merchandise roundup for April 23, 2022! Each new day brings new merchandise to Walt Disney World, and we know you don’t want to miss a thing, so we gather new releases here. This week we visited EPCOT, Disney Springs, and Magic Kingdom; let’s look at our discoveries.

Several character-themed water bottles are available throughout EPCOT. We already found the matching “Frozen 2” water bottle at The Fjording.

This Minnie bottle was in World Traveler at EPCOT.

Minnie is wearing a pink dress and bow on the side of the yellow translucent bottle.

Her cat, Figaro, peeks through the fence.

There are two images of Minnie.

The cap is yellow and pink.

This bottle is translucent teal and reads “stay cool.”

Mickey is pictured with palm trees and the sun.

In one image, he’s wearing sunglasses and leaning against a tree.

The cap is yellow and red.

This and the rest of the water bottles were in Creations Shop.

This bottle is dark blue and features characters from “Toy Story 4.”

The cap is yellow and red.

They are surrounded by flowers and animals.

Finally, this Grogu water bottle is clear, with a cartoon Grogu face peeking out of the bottom.

It reads, “May the Force be with you.”

The other side features the Mandalorian carrying Grogu in his bag.

Grogu is also hanging off the “Star Wars” logo.

The cap is blue and green.

This white mug features translucent images of Walt Disney and Cinderella Castle against the empty Florida land that Walt Disney World would eventually be built on.

The image is on both sides, outlined in blue.

Between them, the mug reads “Vision” and features this quote from Walt Disney: “It’s kind of fun to do the impossible.”

There are subtle Mickey heads debossed across the mug.

The inside is blue. It was in World Traveler at EPCOT.

We found these two superhero pens in Creations Shop.

This one is shaped like Captain America, with his arm holding his shield up high.

The legs come off to reveal the pen.

The Black Panther pen is shaped like the hero with his arms crossed against his chest.

His legs are also removable to use the pen.

The Walt Disney World logo is on the front and center.

Spaceship Earth, Tree of Life, Cinderella Castle, and The Twilight Zone Tower of Terror are along the bottom, with clouds, flowers, and fireworks around them.

The short sleeves are folded.

This one is made of light purple beads with a seashell charm.

This one is blue with a glass slipper charm.

This one has golden beads with an Enchanted Rose charm.

At World of Disney in Disney Springs, we found this black bottle reading “J’adore Mickey.”

The letters are white against a red heart.

Also in World of Disney is this tie-dye blue bottle.

Mickey’s full body is pictured in black on one side.

This mug is blue with white clouds, just like the classic wallpaper from “Toy Story.”

“Reach for the sky” is printed in different fonts on one side.

This candle holder is white with open dots, and Mickey heads.

It was also in World of Disney.

This mug is black and reads “We scare because we care!” with the Monsters, Inc. logo.

The inside is teal green and says “20th anniversary” for 20 years of “Monsters, Inc.”

When a hot liquid is poured into the mug, the designs will come to life in full color.

Mike and Sulley peek out of a blue door with “Boo” below them.

The handle is teal green.

Randall’s silhouette above “Are we scared yet?” is in another doorway.

This mug was in World of Disney at Disney Springs.

This tie-dye long-sleeved shirt is white, blue, pink, and yellow.

Mickey is at the center, his face, shoes, and shorts also tie-dyed. It reads “Mickey Mouse” and “Classic & Original.”

It has a hood.

This set acts as either two bowls or one bowl with a lid.

The top bowl is the smiling face of Mei in her red panda form.

The bottom bowl is purple with early 2000s icons around the edge.

There is a 4-Town CD, Tamagotchi, and boom box.

All the icons are blue and pink.

There is a pink panda emoji and microphone.

This travel mug is white, with Mickey in his red shorts on one side.

It has a translucent red cap.

We found several new shirts in DisneyStyle. This one is white with pink sleeves and a pink v-neck.

Tiana’s crown is on the left breast.

“I’m not your everyday princess” is embroidered along the bottom.

This shirt is yellow with a tied waist.

Daisy and Donald Duck’s heads are pictured on the left breast with their names.

The ducks are pictured full body on the back.

This light pink tee reads, “Not a prize to be won.”

The letters are black, running down one side of the shirt. A purple version of Genie’s lamp is at the bottom.

“Listen with your heart” is on the pocket.

This purple tank is inspired by Princess Ariel.

“Ready to stand” is around the neckline.

“Sick of swimming” is in the center.

“Bright young woman” is down the side.

A mermaid tail is at the bottom edge of the tank.

These princess shirts are all part of a new “In A Land Far Away” Princess Collection.

This split-color shirt is blue and orange.

“Joy” is in yellow, pink, and teal letters on the orange side.

Joy from “Inside Out” is pictured on the blue side with yellow lines and stars shining around her.

This jacket is yellow and zips up halfway.

The zippers are blue.

It has a high neck.

On the left breast are five orange and blue circles with sketch versions of the “Inside Out” emotions inside.

The sleeves have large orange stripes.

More images of the emotions are on the back.

Joy holds a pink ball next to “It’s a great day!”

Disgust looks disgusted next to a few clouds.

“Don’t talk to me!” is printed next to Fear and “It’s okay to be sad” next to Sadness.

Anger is blowing up.

This jacket and all of the above shirts were in DisneyStyle at Disney Springs.

These new Marvel sweatshorts were in Superhero Headquarters at Disney Springs.

They are black with red stripes down the side. The Marvel logo is repeated along the stripes.

These are part of the Our Universe collection of Her Universe.

They have pockets and a drawstring waist.

This mug resembles Mei in her red panda form.

Her eyes are wide and shining. She has her paws next to her mouth.

Her striped tail is on the back.

This pet tee is blue and features Lilo and Stitch on the back.

Stitch is holding an ice cream cone while Lilo plays guitar. Her doll, Scrump, is next to her, and palm trees are in the background.

This blue cap has a patch of the golden Eye of Agamotto embroidered on the front.

The inside of the cap is checkered reddish-brown and blue with a bird symbol.

This was in Town Square Theater at Magic Kingdom.

Finally, we found this pin at Sunset Ranch Pins and Souvenirs in Disney’s Hollywood Studios.

It features Merlin placing a crown on Wart, a.k.a. King Arthur.