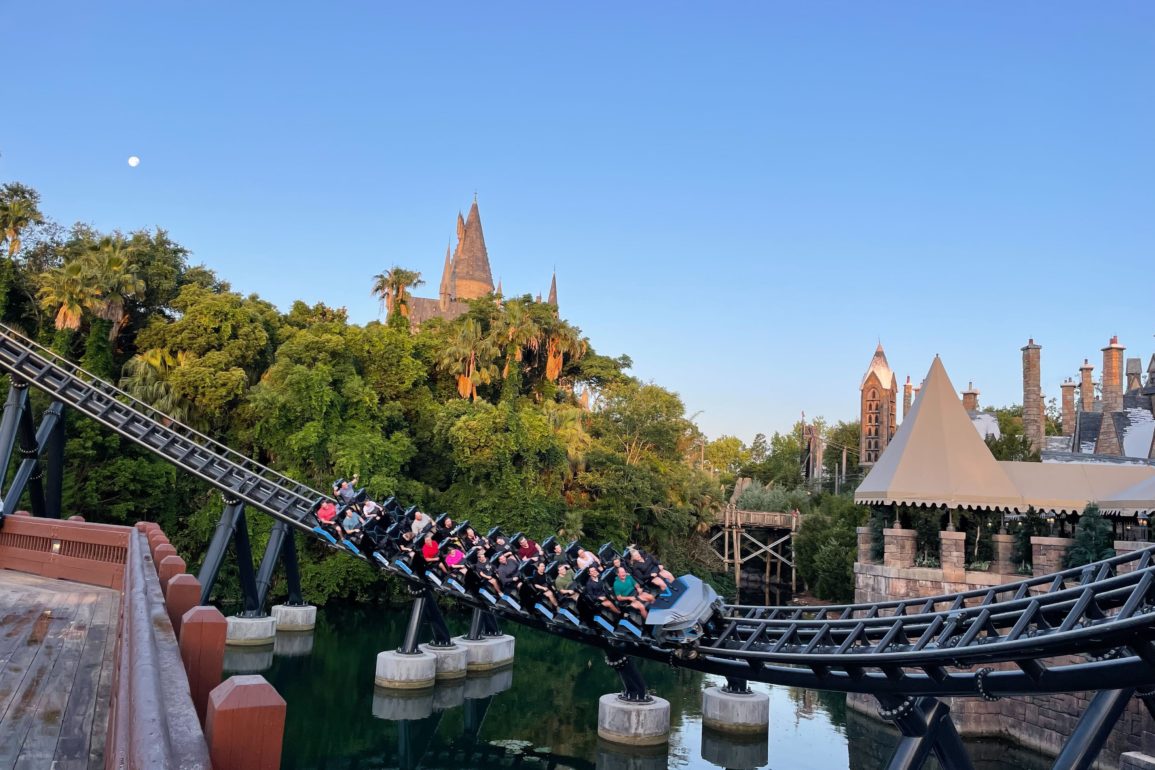 Welcome to another beautiful day here at the Universal Orlando Resort. The holiday weekend might be over, but we’re anticipating another busy day in the parks, so we decided to get up bright and early for Early Park Admission.

Just like most people, we’re heading over to Islands of Adventure first. The lines usually move quickly, so it won’t be long before we’re in the park.

We made it! Now we follow the crowd towards the back of the park.

Nobody turns left in the mornings. Everyone heads towards Seuss Landing to have their room keys or Annual Passes checked for Early Park Admission.

The best way to wake up in the morning is a ride on VelociCoaster.

Right at opening, Hagrid’s Magical Creatures Motorbike Adventure was quoted as a 90 minute wait. VelociCoaster was only a 10 minute wait.

These people made the right decision.

How can we say no to a 10 minute wait? Look at this empty queue!

Even more new Jurassic World: Dominion merchandise has arrived at Jurassic Outfitters. These signs are amazing. Check out all the merchandise currently available, with prices, in our post here.

A new Jurassic World sign has been added behind the register in Jurassic Outfitters. It looks really good!

It’s a little late for Easter, but if you want a bunny ear Minion, you can win one at the skill games in Toon Lagoon.

It’s much busier today than over the weekend. Despicable Me: Minion Mayhem was between 85 and 100 minutes most of the morning.

Central Park Crepes is the breakfast of champions. If you haven’t tried them before, you really must!

It’s busy all over the park, even in Springfield. There are lines for food and rides. Even Kang and Kodos’ Twirl ‘n’ Hurl was at a 65 minute wait!

Diagon Alley is always packed. It looks like a lot of people are still here after the holiday weekend. We’re looking forward to the end of peak season crowds.

The Media Center is open for previews again today. If you qualify, you can participate in a preview and give feedback. It takes around an hour, and you usually get a Universal gift card for your time.

A couple new signs have shown up in the Williams of Hollywood Prop Shop from the Olympics.

Entertainment is out all over the park in full force. Characters are always popular, and even more, now that meet and greets have become more relaxed.

Speaking of new entertainment, some additional Streetmosphere characters named City Force have been added around the Production Central area of the park. They were fantastic and so much fun to watch and interact with. You can watch them in a training session and get more details here.

Thanks for joining us around the parks today. It’s been a busy day, so we’re going to run out of here, but stay tuned to Universal Parks News Today for more updates!

Previous
VIDEO: Disney Admits ‘Finding Nemo: The Big Blue… and Beyond!’ is a New Show, Seems to Indicate Less Performers and More Projections for Summer 2022 Debut at Disney’s Animal Kingdom