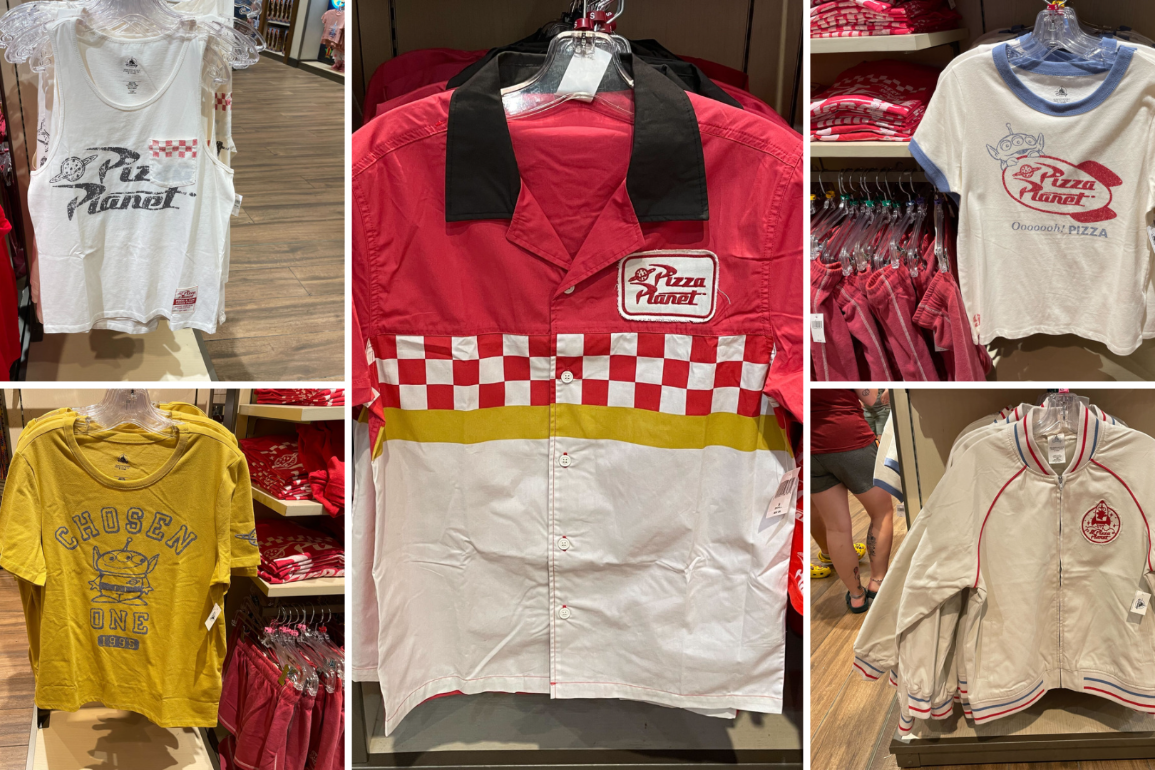 We found the new items with old Pizza Planet merch at World of Disney.

This bomber jacket is white, with red piping and red and blue stripes at the collar, wrists, and waist.

The Pizza Planet logo with a crane machine spaceship blasting off is on a patch on the front.

The Pizza Planet logo is large on the back.

“Food & fun space port serving your local star cluster” is below the logo, with three of the aliens.

This white shirt has a blue collar and blue at the end of the sleeves.

The Pizza Planet logo is red in a spaceship on the front. An alien is outlined in blue peeking out from behind it, and below is “Ooooooh! Pizza” in blue letters.

“95,” which is the year “Toy Story” was released, is in red at the bottom corner of the tee.

These shorts are red.

They have a white drawstring with yellow, red, and blue stripes at the ends.

“Pizza Planet” is stamped in dark red lettering down one leg.

An eponymous pizza planet with rings around it is embroidered at the bottom of the leg.

The shorts have white stitching.

This tee is mustard yellow. In blue lettering, it reads “Chosen one” and “1995.”

One of the aliens is pictured in the center.

The pizza planet is embroidered on one sleeve.

This white tank has the Pizza Planet logo in black on the front.

It’s somewhat weathered, and a pocket overlaps with it as though it has been altered. The pocket has a red check pattern along the top.

A Pizza Planet patch is at the bottom.

This button-up is red, yellow, white, and black.

The collar is black, and the yoke is red.

A Pizza Planet patch is on the left breast.

Below the yoke is a red and white checker pattern, a yellow stripe, and then white.

“Best in the Galaxy” is printed in white on the back, with the Pizza Planet logo and “Delivery Available.”

This button-up is also available at Disneyland Resort.

Will you be wearing any of the new Pizza Planet apparel? Let us know in the comments.