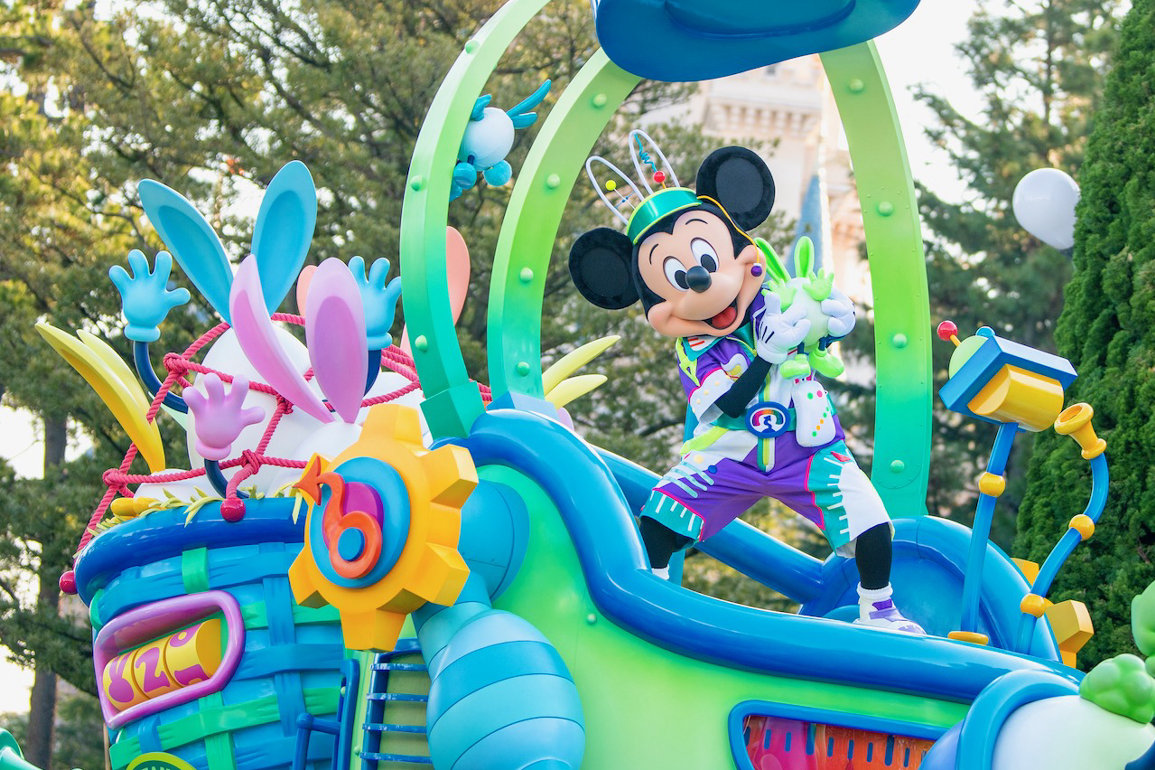 Wacky & Crazy ‘Usatama on the Run!’ Easter Parade Races Back to Tokyo Disneyland for 2022

Red alert, red alert! The Usatamas are on the run, for the first time in three years! Last Friday, the beloved “Usatama on the Run!” returned to Tokyo Disneyland, so naturally we were around to capture the Usatama Chasers hard at work trying to wrangle up the troublesome eggs with bunny ears before they could wreak too much havoc on the park. Keep on reading for photos and a full video of the show, as there have been a few changes!

The action starts with Chip, Dale, and Max leading off the action in the Easter Egg Factory float. Previously, Pluto took the front spot, with dancers where Chip and Dale are now.

Next comes Mickey in his Usatama Chasers lead float, where we can see he’s already caught quite a few of the Usatamas. For the 2022 edition, Mickey has added a new purple accented costume instead of the previous blue accents.

And a special touch for Tokyo Disney Resort fans, the lines from longtime performer Takashi Aoyagi are still part of Mickey’s dialogue. Aoyagi retired from performing as the official voice of Mickey for Japanese audiences in 2018.

Next came the bunny garden float, where Disney bunnies were always represented during the parade. For social distancing reasons, Thumper and Br’er Rabbit no longer appear on the float, leaving only Rabbit, Miss Bunny, and the White Rabbit.

On Minnie’s hot air balloon above the clouds, we see her decked out in a slightly modified outfit compared to previous years.

Donald Duck returned to the front teacup in the café float, same place and costume as before.

Meanwhile Pluto took over the former space for Clara Cluck and a dancer.

Surprisingly, the only change made to the hair salon scene was the massive upgrade of Clarabelle Cow’s costume. This change first debuted in Tokyo with the return of “Dreaming Up!” last spring, and around four years after the change at the other Disney parks.

Daisy Duck and Clarice still stand at the reverse, distanced of course due to COVID-19 protocols.

And finally, since Goofy’s previous “eggsray” machine was driven by a walking Cast Member dressed as a dancer, and parade dancers have yet to return to Tokyo Disney Resort, he has taken up space on the grand finale truck instead, in the former home of Nick and Judy from “Zootopia”.

You can watch a full video of the first performance of “Usatama on the Run” courtesy of our YouTube channel.

You can also watch a video of the 2019 performance if you would like to compare.

The parade is running daily through June 30. Are you excited to see the return of Usatama on the Run? Let us know in the comments below!