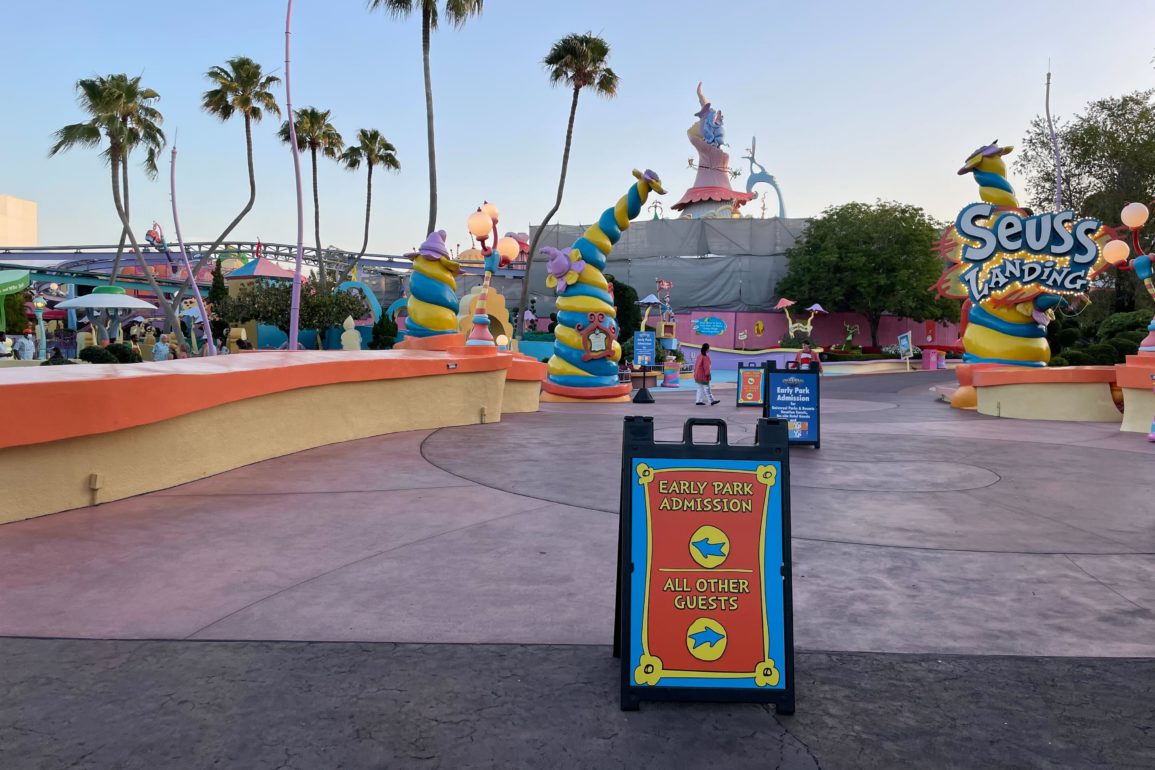 Guide to Early Park Admission at the Universal Orlando Resort: Tips and Tricks to Make the Most of the Morning

Always be sure to check the Universal Orlando app or site to see which park is opening early. Sometimes both parks have Early Park Admission, but other times, only one park will be open early.

There is no way to purchase Early Park Admission, unless you upgrade your ticket to an Annual Pass, but there are still some ways to get a head start on the day. Guests without Early Park Admission can still enter the gates of the theme park, but are not permitted to go further into the parks or to the attractions. Gifts shops and some food locations, including Starbucks, are open at the front of each park so it’s convenient to grab a bite to eat and then wait for the official park opening rope drop.

At Universal Studios Florida, the check point for Early Park Admission is between New York and San Francisco, where you’ll find Team Members ready to check your ticket or room key. Diagon Alley is open for Early Park Admission, so grab a Butterbeer, choose a wand (or let the wand choose you), and take ride on Escape from Gringotts. The Leaky Cauldron is open for breakfast as well or you can always stop into Florean Fortescue’s Ice Cream Parlour. If you get up early on vacation, you deserve to treat yourself to ice cream for breakfast!

Over at Islands of Adventure, guests without Early Park Admission can wait in the Port of Entry area or in Seuss Landing. This will give you an advantage over guests who wait outside the gates, too! You can line up at Marvel Super Hero Island for the official park rope drop or you can make your way into the waiting area in Seuss Landing.

We’re in! Now the difficult decision is whether to go towards VelociCoaster over the bridge or get in the growing line for Hagrid’s Magical Creatures Motorbike Adventure. Here’s a tip! If you’re planning to ride Hagrid’s, the queue is normally in the Lost Continent. Do not make the mistake of running past this line to go to the actual attraction entrance or you will be walking back to the beginning of the barricades. There are signs and Team Members in the area to help guide you, too.

If rides aren’t your thing, this is also a rare opportunity to get some great photos throughout the land. Perform wand magic, take pictures in front of Hogwarts Castle, or grab a pumpkin pasty from Honeydukes and enjoy the magic of the park before it opens for the day.

You can also travel over the bridge into Jurassic Park, but you won’t be able to get beyond the wait time sign for VelociCoaster. If you’re hoping to meet Blue at Raptor Encounter or ride River Adventure, you can wait at these barricades for the official park opening.

It is important thing to keep in mind is that Early Park Admission is not always offered at both parks. As another reminder, you will want to check the Universal Orlando app for the park hours and to see which park or parks are opening early.

Set those alarms, have the caffeine ready, and make sure you get an early jump start to the day at the Universal Orlando Resort. You can watch our guide to Early Park Admission below and see the process in our video below.