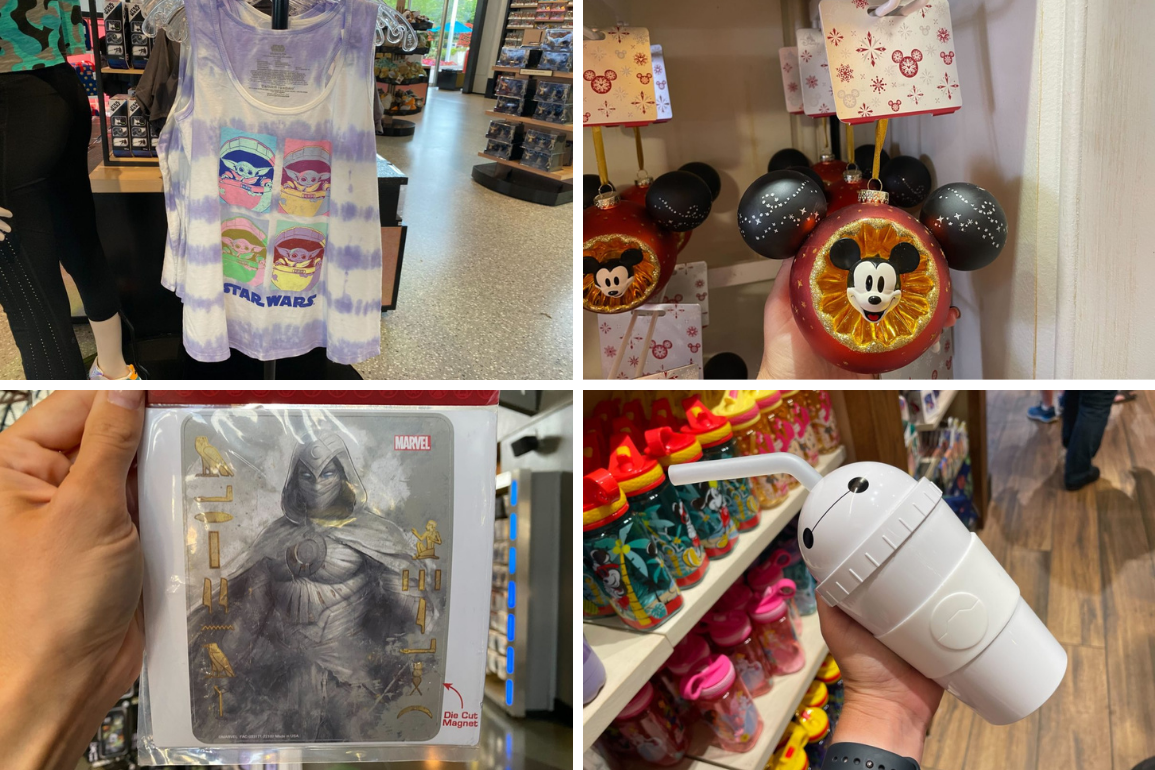 Welcome to the Merchandise Roundup for May 10, 2022! Each new day brings new merchandise to Walt Disney World, and we know you don’t want to miss a thing, so we gather new releases here. This week, we visited EPCOT, Disney’s Animal Kingdom, Disney’s Hollywood Studios, Magic Kingdom, Disney Springs, and Disney’s Art of Animation Resort; let’s look at our discoveries.

This tank top has purple and white tie-dye stripes.

Four colorful images of Grogu from “The Mandalorian” are in the center. The “Star Wars” logo is at the bottom.

This tank was in Creations Shop at EPCOT.

Also in Creations Shop was this heather grey v-neck tee.

It features Mickey winking in a pink heart, with the words “Together again!”

Each lid features either Winnie the Pooh, Piglet, or Tigger.

The Piglet container is the smallest.

The Winnie the Pooh container is mid-sized.

The Tigger jar is the largest.

These were also in Creations Shop.

This golden journal is part of the Disneyland Paris 30th anniversary collection available in Plume et Palette in the France Pavilion.

Tinker Bell’s silhouette, with Sleeping Beauty Castle behind her and stars around her, is on the cover. A star-shaped clasp holds the elastic band in place.

The inside of the cover is patterned with the castle and 30th anniversary logo.

The pages are lined and also feature Sleeping Beauty Castle.

The back has the Disneyland Paris and 30th anniversary logos.

Over at Disney’s Animal Kingdom, we found this new Magnet in Pandora.

It features scenery from Na’vi River Journey. We found it in Windtraders.

This youth shirt is red and features images of the Loth Cat, Therii, and Porg.

The back of the shirt has the Creature Stall logo with a Monkey Lizard dangling from it.

This tee and the one below were both at the Creature Stall in Star Wars: Galaxy’s Edge at Disney’s Hollywood Studios.

This tee is white and features the Dianoga, a tentacled water-dwelling creature most known for trying to eat Luke Skywalker in the first “Star Wars” film, “A New Hope.”

The Dianoga is pictured emerging from the water, with one large green eye extended and its mouth open.

Another one of its eyes is on the back of the shirt.

This new pin was at the cart outside Star Wars: Rise of the Resistance. It’s hexagon-shaped and features R2-D2 rolling towards the ramp of the Millennium Falcon.

This blue phone case has a minimalist image of Ariel, Flounder, and Sebastian.

Small bubbles and seashells are around them.

This was in the Darkroom at Disney’s Hollywood Studios.

These shorts are white with large splotches of color.

The shorts have a drawstring waist and pockets.

Among the splotches of color are outlines of Cinderella Castle.

These were in The Majestic at Disney’s Hollywood Studios.

Mickey’s ornament is red with gold stars. The ears are black with silver stars. Mickey’s face is popping out of the ornament on one side.

The other side has Mickey’s name in red letters. Around the circle holding his name reads “Walt Disney Presents” in blue letters.

Each ornament has a gold ribbon.

Her name is in blue lettering.

This ornament has a green center.

Chip and Dale are smiling on one side.

Their names are in red on the other side.

His name is in red.

Donald’s ornament is blue, of course.

His name is in red.

In Star Traders, we found a new Disney nuiMOs outfit from the Female Empowerment Collection.

This outfit is a hot pink suit with a matching light pink bag.

This phone case is a teal blue with Belle in front of the Beast’s castle on the front.

Belle is in her golden ballgown. Books, roses, Lumiere, Mrs. Potts, and Chip are pictured around her.

This and the other phone case and magnets below were in Tomorrowland Light & Power Co.

This case has a diamond pattern.

Cinderella’s face, pumpkin carriage, glass slipper, and palace are pictured throughout the diamonds.

This magnet has a red web with the three Spider-Men popping out of it.

This rectangular magnet resembles the torn pages of a comic book, with images of three different Spider-Men peeking through.

Moon Knight is pictured on this magnet with Egyptian hieroglyphs in gold around him.

New Apple Watch bands are available in MaDe kiosks at Walt Disney World.

Each band features a minimalist image of a princess on one end and symbols from her film on the other end. Belle’s matches the phone case above.

Rapunzel is pictured with Pascal on her band. The other side has flowers and lanterns.

Merida looks ready to explore the forest on her band. Her brother in bear form, a wisp, her mother’s crown, a cake, and a bow and arrow are on the other side, along with purple and blue flowers.

Mulan is pictured in her green, blue, red, and white outfit on this band. Her dog Little Brother, Cri-Kee, flowers, and fans are on the other end.

Cinderella’s band features her carriage, birds, a glass slipper, and a pumpkin.

Ariel is hanging out with Flounder and Sebastian on her band. The other end has seashells, bubbles, coral, and seaweed in bright colors.

Finally, Moana is pictured on her band with large leaves behind her. Hei-Hei and Pua are pictured among tropical flowers.

The “Moon Knight” magnet we found above is also available through MaDe.

A second “Moon Knight” magnet is black, with the superhero flying down. It reads “The One You See Coming.”

This Belle one is identical to the one available outside the kiosk, but you can customize it with your name and choose different sizes.

This Cinderella case is also identical.

And this is the same as the Ariel phone case we found at Disney’s Hollywood Studios.

We haven’t found these other cases, featuring Moana, Mulan, and Rapunzel, outside of the kiosks yet.

The Moana case has a similar diamond pattern to the Cinderella case. It features Moana, Hei-Hei, and Pua.

The Mulan case has her in front of a green mountain. The images are on a second layer for a 3-D effect.

The Rapunzel case also has a 3-D effect. She holds her long blonde hair up, with Pascal on her shoulder and her tower in the background.

There are also Merida and Tiana cases.

The Merida case has an all-over pattern of Merida, her bear brothers, archery equipment, and plants.

The Tiana case has yellow, green, and orange shapes with the outlines of her, her tiara, lily pads, and frogs.

These two cases have the same two designs as the “Moon Knight” magnets.

Finally, this MaDe case features all three Spider-Men jumping through scaffolding. It has a 3-D effect.

Turn your furry friend into Stitch with this costume shirt.

The shirt includes Stitch’s face and ears on a hood.

His markings are on the back.

There’s a hole in the shirt for a leash to go through.

Two timely Alex and Ani bracelets have arrived at the Emporium.

This one has a silver finish with a Mickey-shaped charm.

This bronze bracelet has a charm shaped like a graduation cap.

It has the year, 2022, debossed on it with a gem in the Mickey-shaped zero.

We found the latest pin in the “Beautiful Florals” collection at Frontier Trading Post.

The top is a shiny, golden flower.

The flower can be slid aside to reveal Aurora holding a pink flower.

This jar is shaped like a beehive, with Pooh bear and “Bee happy” in a plaque on one side.

It includes three wood utensils: a spoon and two different types of slotted spatulas. They are patterned with flowers, bees, and butterflies.

These herb markers can be used in your garden to keep track of your plants.

Each marker is a different color and features either Winnie the Pooh, Piglet, Tigger, a “hunny” pot, or flowers.

There are white rectangles for writing in the herb name.

This mug and the two tumblers below were in World of Disney at Disney Springs.

This cardholder was also in World of Disney.

This hoodie featuring “Inside Out” characters was found at DisneyStyle at Disney Springs.

One of the sleeves is decorated with Disgust, Anger, Bing Bong, and others.

The back of the hoodie features solid colors.

“Inside Out” sweatpants were also found at DisneyStyle. The pants display the phrase “So Many Emotions.”

Character sketches adorn one of the pant legs.

Lastly, some new items were found at the Ink & Paint Shop located at Disney’s Art of Animation Resort, including this pin featuring “The Lion King’s” Simba.

This ornament features Ariel, Flounder, and Sebastian emerging from a colorful ink container.