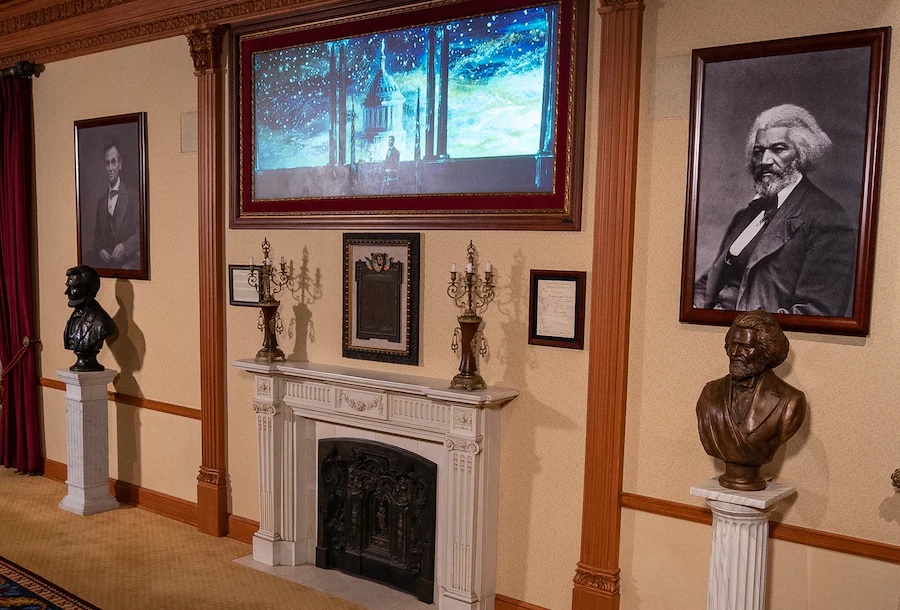 As you may know, Walt Disney was fascinated with the life of Abraham Lincoln from an early age. It’s no wonder then, that our 16th president has had a home on Main Street U.S.A., in Disneyland park since 1965. Guests can experience an entertaining history lesson at the attraction “The Disneyland Story presenting Great Moments with Mr. Lincoln.” Also housed within this building are tributes to inspirational American heroes.

Taking its rightful place among these icons of history is a new installation honoring Frederick Douglass, the great leader in our nation’s fight against slavery. President Lincoln signed the Emancipation Proclamation, a wartime act, which took effect Jan. 1, 1863. It declared that the enslaved in the Confederate states were considered free. However, it took leaders like Douglass to help guide Lincoln towards making the ending of slavery central to winning the Civil War.

This new installation celebrates the relationship between the two distinguished patriots by adding a bust and portrait of Frederick Douglass near the existing bust and portrait of Abraham Lincoln in the lobby of the Opera House, as well as a framed copy of a U.S. Department of the Interior letter recognizing Douglass as a free man. The story of the two leaders and their work together is highlighted between the two busts.

Born in Maryland in 1818, Douglass was enslaved until escaping to freedom in 1838. During his enslavement, he learned to read and write, something that was not easy for someone in slavery to accomplish. This led to his lifelong skills as a great writer and orator. Settling in Massachusetts with his wife Anna Murray, Douglass became a powerful public speaker and joined the abolitionist movement to end slavery. He became a well-known and vocal leader in the movement.

Published in 1845, his first autobiography, “Narrative of the Life of Frederick Douglass, an American Slave” became a national best-seller. This fame led to several meetings between Douglass and Lincoln during which Douglass was vocal in both pushing for the emancipation of the slaves and the inclusion of African Americans in the Union Army.

The Thirteenth Amendment to the Constitution was ratified in 1865, and all slaves, in both the North and the South, were freed.

We are honored to add this tribute to Douglass, as part of ongoing efforts to update attractions to reflect the rich diversity of stories in our world.